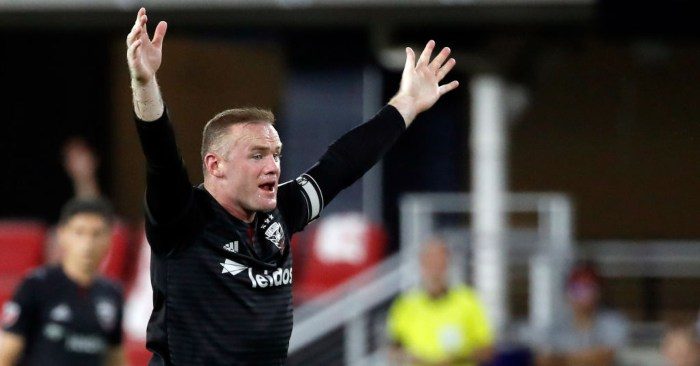 Wayne Rooney lost his head after being subbed off for DC United as they lost 1-0 to Vancouver in the MLS.

The former England captain was replaced in 74th minute and, clearly unhappy about a number of refereeing decisions, aimed his frustrations at the fourth official.

Ronney’s time in the MLS is coming to an end after just one season as he announced he would become player-coach at Derby County.

Rooney can be seen shouting angrily in the official’s face saying: “Every f****** game.”

The former Manhester Utd striker explained his frustrations after the game.

“Because I have my opinions of the referees,” Rooney told Daily Hive.

“It’s not very good. I feel they need to improve the game.

“That’s my opinion, and I feel like I’m entitled to my opinion. I said a couple of weeks ago, I got kicked, and the referees do nothing.

“All I’m asking for is a bit of protection. It’d be nice if Howard Webb (General Manager of the Professional Referee Organization) could come to the training ground, and let us speak to him over it.

“I feel it’s happening, game after game. To get some clarification, it’d be nice if Mr. Webb come down to the training ground to speak with us.”

Rooney will leave DC United at the end of the season and team up with Phillip Cocu and Derby County in January.