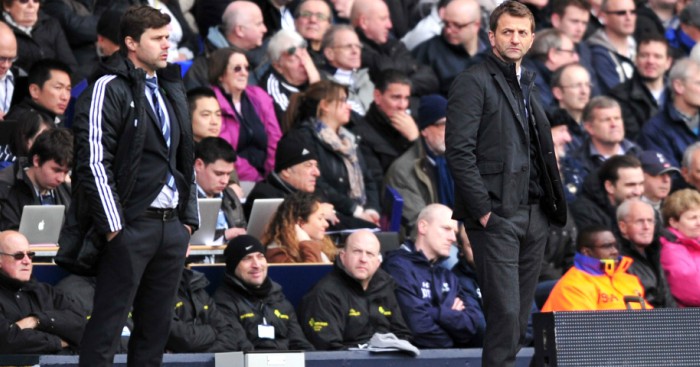 Jurgen Klopp’s superior record over Pep Guardiola has been widely discussed ahead of a massive midweek but the Manchester City boss has a worse points-per-game ratio against two other former Premier League bosses. And what about everyone else? (Criteria: only managers who have faced each other three times or more in league and cup are included…)

Arsene Wenger – Roy Evans (P4, D1, L3 – PPG 0.25)
The Arsenal boss has struggled against Jose Mourinho (played 18, won two) and Pep Guardiola (played 14, won three) but in four attempts, Wenger never managed to get one over on Roy Evans. Between March 1997 and August 1998, Evans’ Liverpool won three and drew the other meeting, with Arsenal managing only one goal – a late Ian Wright strike to halve a deficit the Gunners never retrieved in 1996/97.

Eddie Howe – Pep Guardiola (P4, L4 – PPG 0)
Four meetings with Pep have seen Howe’s Bournemouth concede 12, score just one (but what a goal it was…) and take no points. No real shame in that, especially when you consider how close they came to earning a draw at Dean Court last August.

Chris Hughton – Roberto Mancini (P3, L3 – PPG 0)
Three meetings as manager of three different clubs over three seasons saw Hughton fail to get anything out of Mancini’s City. The Brighton boss saw his Newcastle team lose 2-1 in 2010/11; Birmingham were dumped out of the League Cup the following season; City beat Norwich 4-3 at Carrow Road in Mancini’s final season in the Premier League.

Sean Dyche – Arsene Wenger (P6, L6 – PPG 0)
The Burnley boss has come tantalisingly close to taking a point off Wenger’s Arsenal on a couple of occasions in recent years, but late goals have seen the Frenchman retain his 100% record over six meetings since November 2014. The last five of those defeats have been by a single goal, with Dyche watching his side concede after the 90-minute mark in the last three. Unlucky.

Antonio Conte – Jurgen Klopp (P3, D2, L1 – PPG 0.67)
Only three coaches have met Conte more than once and won each time, with Juup Heynckes, Joachim Low and Andrea Agostinelli all triumphing on the two occasions they have faced the former Juventus and Italy boss. The Chelsea manager has met Klopp’s Liverpool on three occasions, with a couple of 1-1 draws following the 2-1 defeat at Stamford Bridge last season.

Roy Hodgson – George Graham (P3, L3 – PPG 0)
The former Arsenal boss is the only rival that Hodgson has faced more than twice and tasted nothing but defeat. But Graham’s three wins over Hodgson came as Leeds manager, when the Whites beat Roy’s Rovers three times in under a year between September 1997 and August 1998.

Sam Allardyce – Steve Coppell, Brian McDermott and Pep Guardiola (P3, L3 – PPG 0)
Big Sam has lost all three encounters with Guardiola, but there is a link between Coppell and McDermott’s perfect records. Both were managing Reading while they beat Allardyce, with the Royals being the former England boss’s apparent bogey team. Allardyce has a worse points-per-game record against Reading than against any other club he has faced more than once as a manager. Go figure.

David Wagner – Neil Warnock, Slavisa Jokanovic, Pep Guardiola (P3, D1, L2 – PPG 0.33)
Former Chemnitzer FC boss Gerd Schadlich has faced the Huddersfield manager three times and beaten him on every occasion, but those meetings were in the German third tier when Wagner was in charge of Borussia Dortmund’s second team, so we’ll leave that there. Wagner has at least taken a draw from three clashes against each of Warnock, Jokanovic and Guardiola.

Claude Puel – Jacques Santini (P5, D1, L4 – PPG 0.2)
Antonio Conte is the Premier League-based manager against whom Puel has struggled most (P4, D1, L3) but former Lyon and Auxerre coach Santini – who lasted 13 games at Spurs –  has one extra win on his record over the former Monaco and Lille boss.

Jurgen Klopp – Thomas Doll (P4, D1, L3 – PPG 0.25)
The Liverpool boss has never faced another manager three times or more without picking up at least draw. To find his nemesis, we have to go back to his time in charge of Mainz, where he failed to beat Doll’s Hamburg in four meetings between January 2005 and November 2006. Former Germany international Doll is now managing Ferencvaros in Hungary.

Pep Guardiola – Roberto Di Matteo, Ronald Koeman (P3, D2, L1 – PPG 0.67)
Only Carlo Ancelotti has faced Guardiola more than once and beaten him on each occasion. The City boss’s worst points-per-game record against foes faced three times or more comes against Di Matteo – across spells at Chelsea and Schalke – and former Everton manager Koeman. Klopp’s name also stands out, with the Liverpool boss having won six of their 12 meetings.

Jose Mourinho – Pep Guardiola (P20, W4, D 6, L10 – PPG 0.9)
Kevin Keegan’s name appears on the list of managers to have faced Mourinho more than once without being defeated by the Manchester United boss. But Guardiola remains Jose’s biggest nemesis, with the Portuguese having won only four and lost ten of their 20 meetings while Mourinho has been in charge at Inter Milan, Real Madrid, Chelsea and United. The scoresheet reads Pep 30-21 Jose.

Rafael Benitez –  Guus Hiddink, Claude Puel, Carlos Carvalhal and Luis Fernandez (P3, D1, L2 – PPG 0.33),
Over a 23-year managerial career with 11 clubs, Rafa has never faced a manager three times or more without earning at least one draw. That, though, is all he’s got out of Hiddink, Puel, Carvalhal and ex-Athletic Bilbao and Espanyol coach Fernandez.

Mark Hughes – Antonio Conte (P4, L4 – PPG 0)
When Hughes basically chucked it in before Stoke faced Chelsea over Christmas, perhaps he had his previous record against Conte in mind. Another five past the Potters on December 30 made it 14 goals conceded in four meetings. The bad news is that Hughes’ new club Southampton face Chelsea next week. If they weren’t already struggling…

Paul Lambert – Sir Alex Ferguson (P4, L4 – PPG  0)
Lambert failed to get anything other a glass of red out of his fellow Scot in four meetings with Manchester United while managing Norwich and Aston Villa. The Stoke boss has a similarly pointless record against Rafa Benitez over three clashes.

Carlos Carvalhal – Aitor Karanka, Garry Monk (P3, L3 – PPG 0)
The Swansea boss seems not to relish meeting Middlesbrough, with three defeats in three matches against Karanka’s Boro, while it was a 2-1 home defeat to Monk’s Middlesbrough that led to Carvalhal’s sacking as Sheffield Wednesday boss in December. Still, four days later he ended up with the Swans job in the Premier League…

Mauricio Pochettino – Tim Sherwood, Juan Ignacio Martinez (P3, L3 – PPG – 0)
It must have escaped Sherwood that he has a 100% record over the manager who replaced him at Spurs; you would expect him to bring it up in almost every conversation he ever has about anything. Those three victories include a couple of 3-2s over Poch’s Southampton before Sherwood returned to the Lane with Villa and left with the points in April 2015 thanks to Christian Benteke’s only goal. Less interestingly, Martinez’s trio of wins came as Levante boss while Pochettino was charge at Espanyol.

Javi Gracia – Carlo Ancelotti, Marcelino, Unai Emery (P6, D1, L5 – PPG 0.17)
The Watford boss never managed to beat Real Madrid, Villarreal or Sevilla in a total of 21 attempts with three different sides in La Liga. He did, though, succeed in turning over Barcelona at the Nou Camp once with Malaga.

Alan Pardew – Roberto Mancini (P5, L5 – PPG 0)
Darren Moore hasn’t yet popped his managerial cherry so Pardew is included in a list of Premier League bosses probably for the final time. Mancini will presumably be sorry to see him leave the top-flight stage given Pardew’s Newcastle were always good for three points when he was in charge of Man City.

David Moyes – Manuel Pellegrini (P4, L4 – PPG 0)
Perhaps this offers some context for Moyes’ comment about Manchester United ‘aspiring’ to reach City’s level after the the then-Red Devils boss oversaw another derby defeat. Those words slipped out after the fourth time in four meetings that Pellegrini had beaten Moyes – twice with City while Moyes ruined United, and another two occasions with Villarreal when the Scot was in charge at Everton. Perhaps Moyes just ‘aspired’ to be like Pellegrini and got his words calamitously wrong.