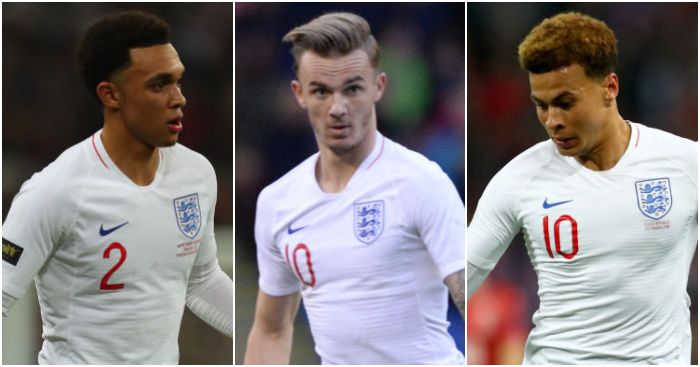 England Under-21s play their first fixture at this summer’s European Championship on Tuesday. Aidy Boothroyd’s squad contains players from ten different Premier League clubs. But who is the best possible representative for every top-flight side at Under-21 level?

To be eligible, the player must have been born on or after January 1 1996.

Arsenal are not lacking in young English bucks, with Reiss Nelson jumping to the head of a particularly long queue after a loan spell in Hoffenheim that reaped seven Bundesliga goals. He is at the Euros this summer and is already looking forward to returning to the Emirates, saying: “Arsenal is my main goal. After the Euros I’ll look to go back to pre-season, do that very strong and hopefully play for the team I love.”

Aston Villa – Andre Green
While Villa started their Championship play-off final with two eligible England Under-21 players in Tammy Abraham and Axel Tuanzebe in their starting line-up, neither of those actually belong to them. But stepping off the bench was winger Andre Green, who was recalled from a loan spell at Portsmouth and started seven games in the second half of the season. Fans will long remember the 94th-minute equaliser as Villa came back from three goals down against Norwich in February…

"O'Connell's mistake, McGinn, Green!!! They've thrown it away! Another error and they pay the heaviest price! What a scene at Villa Park!"

Nine goals in 17 England Under-21 games is quite the return for Dominic Solanke, who joined Bournemouth in January for an eye-watering £19m. Ten Premier League appearances later, he is yet to score a goal for the Cherries, where he is facing stern competition in the form of Callum Wilson and Josh King. But for England’s Under-21s – whose shirt he will be wearing this summer – he is the don, scoring six goals in his last six games at that level.

Slim pickings here, as the only eligible players who got even a minute in Brighton colours last season were Ben Barclay and Will Collar, both of whom have been released this summer. So we turn again to left-back George Cox, who at least has another year on his contract after heart surgery and a loan move to Northampton Town. Which is an unusual brace.

Having been selected last season on the basis of one minute’s football for Burnley, McNeil emphatically gets the nod now after 1,598 Premier League minutes and a call-up to the England Under-20 side that struggled at the Toulon tournament. In reality, he is more than good enough for the England Under-21s but Aidy Boothroyd does like his favourites.

L'Equipe's list of world's top 50 young (20 or under) players includes:

Quite the list of players available to prospective Chelsea manager Frank Lampard next season, though Aidy Boothroyd was robbed of Callum Hudson-Odoi by injury this summer. He had already been robbed of his services once this year, when Hudson-Odoi turned up for U-21 duty in March only to be told he was wanted by actual England boss Gareth Southgate. This is the winger desperately wanted by Bayern Munich despite playing only a handful of games for Chelsea, who finally integrated him into their starting XI in time for him to rupture his Achilles in April.

So good that Manchester United might have to make him the most expensive uncapped footballer in the actual history of football to get him to Old Trafford. The right-back will surely make the step up to Southgate’s senior squad in September, regardless of where he is playing his football.

Ademola Lookman might be the more naturally talented of that pair but it is Dominic Calvert-Lewin who took advantage of a lack of senior strikers in Marco Silva’s squad and started half of Everton’s Premier League games last season. So it is Calvert-Lewin who goes to the European Championship this summer (alongside Kieran Dowell and Jonjoe Kenny) with a pretty impressive record of seven goals in 15 Under-21 games.

What a great job Brendan Rodgers has inherited at Leicester, with a whole raft of young English players, all of whom played over 700 minutes of football for the club last season. Although it was Ben Chilwell who went to the Nations League with grown-up England, James Maddison is probably the pick of the bunch; everybody knows by now that he created more chances than any other player in the Premier League last season.

On tonights performance England are crying out for a ‘James Maddison type play-maker’, one in fact who is English and has the midfield creative stats of erm, James Maddison. Also the ability to be great at set pieces and free kicks would be good. Anyone know of such a player? 🤔

Champions League winner. England international. He could be Liverpool’s next Jamie Carragher or (almost) Steven Gerrard: A genuine one-club hero. And he’s still only bloody 20.

Don’t fret about him not getting enough football – he is just 19 years old and played over 1,000 minutes of football for the best team in England this past season. He is doing just fine, thank you. Gareth Southgate recently named Foden along with Hudson-Odoi, Morgan Gibbs-White and Brewster of the Under-17 world champions as part of a ‘”really exciting group”.

Yep, still eligible. Which is a handy reminder of how much he has achieved at the age of just 21 – 170 senior appearances for Manchester United and 32 England caps. The bad news for United is that he is now just one year from being a free agent and can pretty much name his price.

It now seems remarkable that Sean Longstaff was not on the radar for club or country this time last year. Nobody outside of Newcastle had noticed that a young player had gone on loan to Blackpool and come much improved. He was given a chance in early 2019 and for two months he was a first-choice player for Newcastle in the centre of midfield before a knee injury curtailed his season. Now he is a target for Manchester United, which sounds perfectly reasonable.

Norwich City – Max Aarons
Ah, another excellent English right-back who grabbed that place for the Canaries in early September and never looked back. Max Aarons is still only 19 – and is yet to become an England Under-21 international, though that will surely come – and is already being talked about as a potential alternative to Aaron Wan-Bissaka at club level. The kid is proper good.

Max Aarons: Completed more dribbles (56) than any other teenager in the Championship last season

Sheffield United – Kean Bryan
Dean Henderson and Kieran Dowell were only borrowed last season so we turn to centre-half Kean Bryan, probably better known for being the boyfriend of Coronation Street star Brooke Vincent, who is pregnant with their first child. Congratulations. They met when Bryan was coming through the ranks at Manchester City, the club he left last summer to sign a long-term deal with Sheffield United after a successful loan spell with Oldham. Bryan played only once for the Blades last season – in the FA Cup – as injury, illness and a settled promotion-chasing side combined to limit his opportunities.

There are more than a few young English players for Ralph Hasenhuttl to build around next season, but the pick of the bunch is Angus Gunn, who was the Saints’ first-choice keeper towards the end of last season. He is in Italy this summer, though he is expected to be restricted to bench duties behind Manchester United man Dean Henderson. Next season he will hope to challenge Jack Butland for the right to sit on a different England bench.

Astonishingly still eligible for England Under-21 duty even though his career at full England level feels like it has peaked and troughed (he dropped out of the 23 in our latest England ladder). Let this be a timely reminder that he is still only 23 and yet has played over 300 senior games for MK Dons at Tottenham. He probably needs a break this summer, as funny as it would have been to see him called up for Under-21 duty.

We are not sure anybody wants to follow Jerome Sinclair (last seen on loan at Oxford) and Randell Williams (joined Exeter in January) in this particular section. But Ben Wilmot should be a better prospect, with the 19-year-old centre-half already having a Udinese loan spell under his belt. With a few ageing Watford players likely to leave over the next 12 months, the England Under-20 man has half a chance of breaking through.

Grady Diangana was on nobody’s radar last summer but he took the chance of a Carabao Cup clash with Macclesfield in September and never looked back, making 17 Premier League appearances as Manuel Pellegrini looked for wide alternatives to the injured Andrei Yarmolenko. It’s worth noting that Declan Rice hits the ‘English and born after January 1 1996’ criteria but he had already played in the European Championship back when he was still Irish.

“He was really close and he was close enough that I went to Wolves and had dinner with Nuno and had a good chat with him and his coaches,” said Boothroyd in March as he discussed how near 19-year-old Morgan Gibbs-White came to an England Under-21 call-up in March. The chat obviously well well because Gibbs-White was the only uncapped player to be named in England’s European Championship squad in May. It marked a wonderful season in which he played in 26 Premier League games, which must have been beyond his wildest dreams when Wolves were promoted.

England U21 squad for the Euros. Morgan Gibbs-White in for the first time. Better balance than many previous squads. Walker-Peters, Tom Davies + Ade Lookman ever presents but have run out of time to change their form/club situation + fair play, Boothroyd hasn’t been sentimental. pic.twitter.com/QQWWIr4p4r