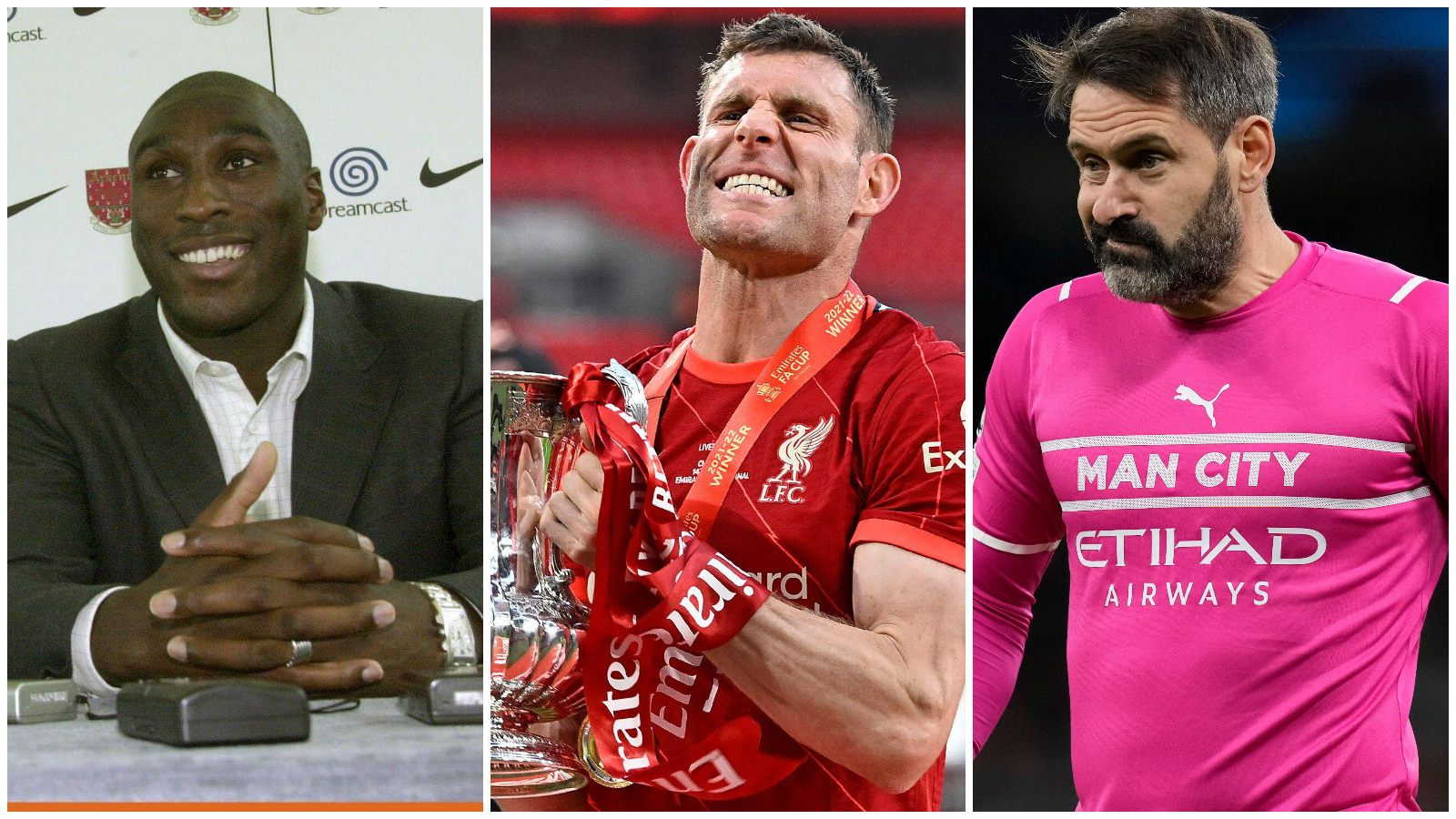 There are a whole raft of free transfers available this summer – from Jesse Lingard to Paul Pogba and back again.

Here are some of them in a handy XI format. As Lingard is described by some as a ‘low-risk transfer’ we look at all 20 Premier League clubs and their big free hit.

ARSENAL: Sol Campbell
This one is a no-brainer. The same was said of another Arsenal free transfer, mind. Campbell was not just Arsenal’s greatest Bosman signing but one of the most successful in Premier League history. A defensive colossus, two Premier League titles made him a hero even without the priceless Tottenham banter. He was so good they signed him twice. It’s also a shame they signed him twice.

ASTON VILLA: Thomas Hitzlsperger
Der Hammer. Der great signing on a free youth transfer from Bayern Munich. He left five years later as a Villa cult hero with 110 appearances, 13 goals and a lovable Brummie accent. “The move abroad to Birmingham and Aston Villa has changed my entire life and was probably one of the best moves I ever made,” he later said. Sending the 18-year-old to live with Villa fans in Sutton Coldfield turned out to be a bostin’ move. Maybe they should do the same with Boubacar Kamara.

BOURNEMOUTH: Josh King
There was little evidence that Norwegian international King could establish himself in the Premier League when he signed from Blackburn in 2015 after a season which featured just one Championship goal. But Eddie Howe clearly saw a spark of magic; he was rewarded for his faith with 48 Premier League goals in four seasons with the Cherries before he left for Everton after half a season of pretty poor Championship football.

BRENTFORD: Christian Eriksen
The tragedy that befell Eriksen at Euro 2020 (and Thomas Frank being Danish) made it possible for a lovely Premier League club to sign one of the great Premier League midfielders of the last decade. He rejuvenated what was fast becoming an ailing season and left at the end of the season with many, many more suitors for his signature. And he could still choose to re-join Brentford.

BRIGHTON: Bruno
“Once a Seagull, always a Seagull,” were the final words of Bruno’s farewell speech after seven years at Brighton as right-back and mostly captain. He was true to his word as he remains there in a coaching capacity, the Mr. Miyagi to Tariq Lamptey’s Daniel. Few predicted such loyalty when Gus Poyet negotiated the arrival of the 31-year-old Spaniard in 2012. He would go on to help Brighton into the Premier League, being voted into the PFA Championship Team of the Year in successive seasons.

CHELSEA: Ruud Gullit
Some genuine competition here with Michael Ballack and Gus Poyet also making excellent cases, but the nod goes to Gullit because this was a ‘sit up and take notice’ signing, an actual legend joining a club that carried the stench of Dennis Wise, Gavin Peacock and Frank Sinclair. This was when the new Chelsea was born, with Gullit taking over as player-manager the following year and bringing players like Gianfranco Zola and Gianluca Vialli to these shores. Chelsea could fill this list by themselves.

CRYSTAL PALACE: Mile Jedinak
Max Meyer looked like a candidate in the making when he joined, while Vicente Guaita will surely warrant inclusion with a few more quietly impressive seasons. But let’s ignore recency bias and credit Mile Jedinak, his beard and five years that brought nothing less than 100% effort and promotion to the Premier League. “To everyone who has been my family the last five years at SE25. To say it has been an emotional roller coaster is a bit of an understatement,” said Jedinak as Alan Pardew inexplicably allowed him to leave for Aston Villa.

EVERTON: Gareth Barry
The template was there for Liverpool to make their inspired James Milner signing as Everton had brought in another English midfield stalwart from Manchester City on a free transfer the year before. Barry had already enjoyed a season-long loan and in four seasons with the Toffees he predictably made over 150 appearances, never giving anything less than full commitment.

653 – Gareth Barry made more Premier League appearances than any other player in the competition’s history, managing a century of games at three different clubs across his career (Aston Villa, Manchester City and Everton). Tenure. pic.twitter.com/mQRW7R245P

FULHAM: Mark Schwarzer
With apologies to Carlos Bocanegra and Kit Symons, as well as Europa League finalists Zoltan Gera, Danny Murphy and Simon Davies, the nod must go to Mark Schwarzer of being Australian fame. How many other players can claim to have reached European finals with two different Premier League clubs? A few, perhaps. But who can say they did it with Middlesbrough and Fulham? Well that would be Schwarzer, whose Wikipedia page reliably informs us is ‘regarded as one of the greatest Premier League goalkeepers of all time’. He did win consecutive top-flight titles without playing a single game, after all. As for Fulham, they finished between 7th and 12th in his five seasons at the Cottage, then suffered relegation straight after he left for Leicester.

LEEDS UNITED: Luciano Becchio
Pablo Hernandez and Harry Kewell probably want a word but they will only play second fiddle at best when it comes to the hearts of Leeds fans.

LEICESTER CITY: Marc Albrighton
It doesn’t get much better than joining a newly promoted side on a free transfer and then winning the Premier League within two years. Discarded by Aston Villa, Albrighton was quite some deal by Nigel Pearson in 2014; he has since played 218 Premier League games for the club and still has two years left on his contract.

LIVERPOOL: James Milner
Who else but the man on the verge of his eighth season with Liverpool who has played in about eight positions and never given less than all his heart in every one? Liverpool signed a double Premier League winner on a free transfer and gained the fittest man on Merseyside who has scored 26 goals in 289 appearances and been instrumental in winning the Premier League and Champions League. A move that was supposed to be a swansong is already the longest and most rewarding of his career, with no suggestion he is winding down anytime soon. The ultimate jack of no trades and master of all.

MANCHESTER UNITED: Zlatan Ibrahimovic
A serial title winner and ridiculous goalscorer (and scorer of ridiculous goals), the Swede was a sticking plaster of a striker signing from Jose Mourinho in 2016 but he helped the club to League Cup and Europa League glory while lending them the illusion of glamour. His 28 goals from 46 games made a second contract too tempting to resist, though that ultimately proved to be a mistake.

NEWCASTLE UNITED: Demba Ba
The really quite brilliant Ba scored 29 goals in 58 appearances for the Magpies over 18 months after joining on a free transfer from West Ham after their relegation. His 16 Premier League goals were vital in Newcastle’s unlikely fifth-place finish under Pardew, but in January 2013 he quite understandably jumped at the chance to join Chelsea and Newcastle were quite happy to accept £7m for a player that had cost them bugger all.

NOTTINGHAM FOREST: Andy Reid
Steve McClaren did not get many things right as Nottingham Forest manager but his one gift to the club was the return of Reid, who had started his career at the club before joining Tottenham in 2005. Six years later he was back after a poor spell at Blackpool and expectations were low. It turned out that once he was fit, he was brilliant; he was named in the Championship Team of the Year in 2013/14 at the age of 31 and when he retired two years later, he joined the coaching staff. A genuine legend.

WEST HAM: Teddy Sheringham
West Ham’s propensity for big wages has led to some marquee names arriving for free, with Jack Wilshere, Pablo Zabaleta and, erm, Alvaro Arbeloa arriving in the last five years. But the daddy of all their free transfer signings was Teddy Sheringham, who casually scored 20 Championship goals at the age of 38 to help them back into the Premier League. And then he stayed to play games and score the occasional goal.

WOLVES: Max Kilman
In August 2018, the Wolves website posted an update stating that ‘Max Kilman, Alexander Molberg and James Pardington have joined Wolves Academy in a triple deadline day transfer’. Four years later, Kilman is an integral part of the Wolves defence and has been linked with a £30m move to Chelsea. And he cost the square root of f*** all from Maidenhead United. It’s not gone quite so well for Molberg (Næsby in third tier of Danish football) or Pardington (released this summer by Wolves).