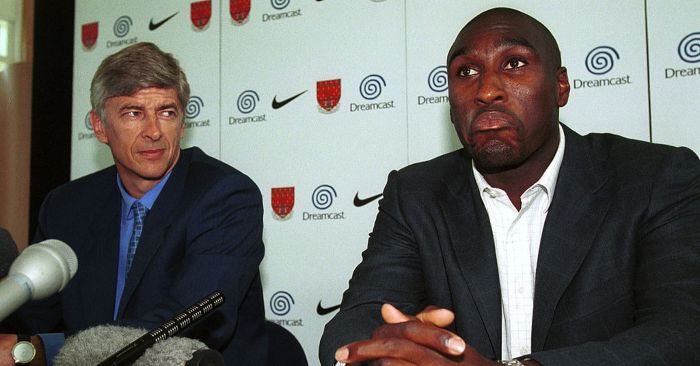 ARSENAL: Sol Campbell
This one is a no-brainer. Not just Arsenal’s greatest Bosman signing but one of the most successful in Premier League history. A defensive colossus, two Premier League titles made him a hero even without the priceless Tottenham banter. He was so good they signed him twice.

BOURNEMOUTH: Josh King
There was little evidence that Norwegian international King could establish himself in the Premier League when he signed from Blackburn in 2015 after a season which featured just one Championship goal. But Eddie Howe clearly saw a spark of magic; less than five years later he has scored 44 goals in 144 Premier League games and has started eight of nine top-flight games this season. He has been linked with a £25m return to his first club Manchester United, which would bring Bournemouth a tidy profit and Twitter a meltdown from underwhelmed United fans around the world.

BRIGHTON: Bruno
“Once a Seagull, always a Seagull,” were the final words of Bruno’s farewell speech after seven years at the club as right-back and mostly captain. He was true to his word as he remains there in a coaching capacity, having become an adopted son of the city. Nobody saw that coming when Gus Poyet negotiated the arrival of the 31-year-old Spaniard in 2012. He would go on to help Brighton into the Premier League, being voted into the PFA Championship Team of the Year in successive seasons.

BURNLEY: Tom Heaton
Sean Dyche’s very first signing for Burnley in 2013 was a former Manchester United goalkeeper who had been on trial at Bristol City 12 months before. And what a signing he turned out to be; six years later he left for £8m having played 200 games for the Clarets which featured two promotions and three England caps. “Tom has been a terrific servant to the club, as an individual, for the team and for the fans,” said Dyche.

CHELSEA: Ruud Gullit
Some genuine competition here with Michael Ballack and Gus Poyet also making excellent cases, but the nod goes to Gullit because this was a ‘sit up and take notice’ signing, a genuine legend joining a club that carried the stamp of Dennis Wise, Gavin Peacock and Frank Sinclair. This was when the new Chelsea was born, with Gullit taking over as player-manager the following year and bringing players like Gianfranco Zola and Gianluca Vialli to these shores.

CHELSEA REWIND: All this talk & speculation about Neymar coming to Chelsea got me thinking back to the summer of 1995. When Glenn Hoddle signed Ruud Gullit literally no one could believe it. I’m not saying we’re going to sign him but never say never.👇 pic.twitter.com/iK6xOM6acK

CRYSTAL PALACE: Mile Jedinak
Max Meyer looked like a candidate last year, while Gary Cahill and Vicente Guaita could yet make long-term cases, but let’s ignore recency bias and credit Mile Jedinak, his beard and five years that brought nothing less than 100% effort and promotion to the Premier League. “To everyone who has been my family the last five years at SE25. To say it has been an emotional roller coaster is a bit of an understatement,” said Jedinak as Alan Pardew inexplicably allowed him to leave for Aston Villa.

LEICESTER CITY: Marc Albrighton
It doesn’t get much better than joining a newly-promoted side on a free transfer and then winning the Premier League within two years. Discarded by Aston Villa, Albrighton was quite some signing by Nigel Pearson in 2014; he has since played 186 games for the club and still has a part to play for the Foxes as they attempt to take advantage of the disarray beneath them in the Premier League.

LIVERPOOL: James Milner
Who else but the man now in his fifth (and last? As if.) season with Liverpool who has played in about eight positions and never given less than all his heart in every one. Liverpool signed a double Premier League winner on a free transfer and gained the fittest man on Merseyside who has scored 24 goals in 188 appearances and been instrumental in reaching two Champions League finals.

The best player @Evra has ever played against?

MANCHESTER UNITED: Zlatan Ibrahimovic
A serial title winner and ridiculous goalscorer (and scorer of ridiculous goals), the Swede was a sticking plaster of a striker signing from Jose Mourinho in 2016 but he helped the club to League Cup and Europa League glory while lending them the illusion of glamour. His 28 goals from 46 games made a second contract too tempting to resist, though that ultimately proved to be a mistake. He is currently hitting close to a goal a game in MLS and still believes that he is better than every other player on this list put together.

NEWCASTLE UNITED: Demba Ba
The really quite brilliant Ba scored 29 goals in 58 appearances for the Magpies over 18 months after joining on a free transfer from West Ham after their relegation. His 16 Premier League goals were vital in Newcastle’s unlikely fifth-place finish under Alan Pardew, but in January 2013 he quite understandably jumped at the chance to join Chelsea and Newcastle were quite happy to accept £7m for a player that had cost them bugger all.

NORWICH CITY: Teemu Pukki
Anybody who remembered Finnish striker Pukki from his spell at Celtic would not have got too giddy about him signing for Norwich, even on a free transfer. But last season he delivered 29 Championship goals to be named Player of the Year for both club and division. This season he shrugged off suggestions that the Premier League would be a step too far, scoring six goals in his first five games at that level. Even if he never scores again, he is still a Norwich (free) hero.

SHEFFIELD UNITED: John Fleck
Two promotions in three seasons for the man signed from fellow League One side Coventry City in 2016; that’s quite the return for absolutely no money. Fleck has twice been voted Sheffield United Player of the Year and would be a contender this season as the 28-year-old has taken to the Premier League like it was Sunday football. “We brought him in on a free transfer from Coventry when we were in League One and he’s embraced every level since and moved forward,” said Chris Wilder as Fleck’s form was rewarded with a Scottish call-up.

WATFORD: Heurelho Gomes
The Brazilian joined Watford on a one-year contract in 2014 and he is still there, first announcing and then renouncing his retirement this summer. Gomes led the Hornets to promotion in his first season and was their Player of the Year in their first season back in the Premier League. He loves Watford and Watford loves him.

WEST HAM: Teddy Sheringham
West Ham’s propensity for big wages has led to some big names arriving for free, with Jack Wilshere, Pablo Zabaleta and, erm, Alvaro Arbeloa arriving in the last three years. But the daddy of all their free transfer signings was Teddy Sheringham, who casually scored 20 Championship goals at the age of 38 to help them back into the Premier League. And then he stayed to play games, score the occasional goal and set records in his 40s in the top flight.

WOLVES: Ryan Bennett
It’s the kind of free transfer that does not even cause a ripple; former England Under-21 centre-half Ryan Bennett was given a contract by Championship club Wolves after being released by Championship club Norwich. But little more than two years later he is playing Premier League and Europa League football, keeping it simple but effective.

Who remembers when @NorwichCityFC fans laughed at us for signing Ryan Bennett on a free transfer.. Got to be the best free transfer in our clubs history! #wwfc #Norwich #NCFC