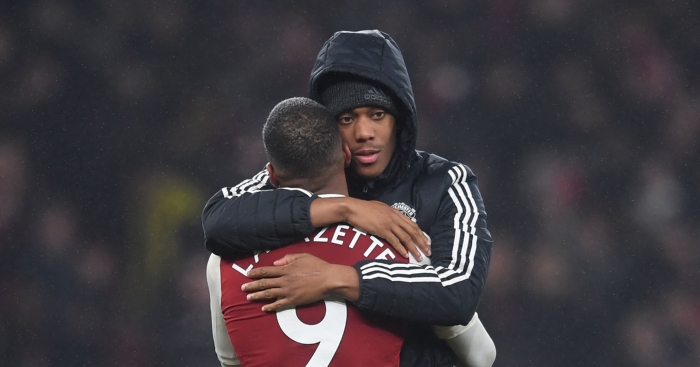 The two rules: the player’s country must have qualified for the World Cup, and the player must not have been ruled out through injury/suspension/dodgy curry.

ARSENAL – Alexandre Lacazette
Hector Bellerin missed out for Spain, but was tarred with the same brush as Arsenal’s haphazard defence this season. He did play more minutes for the Gunners in all competitions than any other player this season. Alexandre Lacazette, on the other hand, scored six more goals than any other player despite missing a chunk of the season through injury.

BOURNEMOUTH – Lewis Cook
With Nathan Ake’s Netherlands not booking their seats to Russia, there is no real standout omission in the Bournemouth squad. Lys Mousset should obviously have made the final cut for France, but Lewis Cook will not be aggrieved at only making England’s standby list.

BRIGHTON – Pascal Gross
Which is not to say that Germany are guilty of Gross negligence when it comes to Brighton’s Pascal. Their extensive and enviable pool of talent makes it difficult for even the very best to stay afloat, and the 26-year-old would barely have had a look in. He did score or assist 15 goals in the Premier League for a bottom-half club – more than Julian Brandt managed (14) for a top-half Bundesliga side. Only one of them made Joachim Low’s 27-man shortlist.

BURNLEY – James Tarkowski
A fine season for club was rewarded with long-awaited honours for country. James Tarkowski will consider this season an unbridled success, even if he has had to withdraw from England’s standby selection.

CARDIFF – Kenneth Zohore
Clearly Denmark feel they can do better than a player with nine goals and five assists for promotion-winning Cardiff. The 24-year-old is yet to even earn his first cap – although he was named in the provisional 35. With Nicklas Bendtner’s participation in doubt, Åge Hareide must be regetting his decision to cut him.

CHELSEA – Cesc Fabregas
The Spanish Chelsea WhatsApp group must have been a pretty awkward place to be when Spain’s World Cup squad was announced. Cesc Fabregas, Marcos Alonso and Alvaro Morata were all overlooked by Julen Lopetegui, while Cesar Azpilicueta eased his way in. It’s difficult not to feel quite sorry for Fabregas…then you look at Spain’s midfield options.

CRYSTAL PALACE – Mamadou Sakho
Neither half of the Premier League’s most underrated central defensive partnership will be at Russia in a playing capacity. James Tomkins never really had much hope of forcing his way into Gareth Southgate’s England plans, but Mamadou Sakho might have fancied his chances for France. His last cap unfortunately came in March 2016; little over a month later, with a home European Championships on the horizon, his drugs ban came into effect.

FULHAM – Ryan Sessegnon
The only difference between Trent Alexander-Arnold and Ryan Sessegnon – both uncapped teenagers – was “regularly playing in the Premier League, in big matches and performing well and have already been in and around our squad,” according to Gareth Southgate. The Fulham winger starred in their regular season and again in the play-offs; it’s only a matter of time until he gets the nod.

HUDDERSFIELD – Christopher Schindler
Sure, Germany have some solid ball-playing centre-halves, and a squad littered with trophies and individual honours. But who is going to do all of the heading, tackling, intercepting and blocking all in one?

LEICESTER – Marc Albrighton
The ship might just have sailed for Marc Albrighton. If England recognition was not forthcoming as Leicester marched to the Premier League title two years ago, he can book his summer holidays safe in the knowledge they shan’t be rudely interrupted. It is still surprising that he’s only 28, mind.

LIVERPOOL – Emre Can
With the Netherlands starving Virgil van Dijk the opportunity to be really tall in Russia, Emre Can might be Liverpool’s most high-profile omission. And within a month or so, he won’t be Liverpool’s at all. Not that they care, considering the midfield they’re building.

MANCHESTER CITY- Aymeric Laporte
In Aymeric Laporte and Eliaquim Mangala, Manchester City have around £100million worth of unchosen French centre-half. The latter never really stood a chance, while the former can console himself with a Premier League winner’s medal. He might be City’s record signing, but he is still uncapped at international level.

(This was done before Germany decided they were utterly batsh*t mental enough to leave Leroy Sane at home.)

MANCHESTER UNITED – Anthony Martial
What Didier Deschamps said of Lacazette and Martial earlier this month: “It is a total analysis regarding what they could have done in certain situations, and in terms of what role they might have had in the squad. I consider Giroud, Griezmann, Fékir and Mbappé as central attackers. Kylian and Antoine can play in other positions.”

What Deschamps forgot to say of Lacazette and Martial earlier this month: “Play more, fellas.”

NEWCASTLE – Kenedy
It would have taken a gargantuan effort from Kenedy to break into Tite’s World Cup plans. As it is, his form helped Newcastle stay up and is likely to have earned himself a decent move this summer, if not a proper first-team opportunity at Chelsea. Not bad.

SOUTHAMPTON – Oriol Romeu
Southampton would have a fine midfield in the right hands, even if none are World Cup-bound. Mario Lemina’s Gabon could not make it, Denmark did but Pierre-Emile Højbjerg was left out, and even the most optimistic of Oriol Romeus would have harboured no hope of cracking Spain’s squad.

WATFORD – Abdoulaye Doucoure
“World Cup? My performances in a good league push me to believe that I have a chance,” said Abdoulaye Doucoure in February. “I know there are very good players. So, there, everything does not depend only on me. I have never been selected, I’m leaving it late.”

Too late, unfortunately. Doucoure was as excellent as one can possibly be for a stuttering Watford team, but this was too high a mountain to climb. He is still only 25; his time will come.

WEST HAM – Arthur Masuaku
Joao Mario, Manuel Lanzini, Edmilson Fernandes, Javier Hernandez and Cheikhou Kouyate will be flying the West Ham flag in Russia this summer. And if you’re being honest, you know Arthur Masuaku should have been there for France instead of Benjamin Mendy.

WOLVES – Ruben Neves
Fernando Santos was pretty clear when insisting “I don’t care about the clubs they play for” after naming his Portugal squad. Indeed, his explanation for leaving out Ruben Neves despite his star turn in Wolves’s promotion season was simple: “Portugal rarely plays with a number six.”