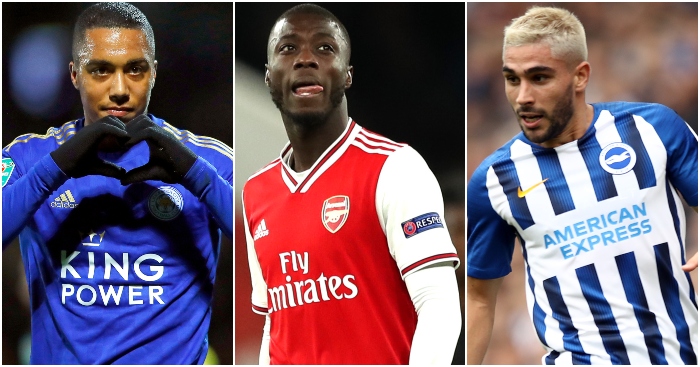 ARSENAL: Nicolas Pepe – £72million (Grade C-)
Aside from two wonderful free-kicks in the Europa League, the former Lille man has offered little. An easy target for the Gunners’ poor form as their record signing, Pepe has been urged to ignore the likes of Roy Keane – who questioned his “fight” – and to forget about the price tag. Would a new manager get more out of him at the Emirates?

ASTON VILLA: Wesley – £22.5million (B-)
The Brazilian looks a decent signing. Villa perhaps would have hoped for a better return than four goals and one assist in the opening 12 Premier League fixtures, but he has consistently proved his worth through his ability to hold the ball up and bring the likes of Jack Grealish and John McGinn into the game.

BOURNEMOUTH: Arnaut Danjuma – £16.2million (C)
A foot injury kept the Dutch international out of the squad for the opening six league games, and he’s started just one game since – against Watford – with his other minutes coming in fleeting substitute appearances. *Shrug*

BRIGHTON: Neal Maupay – £19.8million (B)
His will to chase down defenders, harry opposition players and generally be a pest often overshadows his skill, goalscoring prowess and ability to find space in the box. Can ‘Championship players’ make the step up to the Premier League? Maupay, signed from Brentford – along with the entire Sheffield United team – has proved categorically, that of course they can.

BURNLEY: Jay Rodriguez – £5million (B-)
A homecoming for the Burnley-born goalscorer looked a no-brainer in the summer and still does now. Rodriguez has scored goals wherever he’s been and already has two this season despite starting just three games, including a stunner in their 4-2 loss to Chelsea.

It may only have been a consolation but what a hit it was from Jay Rodriguez! 🚀

Is his strike against Chelsea your goal of the month?

CHELSEA: Christian Pulisic – £57.6million (B+)
Announced himself with a perfect hat-trick against Burnley and has added a further two goals and two assists in the four games since. Managed perfectly as he adapts to a new league under Frank Lampard, Pulisic isn’t Eden Hazard, but he’s pretty damn good.

CRYSTAL PALACE: James McCarthy – £3million (D)
Exciting as the prospect of the James McArthur-James McCarthy axis in the Palace’s midfield was and is, we’ve seen it sporadically. With just one Premier League start, it looks as though the former Everton man has a battle on his hands to displace either Luka Milivojevic or Cheikhou Kouyate and allow the James Mc partnership to blossom.

EVERTON: Alex Iwobi – £27.4million (C-)
The open-mouthed mixture of bemusement and amusement on people’s faces as news broke that Everton had spent so much on a player so widely known to be lacking in end product has turned to knowing looks of I-told-you-so as he has scored one goal and contributed no assists in over 900 minutes of football.

LEICESTER CITY: Youri Tielemans – £40.5million (A)
Has there ever been a more obvious ‘signing of the season’ before a season has actually begun? Great on loan and even better now. If his and Leicester’s superb form continues, he’ll be worth twice that come the summer, and other clubs that turned their nose up at Tielemans will no doubt be come sniffing more forcefully this time around.

LIVERPOOL: Sepp van den Berg – £1.7million (scraped a pass in his 11-plus)
It’s easy to forget that The Reds made no big-money signings this summer, as they continue to stretch their lead over City at the top of the table. The 17-year-old centre-back played 90 minutes against Arsenal in the EFL Cup and they shipped five goals. He’s played all eight reserve team games and they’ve conceded 19 goals. Fair to say the senior centre-backs aren’t under threat for their positions.

MANCHESTER CITY: Rodri – £63million (B)
Kevin De Bruyne described Rodri as “the perfect fit” when he arrived from Atletico Madrid. Rodri tops the charts in City’s midfield for passing accuracy (91.6%), and has played more key passes per 90 minutes than David Silva (1.5). He’s proved his versatility by deputising at centre-back in the win over Crystal Palace – drawing lavish praise from Pep Guardiola – but his future looks set as their midfield metronome.

MANCHESTER UNITED:  Harry Maguire – £78.3million (B+)
Signed to shore up the United defence, and he’s done exactly that. Maguire looked like the future Red Devils captain the moment he walked out on to the pitch – commanding, calm and assured. Could now do with adding goals to his game, just as Aaron Wan-Bissaka – another new signing successfully holding up his end of the defensive bargain – could do with contributing in the final third.

NEWCASTLE: Joelinton – £39.6million (D-)
Wasn’t a goalscorer in Germany, isn’t a goalscorer in England. The scoring feats of those around him however, is a criticism that can be aimed at the Brazilian’s performances. His all-round play is yet to bear the fruits his hefty price tag warrants.

NORWICH CITY: Ralf Fahrmann – £2.7million loan (D)
It’s not often that the fee for a loan signing is nearly four times that of the top permanent summer arrival, particularly for a newly promoted club and especially if that loan signing is nothing more than a back0up goalkeeper, who’s started just one game, in the EFL Cup. Norwich are surely now regretting not loosening the purse strings just a little.

SHEFFIELD UNITED: Oli McBurnie – £17.2million (C-)
With a newly promoted club taking the Premier League by storm, it would be a fair assumption that the all-time club record signing, bought in the summer, would have had a major part to play in that success. But that hasn’t been the case. Just one goal for the former Swansea striker so far has seen him benched, with Lys Mousset and John Lundstrum proving more than capable of providing the firepower in his absence.

SOUTHAMPTON: Danny Ings – £20million (B)
One of the only positives to come from the start of Saints’ season so far, Ings has managed five goals and provided one assist since signing permanently in the summer, meaning he’s been directly involved in over half of their goals so far this season. Their plight is not down to him.

TOTTENHAM: Tanguy Ndombele – £54million (B-)
Far easier to find your feet in a team performing at their best – as Pulisic has found at Stamford Bridge – than in one totally bereft of confidence, like Ndombele’s new side. And so, despite the French international being Spurs’ record signing, the blame for the team’s poor form is currently being aimed mainly at those running down contracts, and Dele Alli. But it won’t be long before recriminations are directed towards Ndombele, should his own performances not improve.

WATFORD: Ismaila Sarr – £27million (D)
The young Senegalese international must be wondering what he’s got himself into. He played just 13 minutes under the manager who signed him in the summer – Javi Gracia – before he was sacked, and has started just one game under new manager Quique Sanchez Flores, used primarily from the bench before injury has kept him from featuring in the last three Premier League games.

WEST HAM: Sebastien Haller – £36million (B)
Four goals and one assist in his opening seven games for the Hammers, but blanks drawn in the last four, as his team’s form has dropped off a cliff. Loves an aerial battle, and has won the most of any Premier League player (6.9 per 90 minutes), but needs the support from those around him that offered so much at the start of the season but have delivered so little lately.

WOLVES: Raul Jimenez – £34.2million (A)
Signed permanently in the summer after a fantastic debut Premier League season on loan, and worth every penny. Eight goals across ten Europa League qualifying and group stage games, as well as five more goals and two assists in the league. His dancing feet to leave Nicolas Otamendi sprawling before setting up Adama Traore to score at the Etihad is one of the abiding memories of the season so far.