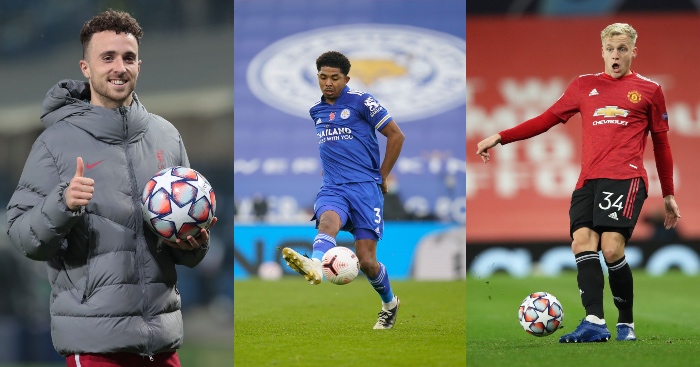 Nothing to write home about in the defeats to Leicester and Aston Villa, but excellent in the 1-0 win over Manchester United: a performance that showed he might be the first half of Mikel Arteta’s unfinished midfield.

This Premier League lark’s easy. A hat-trick against the champions was worthy of a 10/10 WhoScored rating and his six Premier League goals already matches the combined efforts of Villa’s strikers last season.

“I know he puts faith in young players,” 21-year-old Zeqiri said of Graham Potter when he signed. He’s made one match-day squad and is yet to feature.

He’s made the most interceptions (2.7 per 90mins) and the second most tackles (3.5 per 90mins) for Burnley this season. He’s not what they needed, but that’s not his fault.

He gives the ball away in silly areas and we haven’t really seen whether that’s a price worth paying yet. Obviously incredibly talented, but taking more time to settle than his big bucks buddies.

The former QPR winger looked comfortable without setting the Premier League alight before Crystal Palace’s 4-1 victory over Leeds. What Roy Hodgson described as a “faultless performance” featured five tackles, four interceptions and two key passes, to go with an assist and that stunning free-kick. Spot on, Roy.

Everton haven’t won a game since Godfrey arrived at Goodison Park. That’s more coincidental than anything; Richarlison missing three of the four games is far more significant. He deputised well at right-back from the bench against Liverpool, but was less impressive in the same position (not his position) in the 2-0 defeat to Southampton.

Fulham triggered the permanent £10million transfer of Anthony Knockaert after he played over 30 times for them last season. But he went straight out on loan to Nottingham Forest, so we’re not counting him. Reed was also a loan signing turned permanent; he’s been steady.

A nightmare start for the club record signing, as his clumsy challenge resulted in a penalty and a late defeat to Liverpool. He’s scored just one goal in six games but he’s never been prolific anywhere. Linked play especially well in the 3-0 win over Aston Villa last time out, suggesting an upward trajectory.

Brendan Rodgers has described Fofana’s performances as “absolutely colossal”, with Leicester conceding just four goals in the seven games he’s started this season. £32million for the new Virgil van Dijk is a bit of a bargain.

This tackle from Fofana on Jimenez 🤤pic.twitter.com/KYLkmM1fyQ

Seven goals from five starts in all competitions: the expensive back-up is already a bargain starter.

We asked whether United had signed Van de Beek to sit on the bench. We assumed that might be the case as playing him, Paul Pogba and Bruno Fernandes would not be wise. But he’s often sitting on the bench with Pogba. Ole Gunnar Solskjaer has said he needs to be patient, but it’s not entirely clear what he’s waiting for.

Wilson already has six Premier League goals in eight appearances, the same number as last campaign’s top scorer Jonjo Shelvey managed in the entirety of the season. Steve Bruce desperately needed a goalscorer and he’s got a good one.

It’s hard not to feel sorry for Brewster. His first three starts for the Blades have come against Liverpool, Manchester City and Chelsea. He’s had just one shot in those games and only touched the ball nine times in his latest outing at Stamford Bridge. But as is the case for the club as well as him individually, those fixtures won’t define their season. West Ham and West Brom next up offer more hope of goals for Brewster and much-needed points for his team.

21-year-old Diallo was brought in as a direct replacement for Pierre-Emile Hojbjerg, but has so far seen just 18 minutes of action in three short substitute appearances. He’s going to have a hard time displacing Oriol Romeu, who’s in the form of his career alongside James Ward-Prowse for the Premier League high-flyers.

He may be gullible, but he’s not stupid, and he’s pretty bloody good at football. After an early blip on debut against Chelsea he’s consistently shown the attacking intent that’s going to be crucial for a Spurs team lacking a creative midfield spark.

It’s not happened for him in the Premier League after a wonderful season in the Championship. He’s got quality, but maybe the Hawthorns isn’t the place to exhibit it. The London Stadium might have been.

After a successful spell at the end of last season, West Ham signed Soucek permanently in the summer and he’s taken his game to another level. His partnership with Declan Rice in the centre of midfield is arguably one of the best around right now.

Nuno Espirito Santo has said the 18-year-old’s potential is “huge” and you’d bloody well hope so for that price, especially as he looks nowhere near starting a game as things stand. We’ve not seen anything to strengthen or weaken claims that he’s a “generational talent”.