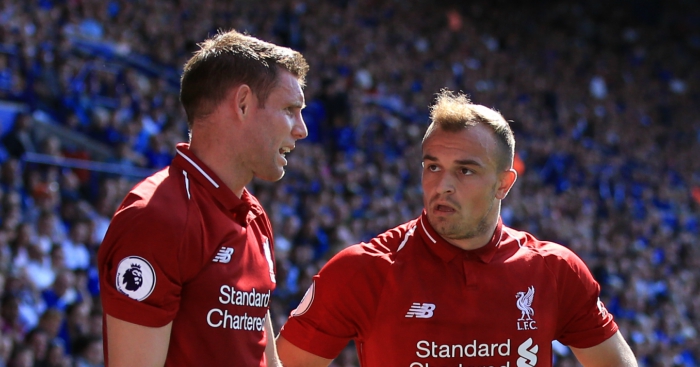 After Xherdan Shaqiri spoke of his desire to bring title-winning “experience” to Liverpool, it got us thinking: who is the most decorated player at each Premier League club?

It turns out that Shaqiri might actually have a point with regards to the difference he can make at Anfield, as he has won twice as many trophies as any of his teammates.

But is that a similar story at every Premier League club? Or are some squads sharing the burden? It’s time to count the first-team trophies of every single player, at both club and international level.

And we mean every trophy. A domestic cup or second-tier title won in Greece is given the same importance as a Champions League trophy. Or those South American championships that we are too stupid to understand. The only trophies discounted are ones won at youth level. So let’s get cracking.

ARSENAL – Petr Cech (18)
If you are still confused as to why Unai Emery continues to start Petr Cech over summer signing Bernd Leno, just look at their respective medal collections. Cech can count four Premier League titles and one Champions League trophy among his haul, while Leno has a solitary Confederations Cup win with Germany to his name. Forget basic skills like kicking, passing, saving and catching and just stare at the shinier silverware like an otherwise lovely magpie.

BOURNEMOUTH – Artur Boruc (9)
For Bournemouth, it really is not even close. Not even a little bit. They have a Europa League winner in Nathan Ake, and a Premier League winner in Asmir Begovic. Plenty of their Championship-winning side also remains. But Artur Boruc is the only one with more than two trophies. Jermain Defoe is ruefully stroking his Community Shield runners-up medal as we speak.

BRIGHTON – Beram Kayal (9)
His last start in a league win came in April 2017, but Biram Kayal can console himself with the fact that he is the envy of the entire Brighton dressing room. Two Israeli Premier League titles and four Scottish Premierships are not to be sniffed at, particularly when he can count former Barcelona and PSV players among his teammates.

BURNLEY – Steven Defour (9)
Not only is Steven Defour quite comfortably the most decorated player in the current Burnley squad, but he is also just two trophies behind Burnley Football Club overall. The midfielder would swap his Belgian and Portuguese top-flight league titles for a shared Charity Shield or Fourth Division win, of course.

CHELSEA – Pedro (25)
Step forward, the Premier League’s most decorated player. It all started with a Tercera Division title with Barcelona B in 2008, with the most recent piece of silverware coming a decade later with Chelsea’s FA Cup win. The bits in between were all much of a muchness, from four Supercopa de Espanas to a World Cup and European Championship. Cesc Fabregas ought to know plenty about those last two.

CRYSTAL PALACE – Cheikhou Kouyate (7)
Spending five years at Anderlecht generally means your trophy collection is enhanced. Cheikhou Kouyate won Belgian league titles in all but one of his seasons with the club, as well as three Belgian Super Cups. Solid effort.

EVERTON – Lucas Digne (12)
“He is accustomed to winning,” noted Marco Silva when signing Lucas Digne from feeder club Barcelona in the summer. “This is his mentality having captured titles in his career and having these on his résumé.” He is not wrong.

FULHAM – Andre Schurrle (5)
Fourteen current Premier League players have won the World Cup. Few have played a bigger part in their respective successes than Andre Schurrle. The Fulham winger netted a crucial goal in Germany’s 2-1 extra-time win against Algeria in the last-16 four years ago, before scoring twice in the semi-final demolition of Brazil, and assisting Mario Gotze’s winner. Not bad.

HUDDERSFIELD – Mathias Jorgensen (10)
Three Danish league and cup doubles place Zanka in a league of his own at Huddersfield. He has won twice as many trophies as his closest challenger – although Erik Durm is the only Terrier with a World Cup winner’s medal.

LEICESTER – Jonny Evans (11)
The shame for Jonny Evans is that he would have been the main attraction had he joined any other Premier League club below the top six. Premier League winner’s medal are not difficult to come by at the King Power Stadium. But who else can lay claim to a Club World Cup?

LIVERPOOL – Xherdan Shaqiri (13)
The inspiration for this list does at least back up his words. There are two things Xherdan Shaqiri can teach his Liverpool teammates: how to exist and thrive as an entirely square man, and how to win trophies.

MANCHESTER CITY – Fernandinho (20)
The departure of Yaya Toure and his 17 trophies leaves Fernandinho with a healthy lead over Claudio Bravo. Pep Guardiola might be eager to point out that individual honours aside, he has won 41 cups and leagues across his playing and managerial careers.

MANCHESTER UNITED – Alexis Sanchez (14)
He might not be able to keep hold of a packet of Doritos, but Alexis Sanchez sure has had plenty of practice at lifting silverware. Perhaps more surprising is that Fred trails only slightly behind after helping Shakhtar Donetsk dominate Ukraine.

NEWCASTLE – Ki Sung-yueng, Fabian Schar, Federico Fernandez (4)
There is literally no wonder whatsoever that Newcastle treat some Premier League games like 90-minute defensive drills. That is an awful lot of players winning a genuinely awful amount of trophies. Rafa claimed one as a player, before adding 13 more as a manager.

TOTTENHAM – Lucas Moura (18)
At one end of the Tottenham scale is Harry Kane, officially the best Premier League player to have ever won f*** all. At the other end are three players Mauricio Pochettino signed recently. There will surely come a time when Kane views the sort of haul Lucas Moura has managed – four Ligue Un titles, a Confederations Cup and a Copa Sudamericana, to name but a few – with a wide-eyed, nagging envy. Going by this season so far, the Brazilian might be the one to help him end the drought.

WATFORD – Heurelho Gomes (9)
One of precious few constants in the ever-changing Watford winds is Heurelho Gomes, whose last honour was the 2009 Confederations Cup with Brazil. As long as he plays five Premier League games by the end of this season, that will soon change…

WEST HAM – Javier Hernandez, Andriy Yarmolenko (7)
West Ham themselves have a slight lead over their two forwards, with the ‘Honours’ page on their official website listing the Intertoto and Football League War Cups among their eight overall successes. They appear to have omitted the 1966 World Cup, mind you. Schoolboy.

WOLVES – Raul Jimenez (10)
The man with the most obvious generic football name in history, Raúl Alonso Jiménez Rodríguez has won a piece of silverware at each of his three clubs, as well as with Mexico. And that is pretty darn neat.