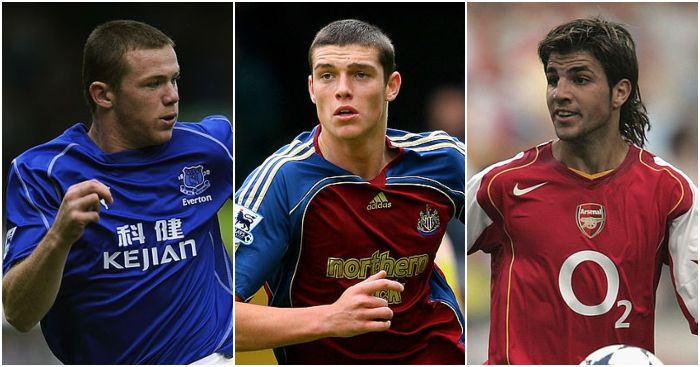 To qualify as an academy graduate, the player must have joined the club at age 16 or younger and played for the youth team before the first team.

ARSENAL – Cesc Fabregas (£35m to Barcelona, 2011)
“Arsenal came for me, but at Barcelona I was just one of many,” said Cesc Fabregas shortly after breaking into the Arsenal first team in 2004. He had joined the club a year before as a 16-year-old with a dream, a glorious touch and a mullet to die for, returning to Barca in 2011 as a fully-fledged star. And it should never be forgotten that he only settled in north London so quickly thanks to living with the Spanish-speaking Philippe Senderos.

ASTON VILLA – Gareth Barry (12m to Manchester City, 2009)
The £1.25m Aston Villa paid to sign a 16-year-old Gareth Barry from Brighton in 1996 turned out to be one of the most astute pieces of business in the club’s entire history. By the time he left over two decades later, the midfielder was Villa’s record Premier League appearance holder and sixth-highest scorer in the competition. He had earned his solitary winner’s medal when it finally arrived in 2012.

BOURNEMOUTH – Danny Ings (£1m to Burnley, 2011)
Not particularly known for their prowess in terms of sales, Bournemouth have only ever received £10m or more for two players: Benik Afobe and Matt Ritchie. Adam Lallana is perhaps their best homegrown product, but left for Southampton aged 12 in a deal worth just £18,000. The Cherries received a little more than that when fellow future Liverpool legend Danny Ings left after just 30 first-team appearances.

BRIGHTON – Adam Virgo (£1.5m to Celtic, 2005)
With his 120th-minute goal in the second leg of the 2004 Division Two play-off semi-final, Adam Virgo kept Brighton’s promotion hopes alive. They beat Swindon in the subsequent penalty shootout and overcame Bristol City in the final, reaching the Championship in its inaugural season. The centre-half was their top scorer with eight goals as the Seagulls survived the drop; they went down the following season, long after Virgo had left for Celtic.

BURNLEY – Jay Rodriguez (£7m to Southampton, 2012)
As the only one of seven teenagers to be offered professional terms following an apprenticeship with Burnley in 2007, Jay Rodriguez had a considerable pile of expectation placed upon his shoulders. The forward rose to the challenge, playing a part in their Championship promotion campaign in 2008/09, then being named their Player of the Year in 2010/11. Injury meant he did not feature in the Premier League in between, but that chance finally came when Southampton made him their first signing upon promotion in 2012.

CHELSEA – Nathan Ake (£20m to Bournemouth, 2017)
“It’s driving me crazy that hot prospects are walking away from us like this,” was Leo Beenhakker’s reaction to the news that Chelsea had agreed a £230,000 fee with Feyenoord over the transfer of 15-year-old Nathan Ake. It probably didn’t improve his mood when the centre-half was sold five years later for £20m, having made just 17 first-team appearances for the Blues.

CRYSTAL PALACE – Wilfried Zaha (£10m to Manchester United, 2013)
Aaron Wan-Bissaka will surely soon replace him, thereby becoming the most expensive homegrown product in Premier League history. But there was a time when it seemed Wilfried Zaha would beat his own record. The winger seems to have been priced out of a move by Crystal Palace, who made a profit of £4m in signing Zaha back in 2015 two years after he was sold.

EVERTON – Wayne Rooney (£27m to Manchester United, 2004)
‘ONCE A BLUE, ALWAY’S A BLUE’ was the message emblazoned on the t-shirt a 16-year-old Wayne Rooney revealed after scoring in the 2002 FA Youth Cup final, complete with questionable apostrophe. He had joined Everton six years earlier, playing 67 Premier League games before Manchester United made him the most expensive teenager ever.

LEICESTER – Emile Heskey (£11m to Liverpool, 2000)
Stan Collymore’s reign as Liverpool’s record signing lasted just five years. By quirk of fate, the man who replaced him was a Leicester teammate at the time: 22-year-old Emile Heskey. Doubts were expressed over his goalscoring prowess even then – 46 goals in 197 games for the Foxes only invited questions – but no price could be put on his and Michael Owen’s beautiful relationship.

LIVERPOOL – Raheem Sterling (£49m to Manchester City, 2015)
QPR had reportedly considered handing him his first Football League start at the age of 14, but by 15 Raheem Sterling was headed to Liverpool for a guaranteed £600,000 and £5m worth of clauses which were surely met by the time he left for Manchester City in 2015.

MANCHESTER CITY – Brahim Diaz (£15.5m to Real Madrid, 2019)
It was reported in December 2013 that Manchester City had won the race to sign a player rather unimaginatively described as ‘the new Messi’. At an initial cost of £300,000 rising to £2.4m, City stand to receive up to ten times that if Brahim Diaz is a success at Real Madrid; he started five games in all competitions after joining in January.

MANCHESTER UNITED – David Beckham (£24.5m to Real Madrid, 2003)
After slipping through the nets at Leyton Orient, Norwich and Tottenham, David Beckham signed schoolboy forms at Manchester United on his 14th birthday. He remains the penultimate Old Trafford player to finish in the top three of a Ballon d’Or vote, winning six Premier Leagues, two FA Cups, one Champions League, lobbing one Neil Sullivan and having one football boot kicked at his head before he left in 2003. He remains the last Englishman to play for Real Madrid, a full 12 years after his last appearance.

NEWCASTLE – Andy Carroll (£35m to Liverpool, 2011)
Newcastle’s biggest homegrown sale ever is also their outright biggest sale and still utterly hilarious. Andy Carroll signed his first professional contract with the club in 2006, combined the genuinely real Wor Jackie Milburn Trophy with a pre-season goal against and subsequent public praise from Gianluigi Buffon in 2007, started one Premier League game in all of 2008, scored his first top-flight goal in 2009 and was the club’s top scorer upon promotion in 2010. By January 2011 he had scored 34 career goals and was sold for £35m, becoming the eighth most expensive player in world football.

NORWICH – Jacob Murphy (£12m to Newcastle, 2017)
Narrowly edging out Cardiff-contracted twin brother Josh by just £1m is Jacob Murphy, who had six separate loan spells and just one season in the Norwich first team before joining boyhood club Newcastle when they came up from the Championship in 2017.

SHEFFIELD UNITED – David Brooks (£11.5m to Bournemouth, 2018)
Manchester City deserve plenty of credit for the emergence of their bitter rivals’ newest transfer target, having honed the talents of David Brooks for almost a decade from when he joined aged seven. The Welshman’s decision to leave for Sheffield United’s academy in 2014 proved wise, as he made his way to the Premier League within four years.

SOUTHAMPTON – Luke Shaw (£27m to Manchester United, 2014)
A Southampton academy member since he was eight, Luke Shaw was attracting Premier League interest as early as January 2012. He was yet to even make his first-team debut for the then-Championship club, who placed a £4m valuation atop his 16-year-old head. Shaw left for £27m less than three years later.

TOTTENHAM – Andros Townsend (£12m to Newcastle, 2016)
Harry Kane could wait until he wins his first trophy for Tottenham – the revived 2030 Intertoto Cup – to leave, and the 36-year-old would still stand every chance of eclipsing Andros Townsend as their most expensive academy graduate. Nine different loan spells in seven years at White Hart Lane would make even Lucas Piazon blush.

WATFORD – Ashley Young (£9.6m to Aston Villa, 2007)
The exciting, explosive and genuinely excellent winger who joined Watford at 10, stayed on part-time after being told he wouldn’t receive a full scholarship and should look for another team at 16, and made his first-team debut at 18 resembles nothing of his Vicarage Road days now. Ashley Young joined his boyhood club a full year before Euro 96. He’s quite old.

WEST HAM – Rio Ferdinand (£18m to Leeds, 2000)
Until and unless West Ham cash in on Declan Rice, Rio Ferdinand will retain this title. Harry Redknapp insisted in 2015 that he “wanted to keep him” but was strong-armed into selling the centre-half at the turn of the century by chairman Terry Brown, who feared the Bosman ruling meant “there will never be a big transfer” again. Leeds sold him to Manchester United for £30m less than two years later.

WOLVES – Robbie Keane (£6m to Coventry, 1999)
The only current Premier League side whose record homegrown sale occurred in the 20th century is Wolves, who must be awfully embarrassed by that very fact. Joleon Lescott came close when he joined Everton in a £5m deal in 2006, but boyhood fan Robbie Keane’s move to boyhood club Coventry, shortly before transfers to boyhood club Leeds, boyhood club Inter and boyhood club Tottenham, take the crown.