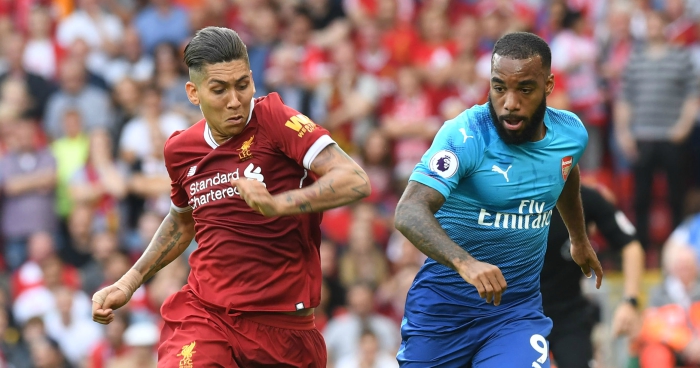 The inverse to November’s ‘The usual substitutes’ feature, here are those who start plenty but are always hauled off.

ARSENAL – Alexandre Lacazette (19 starts, subbed off 15 times)
It is a trope so often repeated by Arsene Wenger that he was directly asked about it in November. At any point from the 60th to the 80th minute of a match, the Frenchman will look to his bench and call on a substitute to replace Alexandre Lacazette. It was Danny Welbeck against Chelsea on Wednesday as Lacazette failed to even produce his usual big-game party trick. No player has been substituted on more occasions in the Premier League this season.

BOURNEMOUTH – Jermain Defoe (9 starts, subbed off 8 times)
A storied career was brought full circle in the summer when Jermain Defoe returned to Bournemouth after doing some goals for relegated Sunderland. It was described as a ‘free transfer’, but a signing-on fee and wage package amounting to £20million was enough to persuade the England international to the south coast again. Three goals in 17 games – and completing 90 minutes just once in the Premier League – has been the rather underwhelming return.

BRIGHTON – Pascal Gross (20 starts, subbed off 13 times)
Fans of microeconomics will be absolutely delighted to learn of Brighton’s Gross substitutes. The 26-year-old has created more than twice as many chances as his nearest teammate, and is surely the bargain of the summer, but Chris Hughton deserves credit for preserving his fitness.

BURNLEY – Jeff Hendrick (19 starts, subbed off 12 times)
Two Burnley players have been substituted in 12 of their 22 Premier League games thus far, but Jeff Hendrick gets the nod over Steven Defour by virtue of starting fewer games. Burnley’s one-time record signing, and one-third of the most weirdly effective central midfield in recent memory, has been substituted in 63% of his games this season.

60' Substitution for Burnley – Jeff Hendrick is replaced by Ashley Barnes. 1-0

CHELSEA – Pedro (11 starts, subbed off 9 times)
“I had different expectations when I first came here,” said Pedro of a potential role on the bench for Spain at Euro 2016. “It is difficult for me to play [as a substitute], and if there is no continuity it is not worth me turning up just to be part of the group.”

CRYSTAL PALACE – Yohan Cabaye (18 starts, subbed off 11 times)
Yohan Cabaye completed 90 minutes seven times in Crystal Palace’s first 13 Premier League games of the season; they won twice. He has not completed 90 minutes in the nine games since; Palace have lost once. Luka Milivojevic comes from Serbia and will f***in’ murder ya, but Cabaye comes from France and is often a victim of circumstance.

EVERTON – Wayne Rooney (16 starts, subbed off 13 times)
Sam Allardyce isn’t about to tell Wayne Rooney where to play, but he is willing to ask him nicely to vacate the pitch when those weary legs grow tired deep into the second half. The 32-year-old completed 90 minutes in five of Ronald Koeman’s nine games, but has not seen out a Premier League game he has started under David Unsworth or Big Sam.

Tom Davies and Aaron Lennon are in joint-second place on this list, both having been substituted seven times.

HUDDERSFIELD – Elias Kachunga (16 starts, subbed off 10 times)
After being substituted in both legs of the Championship play-off semi-final, as well as in the latter stages of the final, Elias Kachunga should probably have taken the hint. The injured winger is regularly the first second-half sacrifice made by David Wagner, but his importance to the Huddersfield cause should not be understated: they have not won in four games without him, and only six teammates have played more minutes.

LEICESTER – Riyad Mahrez (21 starts, subbed off 10 times)
Work is still to be done to surgically remove the crown from Shinji Okazaki’s skull, but Riyad Mahrez is preparing to wash his hands and ask for the scalpel. Okazaki (20) and Marc Albrighton (17) were both substituted more often than Mahrez (15) last season, but the Algerian – who is immune to headsgoneitis – leads the pack this campaign.

MANCHESTER CITY – Gabriel Jesus (12 starts, subbed off 11 times)
It felt at one stage as though Manchester City were capable of moving on without Sergio Aguero, that Gabriel Jesus was Pep Guardiola’s choice for both future and present, consigning his South American cousin to a legendary past. But even before Jesus’ recent injury, this was a healthy battle Aguero was winning in terms of starts, minutes, goals and assists. For now, apprentice is not yet master.

MANCHESTER UNITED – Henrikh Mkhitaryan (11 starts, subbed off 11 times)
There might never be a more simple and accurate depiction of Jose Mourinho’s thoughts towards Henrikh Mkhitaryan. The Armenian has started 11 Premier League matches this season, but is yet to complete a full game. Even during his assist-laden opening games, Mourinho hauled the 28-year-old off before full-time, presumably for not tracking back into his own penalty area when 4-0 up in the 89th minute.

As an aside, Juan Mata has also been substituted 11 times, but has made 15 starts. United’s next most-substituted players? Anthony Martial (10), Marcus Rashford (10) and Jesse Lingard (7). The message is fairly clear.

Double Man Utd sub on 61 minutes: Fellaini and Martial on for Mkhitaryan and Jones. #CHEMUN

NEWCASTLE – Joselu (17 starts, subbed off 14 times)
For Joselu, consistency is key: the Spaniard scored four goals in 22 appearances for Stoke in his only other Premier League season, and has scored three goals 19 games this season. But he started just ten games and was a substitute in 12 in 2015/16; he has started 17 games this campaign.

SOUTHAMPTON – Dusan Tadic (18 starts, subbed off 13 times)
Most recently guilty of getting in the way of an innocent Ashley Young’s Marouane Fellaini ‘flailing elbow’ tribute, Dusan Tadic has had something of a season to forget at Southampton. Three goals and two assists is a fair return for a team that has scored 21 league goals in all, yet Tadic has been substituted at least six times more than any of his teammates.

STOKE – Xherdan Shaqiri (20 starts, subbed off 9 times)
The one-man entertainment show appears to have been postponed in recent weeks, with even Xherdan Shaqiri incapable of coaxing Stoke from their slump. The Swiss has been substituted off in almost half of the time he has started, and if you ask Mark Hughes, the media, the government and Storm Eleanor are to blame.

SWANSEA – Tom Carroll (20 starts, subbed off 7 times)
With Andy only being substituted three times at West Ham, the onus has fallen on Tom this season. The midfielder has risen to the challenge, being substituted on seven separate occasions. He has been replaced by five different players, ranging from a straight swap with Sam Clucas, to system-altering changes including Wayne Routledge, Luciano Narsingh, Oliver McBurnie and Tammy Abraham.

Off comes Tom Carroll to ironic cheers (replaced by Luciano Narsingh). Not nice, but he hasn't been good at all.

TOTTENHAM – Heung-min Son (14 starts, subbed off 11 times)
Well it was never going to be Harry Kane or Dele Alli. Mauricio Pochettino has cultivated a fine reputation as both a manager and a coach since his much-maligned arrival on these shores, but chinks do remain in the armour. And sitting snugly between a lack of trophies and his weakness for dairy products is his substitution record. It is now 88 in all competitions, with a return of one goal and one assist.

WATFORD – Andre Gray (12 starts, subbed off 8 times)
The tide of public Watford opinion appears to have turned against Andre Gray. Three goals and two assists in 21 games for the club’s record signing is likely to do just that. His late strike against Manchester City was his first goal in eight games. It has not gone well.

WEST BROM – Jay Rodriguez (18 starts, subbed off 8 times)
It turns out that West Brom do not like substituting their players. Jay Rodriguez leads the way, having been subbed off eight times, and he is followed by Matty Phillips (7), Hal Robson-Kanu (6), Sam Field and Grzegorz Krychowiak (both 5). That’s the Pard knock life for you.

WEST HAM – Marko Arnautovic (14 starts, subbed off 8 times)
Before realising that he is actually one of the greatest players in the world playing under one of the most accomplished managers in history, Marko Arnautovic struggled a little at West Ham. He completed 90 minutes once in his first 12 appearances, scoring one goal. He has completed 90 minutes four times in his next five games, scoring four goals and assisting another.