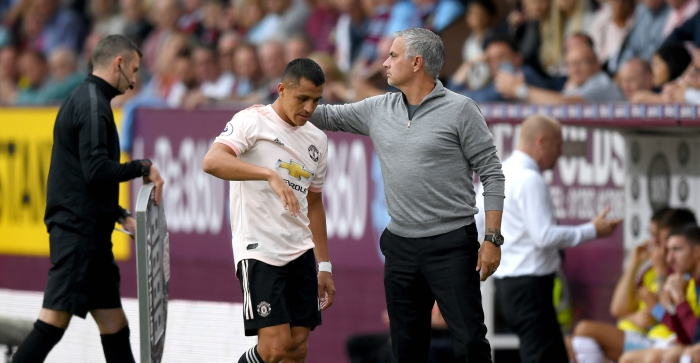 ARSENAL – Pierre-Emerick Aubameyang (7 starts, subbed off 5 times)
Alexandre Lacazette saw himself hauled off 16 times in the Premier League last season – more than every other Arsenal player except for Alex Iwobi (17). This campaign, “brother” Pierre-Emerick Aubameyang has made that long and disappointed walk towards the bench more often than any of his teammates. Unai Emery kept him on against both Manchester City and Chelsea, but saw fit to substitute him against West Ham, Cardiff, Newcastle, Everton and Watford. Aubameyang then scored as many goals in 28 second-half minutes against Fulham as in those seven starts combined. He has not completed the full 90 minutes of a league win since the penultimate game of 2017/18, the poor fella. He contributes to Arsenal’s thumbing of the nose towards xG, mind.

BOURNEMOUTH – David Brooks (7 starts, subbed off 6 times)
Spare a thought for David Brooks, who watched Burnley put four past Bournemouth in the only game he has started and finished this season. The 21-year-old has otherwise been Eddie Howe’s first substitute on five of his six starts. At least he managed to open the scoring against both Crystal Palace and Watford before being taken off after 58 and 70 minutes respectively.

You might say that when the fourth official holds up the substitute board, Brooks eyed it each time. And I might apologise for that.

BRIGHTON – Solly March (8 starts, subbed off 6 times)
As we head into another international break in October, March may argue that he has already had plenty enough rest. The 24-year-old is one of seven ever-presents for Brighton this season, but Chris Hughton has substituted him in all but two of his eight appearances. In fact, March has been substituted twice as often as any other Brighton player.

Perhaps he ought to ask his manager to change tack. The Seagulls are unbeaten when March has completed the full 90 minutes this season, beating Manchester United – where he got an assist – and drawing with Fulham.

BURNLEY – Chris Wood (4 starts, subbed off 4 times)
When it came to deciding our top ten disappointments of this nascent Premier League season, Chris Wood was fortunate not to make the cut. The New Zealand international scored ten goals in 20 starts for Burnley last campaign, the only Claret to breach double figures on their journey to seventh place. Yet Wood has failed to burn quite as bright this time around, starting the first four league games before being substituted in each. He has come off the bench in the subsequent four matches, but has barely made an impact.

CARDIFF – Danny Ward (3 starts, subbed off 4 times)
You really have read that correctly. Danny Ward started against Arsenal, Chelsea and Manchester City, and was substituted after 84, 77 and 63 minutes respectively. His other four appearances have been as a substitute, the most recent of which saw him come on in the 78th minute and leave injured in the 85th. He is faring no better in his part-time job as Leicester’s back-up goalkeeper.

Sub Danny Ward is injured and leaves the field. Bobby Reid comes on for last five mins (plus added time)

CHELSEA – Mateo Kovacic (5 starts, subbed off 5 times)
Maurizio Sarri has also substituted Willian five times in the Premier League this season, but the Brazilian has at least managed to finish one of his six starts for Chelsea. Mateo Kovacic has not been granted that same courtesy, being replaced by Ross Barkley four times, and Ruben Loftus-Cheek once. The 24-year-old only completed the full 90 minutes in four La Liga games for Real Madrid last season, too. He must be eager to beat the traffic.

CRYSTAL PALACE – Jordan Ayew/Jeffrey Schlupp (5 starts, subbed off 4 times)
If you would like to impress your one remaining friend who has not abandoned you because you keep quoting random football statistics at them, then this one is a doozy: Wolves (6) are the only side to have substituted fewer different players than Crystal Palace this season (8, level with Watford). Roy Hodgson has taken Patrick van Aanholt, Max Meyer and Cheikhou Kouyate off once apiece, James McArthur twice, and Christian Benteke thrice. Andros Townsend has come off four times, but the fact he has at least started all eight games ranks him higher than poor Jordan Ayew and Jeffrey Schlupp.

EVERTON – Theo Walcott (8 starts, subbed off 5 times)
And it is now time to alienate that one remaining friend, because this might be a step too far. Since the start of the 2006/07 season, no player has been substituted as many times in the Premier League as Theo Walcott (113, level with David Silva). Marco Silva has taken the 29-year-old off five times so far this campaign.

FULHAM – Luciano Vietto (6 starts, subbed off 4 times)
What is going wrong at Fulham? Nothing with regards to summer signing Luciano Vietto. No player has more Premier League assists, and of the sextet with four each, only Benjamin Mendy (450) and Olivier Giroud (358) have fewer minutes than the Argentine’s 489.

HUDDERSFIELD – Alex Pritchard (4 starts, subbed off 3 times)
Here’s a fact: Huddersfield have not lost a single Premier League game in which Alex Pritchard has completed the full 90 minutes this season. True, a sample of literally one match – the 1-1 draw with Burnley – might point to that being a mere coincidence. But might it also be the key to their unlikely survival? Almost definitely.

LEICESTER – James Maddison (8 starts, subbed off 7 times)
Leicester need no lessons in making substitutions. The three Premier League players most regularly brought off in the 2015/16 season were all Foxes, with Shinji Okazaki (25 times), Riyad Mahrez (24) and Marc Albrighton (22) all able to save their energy for some end-of-campaign title-lifting. Claude Puel might not have such high ambitions, but James Maddison is a similar sort of attacking, skilful player whose flair fades ever so slightly as games wear on. Demarai Gray (4) and Kelechi Iheanacho (3) are next, so you get the point.

LIVERPOOL – Roberto Firmino (8 starts, subbed off 4 times)
Jurgen Klopp substituted Roberto Firmino more times (20) than any other player last season, and has continued where he left off this campaign. Firmino has been replaced twice by Daniel Sturridge, and twice by Jordan Henderson – presumably not directly in the latter case.

Perhaps notable is that Trent Alexander-Arnold has been substituted three times. Sure you’re not knackered, fella?

MANCHESTER CITY – Sergio Aguero (8 starts, subbed off 6 times)
The most substituted player (20 times) in the 2011/12 season alongside such luminaries as Matthew Etherington, David N’Gog and Rafael van der Vaart, Sergio Aguero admitted this summer that he “suffered” throughout his first year in England. “There was a match we played in the snow. It was horrible playing in the snow,” he said. “There was ice on my face. I almost asked to be subbed off.”

Seven years on, he has acclimatised pretty well to the ropey weather, but is still having his relentless quest for goals rudely interrupted by his manager.

MANCHESTER UNITED – Jesse Lingard/Alexis Sanchez (4 starts, subbed off 3 times)
Three Manchester United players have been substituted three times in the Premier League this season. Paul Pogba is on that list, but has at least started all eight games. The same cannot be said for Jesse Lingard or Alexis Sanchez. The former was substituted more often than anyone by Jose Mourinho last season, and more than everyone bar Juan Mata in the manager’s first campaign in charge. The latter was described as “nearly impossible” to ever take off by Arsene Wenger in August 2016; Mourinho certainly seems to have found a way.

NEWCASTLE – Ayoze Perez/Matt Ritchie (7 starts, subbed off 5 times)
Rafael Benitez must know by now that substituting Ayoze Perez gives him far less grief than bringing off Matt Ritchie. “They want to win,” said the Newcastle manager when asked about fans booing his decision to replace Ritchie with Jacob Murphy against Leicester last month. “We want to win. We can have different opinions on what we do in the moment.”

That was nothing compared to Ritchie’s Gordon Ramsey-inspired outburst after being hauled off on the hour mark as usual against Tottenham on the opening day, mind.

SOUTHAMPTON – Mohamed Elyounoussi/Shane Long (4 starts, subbed off 4 times)
Spare a thought for Shane Long, who has completed 90 minutes of a Premier League match once since January. Mohamed Elyounoussi will hope to fare a little better if and when he eventually settles at Southampton, but the £16m summer signing has some work to do to convince Mark Hughes.

TOTTENHAM – Heung-min Son (3 starts, subbed off 3 times)
“Until he brings me the present after letting him go win the Asian Games it’s karma that he doesn’t score!” said Mauricio Pochettino, who has clearly recognised the patchy form of Heung-min Son since returning from international duty with South Korea. Eric Dier and Mousa Dembele have both been substituted three times apiece, but have made seven and five starts respectively. Son cannot say the same, unless he is a bare-faced liar.

WATFORD – Andre Gray (8 starts, subbed off 7 times)
No Watford player found themselves substituted more times than Andre Gray last season. The 27-year-old started 16 games and was taken off in 12 of them, and has followed a similar pattern in 2018/19. Javi Gracia has seen fit not to bring Gray off just once this season, and the manager was rewarded with a late goal in the defeat to Manchester United. We admire Watford’s commitment to Isaac Success’s quest to come off the bench in every single game.

WEST HAM – Mark Noble (6 starts, subbed off 4 times)
The two West Ham players who have been substituted most often this season share precious little in common besides their forenames. Marko Arnautovic (subbed 4 times in 7 starts) is the goalscoring virtuoso, the lynchpin of a wonderful attack. But the Hammers captain is the less extravagant leader of a functional midfield. He still finds himself taken off more often than not, as Manuel Pellegrini has made his Noble intentions pretty clear.

WOLVES – Helder Costa (8 starts, subbed off 8 times)
Have you ever seen Helder Costa and Isaac Success in one place at the same time? Of course not: the former is always leaving just as the latter arrives. How very convenient.