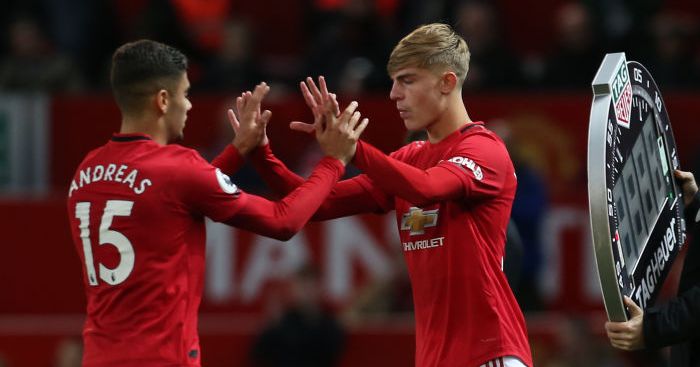 Dani Ceballos (7 starts, subbed off 5 times)
Perhaps the penny has finally dropped for Unai Emery. There is still a fountain-full yet to fish out but the manager is at least starting to use Dani Ceballos instead of ignoring him. Having been either substituted or a substitute in each of his previous nine Premier League games, Ceballos has been given the honour of completing a full 90 minutes in both of the last two. That the Gunners subsequently squandered leads against Crystal Palace and Wolves hardly weighs in his favour, nor does a record of one shot and two chances created from those games. While seven teammates have started more Premier League games than Ceballos this season, no-one else has been substituted more than three times.

Wesley Moraes (11 starts, subbed off 6 times)
Aston Villa were beating Liverpool 1-0 when Wesley Moraes made way for Jonathan Kodjia in the 86th minute on Saturday. They conceded an equaliser a minute later, and a winner not long after that. Each of the striker’s four goals and one assist have come in games that he has played a full 90 minutes in. Dean Smith is a stupid head for ever bringing him off.

Harry Wilson (8 starts, subbed off 7 times)
Jurgen Klopp must be at last faintly satisfied with Bournemouth’s use of Harry Wilson so far this season. While other loanees are signed simply to fill a place on the bench, put out the cones in training and show fans that investment in the playing squad is being made, Wilson has been a genuine asset to Eddie Howe. Three Premier League goals for the campaign puts him at least level with every Liverpool player bar Sadio Mane and Mo Salah, even if he is becoming accustomed to seeing the fourth official hold his number up.

Neal Maupay (9 starts, subbed off 6 times)
Brighton’s record in the three Premier League games in which Neal Maupay has started and not been substituted reads: P3 W3 D0 L0 F8 A2. The Frenchman has netted two of those goals himself, in victories over Tottenham and Everton, yet should perhaps still be even more prolific. It’s not as if he had one shot on target from seven efforts against Norwich.

Ashley Barnes (10 starts, subbed off 7 times)
Four goals in his opening three games feels like a lifetime ago for a man so often lumped in with the lumps. It should be noted that in only one of those matches – a 2-1 defeat to Arsenal – did Ashley Barnes play 90 minutes. Sean Dyche has only permitted the forward to repeat that feat twice more, in September’s draw with Brighton and last weekend’s Sheffield United humbling. He last started and finished a Premier League win for Burnley against Cardiff in April, and suffered the ignominy of being replaced by Matej Vydra against Chelsea last month.

Tammy Abraham (10 starts, subbed off 9 times)
Only once, in the 1-0 victory over Newcastle, has Frank Lampard allowed Tammy Abraham to play an hour and a half of uninterrupted Premier League football. The 22-year-old has played two full Champions League games of three but clearly cannot be trusted once the clock passes 84 minutes or so in domestic competition. So much for the manager’s unwaivering faith in youth, eh?

Abraham has been substituted at least twice as often as any teammate, with Ross Barkley hauled off in four of his five starts – but crucially only twice for Mateo Kovacic.

Jordan Ayew (10 starts, subbed off 9 times)
So committed is Roy Hodgson to the trope of not allowing Jordan Ayew to finish a full game that he has substituted him in second-half stoppage time twice. Crystal Palace could afford to, of course: they were winning both games and such time-wasting methods enabled them to see out the victories. Only against Manchester City did Hodgson start Ayew and not bother to bring him off in a 2-0 defeat.

“We obviously were thinking at 0-0, ‘right, we might need to replace him here,'” Hodgson said after the 1-0 win over Aston Villa in August, with Ayew scoring in the 73rd minute and being taken off in the 86th. “‘Give Christian Benteke 10 minutes with fresh legs.’ We still made the change. We just didn’t do it immediately after he scored because that would be a foolish thing to do tactically – when someone scores a goal and your next move is to take him off. I don’t think the fans would have been too pleased about that.”

Theo Walcott (4 starts, subbed off 4 times)
Dominic Calvert-Lewin, Alex Iwobi and Gylfi Sigurdsson all share the mantle of Everton’s most substituted player of the season, but Theo Walcott matches their four games and raises them a total of 300 Premier League minutes, meaning he has been taken off in each of his starts after an average of 75 minutes. His early substitution due to a head injury in the defeat to Manchester City does obscure his numbers somewhat but the point stands that he has played 90 minutes of a single Premier League game just once in 2019 – on the final day of last season.

Ayoze Perez (8 starts, subbed off 8 times)
The record for most Premier League starts this season while being substituted in every one does…not go to Ayoze Perez. But he is damn close. Brendan Rodgers has taken him off after 76, 80, 78, 67, 84, 67, 74 and 74 minutes, with the Spaniard not starting the 3-1 Bournemouth win or either of Leicester’s two defeats this campaign. Rodgers presumably just forgot to take him off in August’s League Cup second-round penalty shootout win over former club Newcastle. And who can blame him?

Roberto Firmino (10 starts, subbed off 6 times)
Georginio Wijnaldum has been substituted as often as Roberto Firmino in the Premier League this season, but has started one more game than the Brazilian. Thus Roy Keane’s best mate takes the title at Liverpool, being hauled off against Norwich, Arsenal, Burnley, Sheffield United, Leicester and Tottenham. “Bobby is probably ready, but it’s not about being ready – it’s a bigger picture and we have to think about that,” Jurgen Klopp said ahead of the only Premier or Champions League match Firmino has not started – the 3-1 Newcastle win in which he proved himself to be pretty much ready.

David Silva (9 starts, subbed off 6 times)
As the most subbed-off Premier League player for any side since the organisation started keeping such statistics, it should perhaps come as no surprise that David Silva leads the way for Manchester City this season. And it will be even less shocking to learn that Pep Guardiola’s side have won 15 of the 16 games – scoring 44 goals and conceding seven – in which Merlin has weaved his magic for a complete 90 minutes in 2019.

That outlier? A 2-1 defeat to bloody Newcastle in January. Madness.

Andreas Pereira (9 starts, subbed off 6 times)
Of the numerous embarrassing aspects of Manchester United’s failure of a season, Andreas Pereira starting enough Premier League games to be substituted a dozen times is among the most stark. He just isn’t very good.

Joelinton (11 starts, subbed off 7 times)
Holding up the ball for 20 minutes at a time as you wait for a semblance of attacking support sure is tiring work. Joelinton is one of three outfielders to have started every Premier League game for Newcastle under Steve Bruce, lasting the entire length just four times, and not at all since September 21. It speaks volumes that the only players to have been substituted more than twice by the Magpies this season are Joelinton, Miguel Almiron and Allan Saint-Maximin (5). Defenders don’t need rest.

Marco Stiepermann (9 starts, subbed off 9 times)
Ayoze Perez: meet your nemesis. Marco Stiepermann has started nine games for Norwich this season and been substituted in every single one, ranging from his 89th-minute removal against Manchester City in September to his 58th-minute sacrifice to the Norfolk gods at Liverpool in August. At this stage, we are genuinely excited to see whether this lasts the whole season. Make it so, Daniel Farke.

David McGoldrick (7 starts, subbed off 6 times)
Here’s to you, Callum Robinson, Wilder subs you more than you will know. As often as David McGoldrick, in fact, but the latter has started seven games to Robinson’s eight. This is presumably as prestigious a distinction as having fewer shots than Scott McTominay this season despite being an actual striker. Mind you, only one of those is playing regularly for a team with Champions League aspirations.

Danny Ings (8 starts, subbed off 7 times)
Thrown in amongst the usual tactical changes in the closing ten minutes is one aberration. Danny Ings might point out that his half-time removal, along with Jannik Vestergaard, in the 9-0 defeat to Leicester hardly turned the tide. He should be used to it, of course: no Southampton player was substituted more often last season either.

Harry Winks (9 starts, subbed off 6 times)
Mauricio Pochettino has to stop letting Harry Winks finish games he starts. Tottenham have beaten only Southampton when the midfielder has played a full 90 minutes, otherwise losing to Newcastle and Leicester and drawing with Olympiacos and Arsenal. It is towards the end of a list the manager ought to consider, one which includes going on a team-building trip and accidentally losing Serge Aurier, or changing his back-up goalkeeper’s name by deed poll to Paul O’Gazzaniga and convincing everyone he is homegrown. But he should at least think about giving his 23-year-old midfielder forty Winks for every one start more often.

Will Hughes (6 starts, subbed off 5 times)
Gerard Deulofeu has seen his number come up as often as Will Hughes, but has eight Premier League starts to his teammate’s six. The one league game that Hughes has played a full 90 minutes in this season? The 3-0 defeat to Brighton on the opening day. Oh dear.

Felipe Anderson (10 starts, subbed off 7 times)
“I chose to take off Felipe Anderson at half-time but if I’d been able to change 11 at that moment, I might have done,” said Manuel Pellegrini after watching West Ham limp to a 2-0 defeat at Everton last month. He might have, but he didn’t, and the manager simply fell back on his habit of taking Anderson off to a raft of frustrated groans. The Brazilian has made way for Javier Hernandez, Pablo Fornals (twice), Pablo Zabaleta, Jack Wilshere, Andriy Yarmolenko and Manuel Lanzini in an almost impressive range of replacements.

Matt Doherty (7 starts, subbed off 4 times)
Nuno likes to use the same players, doesn’t he?