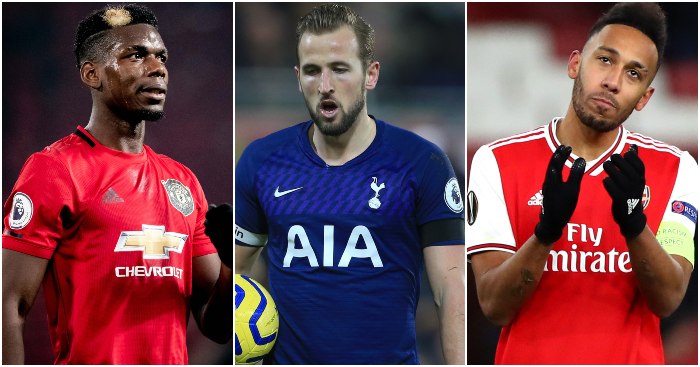 Football is about to collapse and clubs may need money fast. So who – according to transfermarkt – is each Premier League club’s most valuable asset?

ARSENAL: Pierre-Emerick Aubameyang
It is pretty damning that a 30-year-old with just a year left on his contract is Arsenal’s most valuable asset. It really should be Nicolas Pepe but there has been promise but very little that counts as tangible return on that £72m investment. Thankfully, the PEA has many suitors willing to pay for a guaranteed goalscorer.

ASTON VILLA: Jack Grealish
But then you knew that already. Despite acting like something of a div in the early days of the coronavirus lockdown, Grealish remains a target for Manchester United (and Spurs and Everton) while simultaneously being Villa’s best chance of survival in terms of both relegation and economic crisis.

Would you be happy?

BOURNEMOUTH: Nathan Ake
A 25-year-old Dutch international who has come through the Chelsea system? Of course he is valuable. What is truly astonishing is that Ake has actually been at Bournemouth for almost three years without being the subject of the kind of approach that the Cherries could not turn down. Manchester City really should be interested; we said so in January.

BRIGHTON: Neal Maupay
That’s the transfermarkt verdict but we think they have underestimated the value of Lewis Dunk in a central defensive market that saw Harry Maguire move for £80m last summer. Even at 28, Dunk is probably worth more than 23-year-old French striker Maupay, who is likely worth pretty much exactly what Brighton paid for his services (£20m) after a B- kind of season.

BURNLEY: James Tarkowski
We think they have this one wrong too. Tarkowski is a solid performer that would certainly earn the Clarets a hefty profit on the £3m they paid Brentford for his services, but Dwight McNeil is the jewel in the crown, the one that got away from Manchester United and the one most likely to go back for a fee north of £40m.

CHELSEA: N’Golo Kante
And rumour has it that Chelsea are willing to sell the double Premier League champion after the worst season of his career. If they want to challenge Liverpool then they may have to mimic Liverpool in selling their most valuable asset to fund a revolution. And it can be argued that Chelsea will not miss Kante as they now have Billy Gilmour.

CRYSTAL PALACE: Wilfried Zaha
The problem for Palace is that no other Palace player is worth even half a Zaha so if they sell the Ivory Coast winger to make ends meet, exactly where would they go from there? They were lucky to unearth an Aaron Wan-Bissaka but there is little sign of that pay-day happening again…

EVERTON: Richarlison
Six goals in 19 games for Brazil ensure that Richarlison will had admirers across Europe even after a season in which water has been trodden rather than cleared. But the man is only 22 and he will only get better; if the Toffees decide to cash in, they will make a profit on the £40m transfer that upset Paul Merson but now looks like a bargain.

Now that everyone’s asleep, I am here to tell you that Richarlison is the best Brazilian in the league. pic.twitter.com/1pICg1SCKy

LEICESTER CITY: James Maddison
Another target for Manchester United but one that is likely to stay at Leicester. Having eked £80m out of United for Harry Maguire, the Foxes would want a similar sum again for Maddison. That looks like silly money after a season which has not quite reached the heights of last; he has not claimed a Premier League assist since December.

LIVERPOOL: Mo Salah and Sadio Mane
They cannot split them and neither can we. Either would bring in over £100m for the Reds if the coronavirus crisis left them needing a financial boost. There are persistent rumours that Mane wants to join a Spanish giant to fulfil his dream of winning Ballon d’Or and at 28, there is some argument to be made for his sale.

“He [Salah] may score more goals than Mane but Mane’s work rate for the team, he’s unselfish, always looks for others first, he’ll get his fair share of goals. So you’d have to say Mane, you can’t sell Mane, he’s so important.”

MANCHESTER CITY: Raheem Sterling
Not just the most valuable player at Manchester City, but the most valuable player in the Premier League according to transfermarkt. Remarkably, he is still only 25 so edges narrowly ahead of (undoubtedly the better player) Kevin de Bruyne. Of course, the idea that City might need to ‘cash in’ sounds ridiculous because it absolutely is.

MANCHESTER UNITED: Paul Pogba
In reality, Manchester United would probably demand more for Marcus Rashford because wages, nationality and pain-in-the-arseness would be factors, but Pogba’s stock is undoubtedly still high across Europe. Would they still make a profit on the £89m that remains the British record transfer fee paid? They might when they trigger that contract extension.

NEWCASTLE UNITED: Allan Saint-Maximin and Joelinton
Luckily for Newcastle, a £300m Saudi takeover makes them immune to financial crisis and saves them the job of trying to find a club willing to give them back half the £40m they spent on Joelinton.

The Prem isn’t ready for a front three of Mbappe, St Maximin and Joelinton https://t.co/493y9Clkql

NORWICH CITY: Todd Cantwell and Max Aarons
We all know that Emiliano Buendia is the best player at Norwich, but he is not English so it’s Cantwell and Aarons who will probably command the larger fees when Norwich’s relegation is eventually confirmed either on or off the pitch.

SHEFFIELD UNITED: Sander Berge
Well they did pay a club record fee for Berge in January and there is an assumption that he has largely retained his value, even if he has actually played only 210 minutes of Premier League football and actually lost his place for the 1-0 win over Norwich that saw the Fleck-Lundstram-Norwood triumvirate restored.

SOUTHAMPTON: Danny Ings
If we tell you that Ings scored 15 Premier League goals for Southampton this season and his closest contender scored four, you get a sense of a value to the Saints that goes beyond pounds and pennies. If reality bites at St Mary’s, it will be Ings who is sold to Newcastle after they get turned down by Edinson Cavani.

Question for the readers at home. If I use this joke from The Simpsons to describe Danny Ings’ season, is that going too far? Or not enough? pic.twitter.com/FgYW0Yr7gN

TOTTENHAM: Harry Kane
You might have heard of him. You might also know that Tottenham will only sell for a massive fee (though their stance might shift the longer they have no match-day income from that massive stadium) and that it would be folly for Manchester United to pay that fee.

WATFORD: Ismaila Sarr
He has barely played for Watford but he is just 22 and cost around £30m just a few months ago so there is an assumption that he has retained most of his value even while sat on the Hornets’ bench. In reality, Watford would probably want more for Abdoulaye Doucoure if one of the big guns came calling.

WEST HAM: Declan Rice
The one that got away from Chelsea and the one that might well end up back at Chelsea if they get their way. When the money runs out in east London, it will be Rice up on a plinth with Davids Sullivan and Gold asking for bids.

WOLVES: Raul Jimenez and Ruben Neves
And it’s at this point that you realise what an excellent job Wolves have made of having a fair whack of money. Come the apocalypse, they have silver to sell.