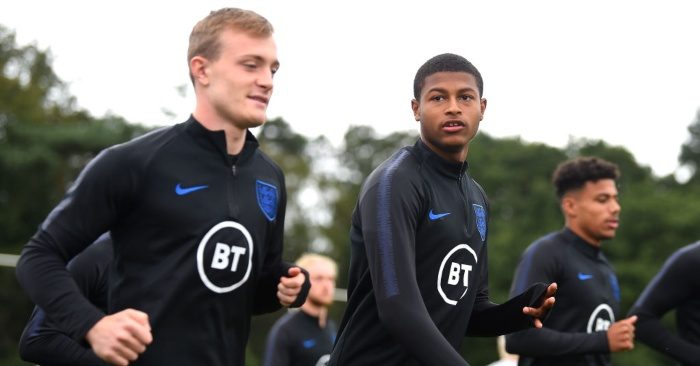 We are talking call-ups here, not caps.

ARSENAL – Ainsley Maitland-Niles
It could be Reiss Nelson. It could be Joe Willock. It could be Eddie Nketiah. It won’t be Matt Macey. But most roads lead to Ainsley Maitland-Niles as a prime Gareth Southgate pet project. The 22-year-old is versatile, a regular at international youth levels and is featuring consistently in the Premier League. Hector Bellerin will reprise his right-back role when he returns, but Unai Emery is a known fan of his current stand-in. Southgate is well-stocked in that position, but Maitland-Niles is equally adept in central midfield. It is rare that a Big Six regular goes unnoticed for too long.

ASTON VILLA – Jack Grealish
‘An England future and a career spent under the sun beckons,’ wrote the slightly giddy Seb Stafford-Bloor back in June. It does feel like England will look towards Grealish sooner rather than later, though he may have to lift himself and his club away from the bottom of the Premier League first. And that might mean scoring his second ever top-flight goal four years after his first.

Can anybody other than Lingard, his family or Marcus Rashford provide me with a sound rationale as to why @JesseLingard is in the England squad whilst @JackGrealish1, a vastly superior player on every level, has missed out? He can’t still be in credit for scoring against Panama?

BOURNEMOUTH – Aaron Ramsdale
There are seven Englishmen currently playing in goal for Premier League sides. If we a) had the time and b) could be arsed, we could work out when we last had such an abundance of goalkeeping talent. Ramsdale is being picked by Eddie Howe for Bournemouth and by Aidy Boothroyd for England’s Under-21s. “I’m proud every time I get called up for England,” he said last week. Imagine how proud he will be when ‘proper’ England come calling.

BRIGHTON – Adam Webster
It’s been almost six years since Webster last pulled on an England shirt for the Under-19s in a side captained by Calum Chambers. Ruben Loftus-Cheek is the only member of that day’s starting XI who is currently in Southgate’s plans. But could Webster join him after a £20m move to Brighton? He has seen the door kicked open by Tyrone Mings so he could just slide on through…

BURNLEY – Dwight McNeil
‘A 19 year-old English winger with excellent left-footed delivery, a lovely upright running style and the responsibility to play in both directions; don’t we usually over-react to that kind of player in this country?’ asked Stafford-Bloor last month when ostensibly writing about Ashley Barnes. It’s difficult not to conclude that McNeil would be on the edges of the England squad already if he played anywhere but Burnley. In reality, he awaits his first England Under-21 cap.

Twelve months on from his full Burnley debut, Dwight McNeil has received his first call-up to the @England U-21s. It’s been quite a year! pic.twitter.com/OvkShZLyZA

CHELSEA – Fikayo Tomori
Over three years after his first Premier League appearance, Tomori made his second for Chelsea last week against Sheffield United. How much he plays after the return from injury of Antonio Rudiger is debatable, but Tomori’s 15 Under-21 caps makes him chock-full of England DNA. And with Loftus-Cheek, Callum Hudson-Odoi and now Mason Mount already involved, the Canada-born centre-half must be the next blue cab off the rank.

CRYSTAL PALACE – James Daly
It’s tempting to record an N/A here after Aaron Wan-Bissaka had to leave Crystal Palace for Manchester United to get a call from the FA. But 19-year-old James Daly is highly rated and might have a sniff of a sliver of a chance. He signed a new contract in the summer and said: “I am delighted. I feel like it is good to get it all sorted and continue my development at the club and hopefully work my way up and get some minutes for the first team – that will be my aim.”

EVERTON – Dominic Calvert-Lewin
There is such a dearth of England No. 9s (hence, presumably, the fuss about Marcus Rashford) that Calvert-Lewin might well have got a call-up if he had managed to score two or three goals in the opening games of the season. Oh and he might also have kept his starting place and not had to hand it over to Moise Kean. That leaves us with a nagging feeling that DLC’s big chance has come and gone even at 22; he was reportedly considered by the England coach a full 18 months ago but has since scored just six Premier League goals. But he plays in a position of England weakness so the door is at least ajar.

LEICESTER CITY – Harvey Barnes
“It’s too early for me,” said Barnes just a few weeks ago when asked about an England call-up after his screamer against Sheffield United. “You’re not going to get called up to the England team unless you’re playing for your club.” A few days later, Barnes started for Leicester in a 3-1 victory that will probably secure him another outing against Manchester United this weekend.

List of midfielders that would’ve been better to receive an England call up than Lingard:

As well as most other English midfielders

LIVERPOOL – Rhian Brewster
He is now an England Under-21 international – making his debut along with Mason Greenwood from the bench last week – but a senior call might be a long time coming as even young Liverpool players need to actually be playing for Liverpool before they can make that giant leap. Yet to make the bench for a Premier League game, this was not what was promised when Jurgen Klopp declined to sign a new striker to replace Daniel Sturridge this summer because Brewster is “a top striker” and “a top talent”.

MANCHESTER CITY – Phil Foden
Less than two months separate the birthdays of Brewster and Foden, which makes you wonder why there are incessant demands for Pep Guardiola to play Foden but nobody mentions Brewster being on the sidelines at Liverpool. In reality, Foden has played 38 games for City at the age of just 19 and has already claimed five major trophies; things are going more than okay. “Well, he’s up against Kevin De Bruyne, Bernardo Silva, Ilkay Gundogan and David Silva so I’ve to respect Manchester City and their decisions,” says Southgate. Fair.

MANCHESTER UNITED – Mason Greenwood
“Natural finisher? Well, they’ve still got a way to go, because Mason’s more of a natural finisher than those two,” said Ole Gunnar Solskjaer last week when bemoaning the inability of Anthony Martial and Rashford to score scruffy, poacher’s goals. Greenwood is just 17 but has come off the bench in all four of United’s Premier League games this season. And now he has come off the bench for the England Under-21s too. It went pretty well.

NEWCASTLE UNITED – Sean Longstaff
Had Longstaff moved to Manchester United this summer, he would probably have been celebrating an England call by now. But he remains at Newcastle, waiting in vain to be beckoned along with Isaac Hayden and Jamaal Lascelles, while locals moan about England scouts not coming as far north as Newcastle. Which is weird because Southgate lives in Harrogate. Working against him in these days of England ‘pathways’ is a complete lack of youth international history.

NORWICH CITY – Ben Godfrey
There are genuine options here, with Ben Godfrey, Max Aarons and Todd Cantwell all starting every one of Norwich’s first four Premier League games. Aarons is probably the most promising, but England have a wealth of right-back options so we will plump instead for 21-year-old centre-half Godfrey, who captained England’s Under-21s on Monday night on his first start. Boss Daniel Farke believes he can be genuinely world class. Fingers crossed.

SHEFFIELD UNITED – Dean Henderson
They’re not short of Englishmen at Sheffield United, but they are short of young Englishmen. Dean Henderson is the only Englishman under the age of 25 to feature in the Premier League this season, and he technically belongs to Manchester United. There was some talk of a call-up for the former England Under-21 man to replace Jack Butland but Southgate eventually opted for the safe, gnarled hands of Nick Pope.

SOUTHAMPTON – Che Adams
We would forgive you for forgetting, but Angus Gunn has already been called up, and James Ward-Prowse has already been capped. That leaves Adams, who could well ‘do a Callum Wilson’ and appear from the fringes of the England bubble with a decent scoring record. All he has to do now is start scoring some actual goals in the Premier League. Right now, he is missing those chances; nobody has spurned more than his four Opta-defined Big Chances this season.

The reaction of his teammates says it all… 😍

TOTTENHAM – Oliver Skipp
Kyle Walker-Peters might be playing actual first-team football but England are not crying out for right-backs. But eventually, they may want the midfield talents of Skipp, who has so far been limited to a couple of very short Premier League cameos. “You have to push on, impress again, have the same attitude and hopefully carry on and build again,” said 18-year-old Skipp this summer. He must be encouraged by the progress of Harry Winks; there is a path through the Tottenham Academy that eventually leads to England.

WATFORD – Ben Wilmot
On loan at Swansea and cannot actually get a game for Swansea, but he has still been called up by the England Under-21s because the 19-year-old plays as a centre-half, and young English centre-halves are rather thin on the ground (and the air). Wilmot may be surplus to requirements at Watford right now, but one of the oldest squads in the Premier League will need a re-boot sooner or later.

3 goals in 4 appearances! West Ham’s Grady Diangana is ripping it up on loan at West Brom pic.twitter.com/bQPWyhaGcK

And he’s in England’s Under-21 squad for the first time. He is a bloody good winger and he has half a chance of following Michail Antonio all the way into the England squad. Well, maybe about an eighth of a chance.

WOLVES – Morgan Gibbs-White
No, not Conor Coady. If he is behind James Tarkowski, Lewis Dunk and Tyrone Mings, then he is not in the queue at all. To the chagrin of incensed Wolves fans, Coady does not appear to be anywhere near the plans of Southgate; perhaps because he plays in a three-man defence. But Gibbs-White is clearly on some sort of fast-track program to the senior set-up, saying last week after call-ups for James Maddison and Mason Mount: “With the pathway that’s going through the England set-up at the minute, it’s frightening. It’s only an age group away, so it’s definitely a benchmark because seeing that they can do it shows that anyone can do it.”