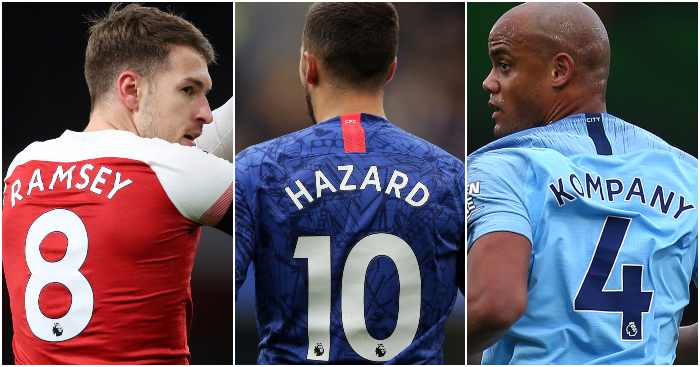 We’re focusing on 1-20, otherwise this could take a while…

Arsenal
Vacant numbers: 3, 8, 12, 13
Formerly held by: Kieran Gibbs, Aaron Ramsey, Stephan Lichtsteiner.
Good news for any new Arsenal signings who just happen to be fans of the number 3 – the Gunners have the full range available after Danny Welbeck and Petr Cech vacated 23 and 33. And 8 is just 3 looking in the mirror. Unai Emery would like to hang the No.3 off Kieran Tierney’s back, but the Celtic no.63 will cost a lot more than that.

Bournemouth
Vacant numbers: 7, 14
Formerly held by: Marc Pugh, Brad Smith
Pugh was released at the end of the season after nine years at Bournemouth, while Lloyd Kelly might call dibs on Smith’s No.14 while the on-loan left-back wears 11 at Seattle Sounders.

Brighton
Vacant numbers: 2, 12, 15, 18
Formerly held by: Bruno, Niki Maenpaa, Jamie Murphy, Connor Goldson
Matt Clarke, Graham Potter’s only recruit so far, wore 5 at Portsmouth so he could take 15, or wait for Lewis Dunk to move and take the 5 off his back.

Burnley
Vacant numbers: 8, 9, 17, 19
Formerly held by: Dean Marney, Sam Vokes, Johann Berg Gudmundsson, Jon Walters
Burnley’s only summer signing so far isn’t likely to make a grab for any of the numbers Sean Dyche currently has to dish out.

Chelsea
Vacant numbers: 4, 10, 15, 16
Formerly held by: Cesc Fabregas, Eden Hazard, Victor Moses, Marko van Ginkel
As the likely only new arrival of the summer, Borussia Dortmund former No.22 Christian Pulisic looks the red-hot favourite to take Hazard’s No.10. Tiemoue Bakayoko could yet vacate the No.14 permanently while we are presuming that Tammy Abraham is coming back for his No.19.

Crystal Palace
Vacant numbers: 1, 16, 19, 20
Formerly held by: Julian Speroni, Diego Cavalieri, Freddie Ladapo, Jonathan Williams
Palace’s No.1 jersey is available for the first time in 13 years – might Jack Butland or Tom Heaton be the keeper to fill Julian Speroni’s gloves? Man Utd would like to render Palace’s no.29 vacant too, but Woodward…

Everton
Vacant numbers: 5, 6, 7, 8
Formerly held by: Kurt Zouma, Phil Jagielka, Yannick Bolasie, Andre Gomes
Everton there, performing a lovely Steps tribute via the medium of vacant squad numbers. Marco Silva wants Zouma and Gomes back in their 5 and 8 jerseys as soon as Chelsea and Barcelona will allow. Sandro Ramirez, Cuco Martina and Oumar Niasse are clinging on to 9, 15 and 19 respectively though it is doubtful those outcasts, loaned out last season, will be occupying these numbers come the start of the new campaign.

Liverpool
Vacant numbers: 13, 17, 18, 19
Formerly held by: Alisson, Daniel Sturridge, Ragnar Klavan, Alberto Moreno, Sadio Mane
We would all have understood if Jurgen Klopp had literally ripped the No.1 from Loris Karius’s back last summer before presenting it to its rightful owner. But Alisson has it now, belatedly, a year after the Reds chose not to kick Karius while he was down. Liverpool’s new No.15 Alex Oxlade-Chamberlain jumped in Daniel Sturridge’s grave rather more quickly.

Manchester City
Vacant numbers: 4, 6, 11, 12, 13, 16
Formerly held by: Vincent Kompany, Fernando, Aleksandar Kolarov, Scott Sinclair, Willy Caballero, Sergio Aguero
The No.9 shirt was vacant before Gabriel Jesus grabbed it. Aymeric Laporte wore 4 at Athletic Bilbao so he could move from 14 to replace Vincent Kompany if Harry Maguire doesn’t. The in-demand Leicester centre-half might feel it a fitting tribute to his hero Michel Vonk if he wore 6 instead.

Manchester United
Vacant numbers: 5, 19
Formerly held by: Marcos Rojo, Marcus Rashford
Maguire seemingly doesn’t want United’s No.5 while Rashford’s promotion to No.10 last summer has left Eric Djemba-Djemba’s old shirt vacant. It’s quite possible United will have 6, 7 and 9 available too at some point in the coming weeks.

Newcastle
Vacant numbers: 9, 15
Formerly held by: Salomon Rondon, Kenedy
Toon’s famous No.9 jersey is currently vacant while Mike Ashley faffs about, though former occupant Dwight Gayle might feel he is the rightful owner having returned from his loan at West Brom. Kenedy’s return to Chelsea leaves 15 free too.

Norwich
Vacant numbers: 5, 11, 13, 14, 16, 20
Formerly held by: Russell Martin, Jordan Rhodes, Paul Jones, Wes Hoolahan, Matt Jarvis, Sean Raggett
The Canaries could have all the outfield odd numbers in their first XI available because James Husband, Ben Marshall and Nelson Oliveira made no use of 3, 7 or 9 while they were out on loan last season.

Sheffield United
Vacant numbers: 1, 8, 11, 14, 15
Formerly held by: Dean Henderson, Lee Evans, Scott Hogan, Gary Madine, Paul Coutts
Chris Wilder wants Henderson to channel the spirit of Paddy Kenny, Simon Tracey and Alan Kelly as a Blades No.1 in the Premier League. Evans and Coutts have been shown the door, while loanees Hogan and Madine are back at Villa and Cardiff respectively.

Southampton
Vacant numbers: 8, 20
Formerly held by: Steven Davis, Monolo Gabbiadini
Cedric Soares and Wesley Hoedt are unlikely to be back at St Mary’s to reclaim 2 and 5 respectively, while Harrison Reed could move up to accommodate Saints new boy Moussa Djenepo, who wore 19 for Standard Liege and Mali.

Tottenham
Vacant numbers: 13, 14, 18, 19
Formerly held by: Michel Vorm, Georges-Kevin N’Koudou, Fernando Llorente, Mousa Dembele
Nothing available in Mauricio Pochettino’s first XI as yet, though Kieran Trppier could vacate No.2. Vincent Janssen is still squatting in the No.9 jersey.

Watford
Vacant numbers: 1, 3, 4.
Formerly held by: Heurelho Gomes, Younes Kaboul, Molla Wague,
Ben Foster seems to like the feel of 26 on his back, having worn it during his previous spell with Watford and also at Birmingham, so it may be unlikely that he will take the No.1 vacated by his great mate Gomes. Kaboul’s XXL is also available.

West Ham
Vacant numbers: 9, 13, 18
Formerly held by: Andy Carroll, Adrian, Samir Nasri
West Ham’s No.6 is vacant and will remain so in memory of Bobby Moore. It seems unlikely the Hammers will pay a similar tribute to Carroll. One of the two back-up keepers Manuel Pellegrini has signed this summer will presumably grab No.13.

Wolves
Vacant numbers: 1, 3, 4, 12, 13
Formerly held by: Carl Ikeme, Barry Douglas, David Edwards, Danny Batth, Ben Marshall, Harry Burgoyne
Rui Patricio opted to take the No.11 last season as a nod to Carl Ikeme, who had to vacate the No.1 jersey when illness forced him into retirement. It remains to be seen for how long that gesture continues. Bright Enobakhare is unlikely to be back to claim the No.14 he was allocated last season, shortly before shoved out on loan.