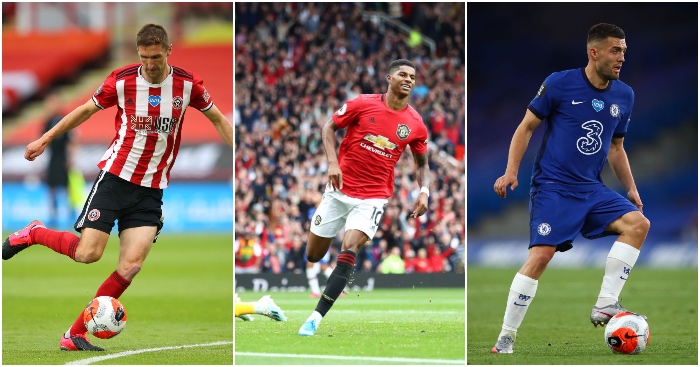 Most Premier League clubs are yet to announce their players of the season. They needn’t bother, we’ve got it covered.

Arsenal: Pierre-Emerick Aubameyang
The contract-swerving striker scored 29 goals and won the FA Cup for the Gunners. Choosing the player of the season runner-up would be difficult, but picking Arsenal’s top man is as easy as a dink over Willy Caballero. Or as easy as Aubameyang made it look, anyway.

Aston Villa: Jack Grealish
Aston Villa would have been down by Christmas without Jack Grealish. The statistics are remarkable. He scored the most goals for Villa (8), provided the most assists (6), completed the most dribbles per 90 (2), and was somehow the most creative passer of the ball (2.5 key passes per 90) and the most accurate (85% pass completion). He is a supremely talented footballer with an outstanding attitude and needs to be playing Champions League football. Villa will be utterly screwed without him.

Bournemouth: Diego Rico
Slim pickings. Nathan Ake may have got his move to Manchester City, but didn’t particularly earn it through this season’s performances. Josh King is inexplicably being linked to PSG and Callum Wilson is still seemingly targeted by everyone. But Diego Rico is realistically the only Bournemouth player to come out of the season with any credit. He was the joint assist leader with four and topped the entire Premier League in interceptions (3.2 per 90mins).

Brighton: Lewis Dunk
He scored the third highest number of goals (3) and provided the second most assists (3) for Brighton, from centre-back. Frank Lampard is reportedly interested in Dunk, and he could do a lot worse. English? Check. Leader? Check. Tall? Double check. He even looks a bit like John Terry.

Burnley: Dwight McNeil
To be tasked with being the creative influencer in a Sean Dyche team is a nightmare. McNeil is expected to play the key passes and provide the assists having run his ass off in solidarity with the rest of the Burnley workaholics for 90 minutes. He’s started every game in the Premier League this season and was off the pitch for just 75 minutes.

Chelsea: Mateo Kovacic
He was far from his best against Bayern Munich, but he’s been Chelsea’s most consistent and effective player this season. His ability to take the ball, shield it and drive past players is second to none in the Premier League.

Crystal Palace: Jordan Ayew
A brilliant signing by Roy Hodgson. £2.5million for a striker who scores 30 per cent of your Premier League goals is an extraordinary deal. Without his output this season, Palace would be 17 points worse off, and if almost anyone else had scored that goal against West Ham, it would have been in the running for goal of the season.

Everton: Richarlison
Just before you write him off, he does something brilliant that reminds you why Barcelona were – and possibly still are – interested in him. He’s got everything you want from a striker, but occasionally seems himself to forget just how good he can be.

Leicester: Jamie Vardy
He’s 33 years old, but harasses, niggles and irks Premier League defenders like a striker two-thirds his age; he’s a savvy whippersnapper; an experienced squirt. Vardy has his hands on the Premier League Golden Boot – scant consolation as Leicester missed out on Champions League qualification on the final day, but a brilliant achievement all the same. The old rascal.

Liverpool: Trent Alexander-Arnold
He’s got a golf bag of a right foot, such is the variety of trajectories and speeds of his delivery from wide areas, and there is now no-one more dangerous over a free-kick in the Premier League. He thrives under pressure and seems to add different qualities to his armoury on an almost match-by-match basis – the improvement is just as frightening as his natural talent.

Manchester City: Kevin De Bruyne
If you were to build the perfect Premier League midfielder it would be Kevin De Bruyne: quick with the ball and without; incredible vision; a great work ethic; powerful; competitive; a perfect touch; a stunning range and accuracy whether passing or shooting. His weaker left foot is better than most other players’, whether they favour that side or not; his right is literally the best around.

Manchester United: Marcus Rashford
Bruno Fernandes made our top ten Premier League players, but Marcus Rashford has had an outstanding season from the get-go. With 22 goals and 10 assists, Rashford was a big part of United’s excellent form post-lockdown, but more importantly dragged them through the dark times before the turn of the year.

Newcastle: Allan Saint-Maximin
His jittery, dynamic dribbling is a joy to watch and his clear delight simply to be playing football for a living is wonderful to see amid the dour expressions worn on the faces of far too many professionals. But don’t confuse the smile on his face with a lack of commitment or desire; he has improved throughout a very impressive debut Premier League campaign. There is more to come.

Norwich: Emiliano Buendia
He created the fourth most chances this season with 83, including 29 in December alone – the most by a player in a single month in Premier League history.

Southampton: Danny Ings
He fell one goal short of Jamie Vardy in the race for the Golden Boot, but he was the most prolific of any striker in the top ten, scoring a goal every 128 minutes. He was consistently finding the net in the midst of the dark days of October and November as well as in the bright new dawn that followed.

Tottenham: Harry Kane
He missed nine games in the Premier League through injury and still notched 18 goals. The established rapport with Heung-min Son was as evident as ever in the post-lockdown mini-season, as well as a growing understanding with Giovani Lo Celso. An increasing propensity to pick up injuries is far less of a concern compared to how Spurs would fare should a trophy-winning club seriously target his signature.

Watford: Gerard Deulofeu
Supremely talented but lacking the competitive desire to play at the very top. It’s difficult to say which Deulofeu would have turned up had he been fit for Watford’s final ten games, but had he played anywhere near the top form he did show more often than not this season, he would have kept them in the Premier League.

West Ham: Michail Antonio
His technical ability is often unfairly ignored, such is the conspicuousness of his pace and power, but his control of the ball and capacity to turn in tight spots has improved dramatically. Before the Premier League hiatus, the only thing missing from Antonio’s game were the goals that came in a flourish in July. He found the net eight times in West Ham’s last seven games to keep them in the top flight.

Wolves: Raul Jimenez
Raul Jimenez has been the greatest leader of any attack in the Premier League this season. He has started 37 of Wolves’ 38 games this season, scoring 17 goals and providing six assists. His movement off the ball is second to none and his work-rate is phenomenal; his finishing is astonishing in its accuracy, variety and beauty.