13 Englishmen make our young players of the season list. The future is bright. 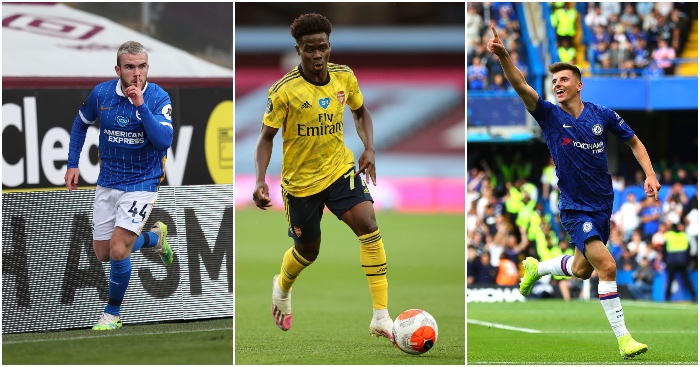 We’ve looked at every Premier League club’s player of the season, now time for the young players of the season. Not 25-year-old footballing middle-agers – actual youngsters. Players must have been 21 or younger when the season started to be considered.

Arsenal: Bukayo Saka
11 assists and four goals in an outstanding debut season for the first team. The winger has been so good as a makeshift full-back there have been suggestions Gareth Southgate could use him on the left side of England’s defence. He – along with these five – is someone Mikel Arteta should look to build his team around.

Aston Villa: Douglas Luiz
“Douglas Luiz’s form has gone through the roof. It was always going to be hard for him playing catch up as he came in with days to go until the season started.” Dean Smith’s faith in the £15million signing has paid off. Reports suggesting Manchester City are already looking at triggering their buy-back clause for the Brazilian will come as no surprise to those who watched him closely in the second half of the season.

Bournemouth: Aaron Ramsdale
He saw 65 goals fly past him, but also saved the third highest number of shots in the league.

Brighton: Aaron Connolly
After the then 19-year-old scored a brace on his debut against Spurs, he said: “Watching Premier League years all the time, to be playing in it and obviously scoring in it now, it’s indescribable, a dream come true. I didn’t really know how to celebrate, to be honest, I can’t really put it into words, I’m speechless.” Lovely, that.

🗣”He gave us extra dimension” pic.twitter.com/ESjVewZtFd

Chelsea: Mason Mount
A goal and an assist in the do-or-die final day victory over Wolves tells you everything you need to know Mason Mount. He’s a big game player; a serious competitor. He may not be the most talented player on the pitch, but he will always be the hardest working.

Crystal Palace: Tyrick Mitchell
Comparisons with Aaron Wan-Bissaka look to be almost solely based on his position, any other likeness isn’t immediately obvious. In truth, there weren’t many options among the Crystal Palace geriatrics.

Everton: Anthony Gordon
“First of all, he has a lot of technical skills. He can combine this with a good physical condition and resistance. He worked but he does not have to change his body. Maybe if he has more power, more strength, he can lose some ability.” Ancelotti knows this kid had got the lot.

Leicester: Harvey Barnes
Despite his six goals and eight assists, there is often a feeling of frustration with Barnes – it’s as though his brain struggles to keep up with his feet at times. But good decision-making comes with experience; there is a very high ceiling his talent can stretch to.

Liverpool: Trent Alexander-Arnold
So good, he’s also the player of the season for the champions.

Manchester City: Phil Foden
A starting place against Real Madrid was hard-earned. He’s been patient, impressed at every given opportunity and is now reaping the rewards. Kudos, Phil.

Manchester United: Mason Greenwood
There is no limit to what Mason Greenwood can achieve. Ole Gunnar Solskjaer said he was United’s “most natural finisher” and he was bang on the money. Right foot, left foot, it doesn’t matter: he hits the ball as purely as anyone in the Premier League.

Newcastle: Matty Longstaff
It had to be one of the brothers; Matty nicks it for that “dream” debut goal against Manchester United. Spine-tingling.

Norwich: Max Aarons
It could have been Todd Cantwell, but his season petered out somewhat. It could have been Ben Godfrey, or full-back Jamal Lewis. But Max Aarons on the right flank has arguably been more impressive than his Liverpool-linked teammate. He makes more interceptions, clearances, blocks and key passes, and had one assist in the Premier League while Lewis drew a blank.

Sheffield United: Sander Berge
Bramall Lane is a welcoming place, but Sheffield United is not an easy team to join midway through the season. No matter what Garth Crooks says, theirs is a complex style of football to play; one that means it’s hard to hit the ground running. He’s started all but one Premier League since he arrived, scoring four goals in the process; he’s “Sanderrrr Berrggeee”.

Southampton: Michael Obafemi
As Ralph Hasenhuttl’s confidence in £14million summer signing Moussa Djenepo dwindled, his trust in academy product Obafemi increased. His first Premier League goal of the season against Chelsea was a stunner, and he added a further two goals and two assists in just five more starts.

Tottenham: Steven Bergwijn
Japhet Tanganga burst on to the scene on his debut against Liverpool, but injury curtailed his season; Oliver Skipp has been wasting time for the last two seasons. Steven Bergwijn hasn’t been brilliant having arrived for £27million in January, but there are all the makings of an effective Premier League forward – just ask Harry Maguire and David de Gea.

Watford: Ismaila Sarr
Sadio Mane was “jealous” his “little brother” didn’t sign for Liverpool last summer and the Reds are set to miss out on him again, as they can’t compete with the financial might of Crystal Palace. His performance in Watford’s 3-0 destruction of Liverpool illustrated why his compatriot fancied playing with him, rather than against him.

West Ham: Declan Rice
The leader of West Ham at just 21-years-old. Dependable, assured, versatile and with a knowledge of the game way beyond his years: Rice is improving all the time. Chelsea could do a lot worse.

Wolves: Pedro Neto
Three goals and three assists from just nine Premier League starts. Wolves have got fierce competition for places either side of the undroppable Raul Jimenez, with Adama Traore, Diogo Jota and now Daniel Podence vying for the spots with Neto. But rivalry breeds improvement; expect the 20-year-old to do just that.