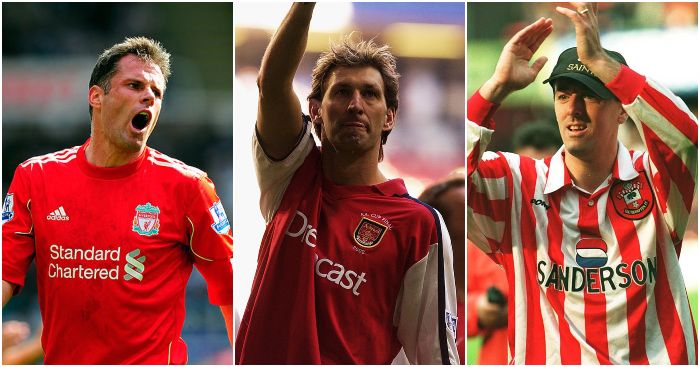 No loan moves, no late sojourns in far-away lands…just one-club men who did not play for another league club either in England or elsewhere. They are a dying breed…

ARSENAL – Tony Adams (1983-2002)
One of the great one-club men, with a career spanning 19 years, four league titles and over 500 league appearances. It’s the kind of service that earns you a statue. And the presidency of the Rugby Football League, it seems.
Next? Alex Iwobi currently has 100 PL appearances for Arsenal and has played for no bugger else. Statue incoming?

ASTON VILLA – Billy Walker (1919-1934)
Billy Walker made 531 appearances for Villa, scoring a really quite magnificent 244 goals. He had joined the Villa at the age of 14 and did not kick a ball for another club until his retirement, winning an FA Cup trophy along the way. He would win the same trophy twice as a manager – with Sheffield Wednesday in 1935 and Nottingham Forest in 1959.
Next? Not Jack Grealish, as he went on loan to Notts County. So the ‘honour’ goes to winger Keinan Davis, who played five Championship games last season as Villa chased promotion.

BOURNEMOUTH – Paul Morrell (1983-1993)
Of course you already know that Paul Morrell scored the winning goal in the first Football League Trophy Final, when the Cherries beat Hull City 2-1 in 1984 in front of a crowd of 6,544. Harry Redknapp was the manager that day.
Next? Jack Simpson. These are slim pickings.

BRIGHTON – Steve Burtenshaw (1952-1996)
Winner of the Third Division (South) and Fourth Division with Brighton, you probably know him better from the whole ‘taking bungs when working with George Graham at Arsenal’ farrago.
Next? Solly March’s sole appearance for Lewes in the Isthmian League Premier Division as a 17-year-old does not rule him out of this list.

BURNLEY – George Bray (1937-1952)
And those 15 years only covered George Bray’s playing career; he would stay at the club as coach and kit man, finally leaving the club in 1992. He was part of a Burnley defence that was known as the ‘Iron Curtain’, promoted to the top flight in 1947, the same year they would reach the FA Cup final.
Next? Burnley fans would like it to be Dwight McNeil, but he is surely too good to stay in the long term.

CHELSEA – Tommy Law (1957-1969)
It could have been John Terry, but instead it is Tommy Law, a Scottish full-back who generously said: “I was little more than a spectator. The ball always belonged to our forwards.” This was a man who played with fellow Scots Hughie Gallacher and Alex Jackson, so the forwards were worth watching.
Next? Callum Hudson-Odoi is one of few Chelsea youngsters yet to have been conscripted into the Loan Army.

CRYSTAL PALACE – Terry Long (1955-1970)
Mr Reliable, defender Terry Long put together a sequence of 214 consecutive appearances in the midst of a playing career that saw him never even think about leaving Crystal Palace. A true legend, he stayed on as coach and never stopped going to Selhurst Park.
Next? Well it’s not going to be Aaron Wan-Bissaka. Somebody else needs to break through sharpish.

EVERTON – Brian Labone (1958-1971)
“One Evertonian is worth 20 Liverpudlians,” is the famous quote from Brian Labone, who led the Toffees to two league titles and two FA Cup trophies. “Brian was Everton. If you could put together a team of every player that has ever captained Everton, every one of us would turn to Brian to lead us out. He will always be known as the captain of Everton,” said Kevin Ratcliffe on his passing.
Next? Tom Davies is 89 games into his Everton career. But is he good enough to stay in the long term?

LEICESTER CITY – Sep Smith (1929-1949)
Don Revie dedicated an entire chapter in his autobiography to ‘What I Owe to Sep Smith’, who was his mentor at Leicester City. A suite at the King Power Stadium is named after the man christened ‘Septimus’ as he was the seventh son born into his family. History does not record whether he has a younger brother called Octimus.
Next? Now there’s a question. Pretty much every Leicester kid has been out on loan at least once.

LIVERPOOL – Jamie Carragher (1997-2013)
Will there ever be another in modern football? A true legend, he won everything there was to win at Liverpool, barring the very small matter of a league title. We love him (and not just because he retweets our stuff).
Next? Trent Alexander-Arnold is well on his way.

MANCHESTER CITY – Frank Swift (1933-1949)
Frank Swift did play for various sides as a guest during the war, but in peace-time he was truly a one-club man, the goalkeeper playing in every City game bar one for four consecutive seasons (including the season they won the title) until Adolf Hitler rudely interrupted his career. Post-retirement, he became a journalist and perished in the Munich air disaster.
Next? Phil Foden. And this really could happen.

MANCHESTER UNITED – Ryan Giggs (1991-2014)
Simply the most decorated player in English football, and every club ball he kicked was for Manchester United. He played 963 United games, earning himself 13 league titles, four FA Cups and two Champions League medals. He wasn’t bad, you know.
Next? Marcus Rashford? Though he needs to sign that new contract first.

NEWCASTLE UNITED – Billy McCracken (1904-1923)
Yes, 19 years as a player at Newcastle for Billy McCracken, one of a handful of players to notch over 400 games for the club. He is widely credited with being influential in the changing of the offside rule as he was so adept at catching opposition players off guard. Opposition fans hated him but the Toon Army loved him. He won three league titles in the 1900s despite originally arriving from Belfast as a back-up defender.
Next? Both Sean Longstaff and Paul Dummett have had loan spells elsewhere, so the next pure one-club man might yet need to be born.

NORWICH CITY – Peter Mendham (1978-1987)
Steve Bruce, Dave Watson and Chris Woods were the more famous members of that mid-Eighties Norwich side that reached the League Cup final and then won promotion to the First Division. But none of those players were jailed for stabbing their girlfriends.
Next? Max Aarons could be the man. Though it’s more likely that he will exit next summer.

SHEFFIELD UNITED – Joe Shaw (1946-1966)
Centre-half Joe Shaw made his debut in 1948 and went on to make 632 league appearances for the Blades as the smaller centre-half in their ‘double banking’ defensive system. He holds a ball to his chest in the statue that stands outside Bramall Lane.
Next? Who knows? Even Jake Eastwood has had a loan spell at Chesterfield.

SOUTHAMPTON – Matt Le Tissier (1986-2002)
Simply a legend. But he paid the price – he is one of the best players to have won f*** all.
Next? James Ward-Prowse is still only 24 but is already 234 games into his Southampton career.

TOTTENHAM HOTSPUR – Bill Nicholson (1938-1955)
“It’s been my life, Tottenham Hotspur, and I love the club,” said the great Bill Nicholson, who played in a title-winning side and then managed one. Remarkably, of the 17 major honours won by Spurs in their entire history, Nicholson was involved in nine.
Next? Harry Winks is over 100 games into a Tottenham career that could stretch through the next decade.

WATFORD – Nigel Gibbs (1983-2002)
Watford fan, Watford right-back and then Watford coach, Nigel Gibbs made almost 500 appearances for the Hornets in almost two decades which saw him play in three divisions. Of course, he also stayed to coach before being ousted by Aidy Boothroyd. And what does he know?
Next? Are you joking?

WEST HAM – Ronnie Boyce (1959-1973)
“I spent quite a few years at West Ham and loved every minute of it,” said Ronnie Boyce this year after he was awarded with a Lifetime Achievement Award for years of service as a player – including the winner in the 1964 FA Cup final – and a coach at West Ham. He was nicknamed ‘Ticker’ because he was the heartbeat of that West Ham side of the 1960s.
Next? Declan Rice could end up playing for more countries than clubs, while Mark Noble will always regret loan spells at Hull and Ipswich Town.

WOLVES – Billy Wright (1939-1959)
The legendary Billy Wright missed only 31 games for Wolves during the 1950s, a decade in which he won three league titles. He also managed to amass over 100 England caps and is in every Hall of Fame worthy of the name.
Next? Morgan Gibbs-White is 54 games into his Wolves career and is still a teenager. It could happen.