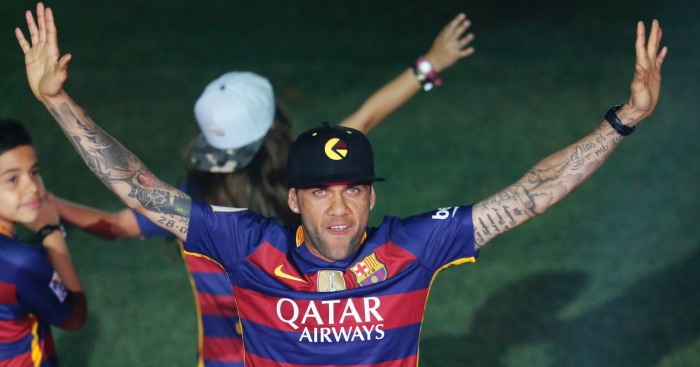 Who’s this then?
Daniel Alves da Silva is now 37 years old and playing in Brazil for São Paulo. He has been one of the finest attacking right-backs of the 21st century. He holds the distinction of, quite incredibly, being the most decorated player in the entire history of football. He has won somewhere between 41 and 43 trophies – accounts vary. That, like sales of Thriller, everyone has lost track of the real total, reflects just what a huge achievement this is.

He’s also the second most decorated defender of all-time in European competitions with nine European medals, leaving him equal with Paolo Maldini.

Among his giant CV are six La Liga titles under his belt with Barcelona, two in Ligue Un with PSG, a Serie A with Juventus, two UEFA Cups with Sevilla and three Champions League medals at the Nou Camp.

“All the top players play in the Premier League, Jeff.” Aye, right.

The only major title that escaped him was a World Cup with Brazil and at least a nomination for a Ballon d’Or. But then defenders rarely get nominated, and full-backs, never.

The young, as yet non-tattooed Dani’s career began at Bahia in Brazil back in 2001 where he won the Campeonato Baiano in 2001.

This sent him to Sevilla, initially on loan, where he would play 250 games across six seasons; he chipped in with 16 goals. It was here when Europe woke up one day to find one of the fastest men on the pitch burning up the right wing, despite notionally being a defender. In June 2006, Liverpool had reached an agreement with Sevilla for the transfer of Dani but unable or unwilling to pay the £8 million Sevilla wanted.

Chelsea also wanted him but also didn’t offer enough cash. Eventually he went to Barcelona for £23million and spent eight seasons hoovering up every trophy available. When that was over, Juve snaffled him for a title and cup-winning season. Then it was on to PSG for two more trophy-laden seasons before legging it home to Sao Paolo, of whom he had always been a fan. And there he remains, still flying up and down the wing, still looking like he has just broken out of a maximum security jail.

His international career started in 2006. He has played 118 games, scoring eight times. From 2005 to 2016, including internationals, he played at least 50 games per season, often over 60. In 2006/07 he racked up an almost incredible 69 appearance for club and country.

All this despite the fact he was kicked up into the air and hurt so much…or so he’d have us believe.

Why the love?
Let’s get this right. A lot of people don’t love Dani. They really don’t. Quite the opposite. But this is one of the reasons that other people do. He’s a troublemaker, a trickster, a piss-taker, a firestarter, a twisted firestarter and as such is very much the rennet that sours the milk and makes the curds.

And let’s be honest, he looks like one serious badass. More like a character in an action film franchise than a footballer, it’s easy to imagine a movie opening with him as head of a gang that has just pulled off a heist of a Monte Carlo casino, carjacking a Maserati, driving through the streets at 150mph, whilst discharging a semi-automatic weapon at pursuing police. An impossibly beautiful young woman in a tight white dress screams as she sits beside him counting money: ‘Shoot those muthaf**kers, Dani. Shoot ’em, honey!’ Freeze frame on Dani making a knowing wry grin and raised eyebrow to the camera. Theme music begins.

C’mon, we’d all watch that wouldn’t we? Hard to believe it doesn’t actually exist. One of football’s really big characters for the last couple of decades, he is also simply a magnificent player capable of all manner of quite incredible passes and quite unbelievable dives.

Let’s deal with the diving, then. You don’t have to touch Dani for him to go down, you just have to shape to tackle him and whoops-a-daisy he’s down and winning a free-kick. But if you do actually make body contact with the Brazilian he is liable to leap into the air, rotate by 180 degrees whilst holding a random part of his anatomy and screaming as though he has been castrated with a pair of blunt scissors. He may stay down for up to five minutes, or until the opposition player has been sent off.

That there are 160 cameras at every game to capture his feigning in high definition slow-motion seems to not inhibit him in the slightest and you’ve got to admire that Olympic degree of fecks-not-cared. It takes really big balls to style out repeated, often successful attempts at cheating.

But then, for all that, he’s worth it because with the ball at his feet, he’s an absolute magician. Notionally a full-back, I’m not sure I’ve ever seen him do any hardcore defending. He seems to see the defensive third of the pitch merely as a runway to get up to intercontinental missile speed for another raid.

He actually seems incapable of ever getting even the slightest bit tired despite covering the entire length of the pitch, usually running full pelt.

But it’s not just his athleticism that stuns, it’s his ability to pass the ball with unerring accuracy in the tightest situations. Nothing seems beyond him. The wide right, whipped curve ball onto the head of a striker, the wee dink over a defender, a 20-yarder over the top of the defence, the slide-rule defence-splitter: all are colours he paints with all the time.

And he might just thump a 25-yarder into the top corner too, of course.

While attacking full-backs have been around for as long as football, in the 21st century Dani Alves redefined the notion of what the position could achieve. Once the least favoured role to play, in 2021, if you don’t have fantastic attacking full-backs, you’re nobody and that’s in no small measure due to Mr A’s example.

Obviously, when at Barcelona, Messi was the King but the power behind the throne was as much Dani Alves as anyone. He was the electrical charge that gave power to anything that happened on the right side of the pitch.

What the people say
If Dani has torn your side apart and let’s be honest, it’s quite likely he has (he was part of the Sevilla team that denied Middlesbrough the UEFA Cup in 2006 but I’ve long since forgiven him for that) with his winning mix of high skill and dark arts, it might be hard to confess love for him. So not a lot of contributions this week, but Dani love remains one of the best deep cuts in football’s discography.

‘Love him because he’s a shithouse as well as a hugely brilliant player. Ridiculously decorated as well, and he wasn’t a passenger in that Barca side, he was a fundamental part of it. One of the most effective players of the last 15 years or so. So much more than a right back.’

‘Saw him play for Sevilla against Spurs, the antics, the rolling around on the floor pretending to be injured, begrudgingly respected by opposition fans but hated in equal measure.’

‘His chaotic good energy was unbelievable. He was Malcolm Reynolds (Firefly) on the pitch.’

Remember how tiki-taka was so dynamic with Barça yet so pedestrian down the wings with Spain? The reason is Dani Alves.

‘Ran riot against us (Boro) in Eindhoven. The get.’

‘Loved him as a player. Devastated when Liverpool missed out on him before he left Sevilla for Barcelona. Watched the Amazon documentary on the Brazil team and got a bit more of an insight into him. A wonderful person by all accounts and tearing it up now in midfield at 37. Class.’

Dani eats a racist’s banana entirely impassively. The message is clear: F*ck you.

One of the finest headed own goals at any World Cup:

A truly stunning 10 assists each different, each brilliant:

What now?
He’s contracted until 2022 at his boyhood club São Paulo, where he is apparently playing as an attacking midfielder: a role he’ll be ideally suited to. His passing is so good that even if his legs run out of steam he could pretty much patrol the centre circle, spraying balls around the pitch well into his 40s. With 843 league games and 118 international caps to make a career total of 961, he’s likely to wind up as one of the elite who have made well over the 1000+ appearances mark. He may even surpass fellow Brazilian full-back Roberto Carlos’ 1,127 by the time he’s done. He claims to want to be part of the Brazil team at the next World Cup – if it goes ahead – in Qatar, despite being 39 when it rolls around.

Given the large part of his career has been conducted at the very top of the game, his longevity is one of modern football’s more remarkable stories. What his post-game career holds is anyone’s guess but I’d speculate he’ll get some more tattoos and hopefully start that action hero franchise.

I’ll leave the words to the man himself who in 2019 told The Guardian:

“What matters is what I give people. I want people to have fun, to smile. Sometimes, people are too bitter. My objective is always to give my best to people. I might be crazy, but I’m a good kind of crazy. I want everybody to be happy.”