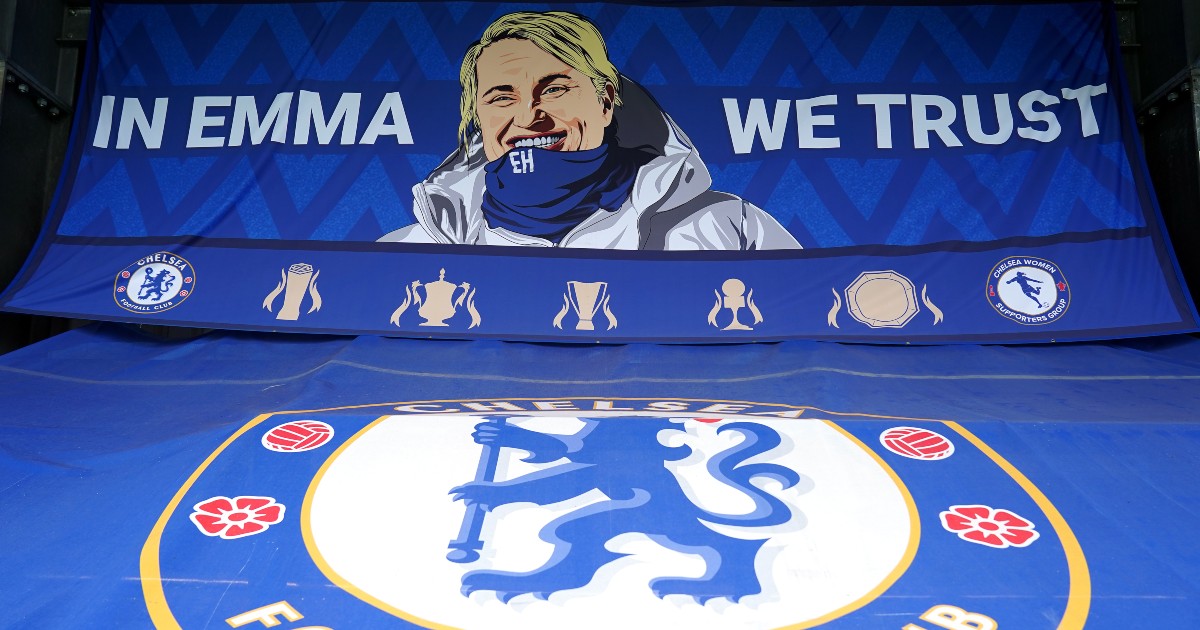 Emma Hayes has reminded us of what a co-commentator and pundit should really be to the viewer. The Chelsea manager is phenomenal.

Who’s this then?
Emma Hayes is from Camden, is 44 years old, is the current manager of Chelsea FC Women and is a Euro 2020 pundit and co-commentator for ITV.

After a severe ankle knack aged just 17 ruled her out of a playing career she went to college to study European Studies, Spanish and Sociology at Liverpool Hope College and later achieved a Masters degree in Intelligence and International Affairs. She was actually training to be a spy! They say she can still tell if anyone is lying thanks to that education, which must make being in a TV studio interesting.

She has been coaching in one capacity or another since 2001, starting out in America with the spectacularly named Long Island Lady Riders for whom she was the youngest head coach in W-League history. She won national coach of the year aged just 25 before moving to Iona College and again winning national coach of the year. There followed a two-year stint as first-team assistant coach and academy director for Arsenal Ladies between 2006 and 2008. Hayes was then recruited by Chicago Red Stars, signed Megan Rapinoe and England’s Karen Carney, but got the sack in 2010.

After a spell in the technical director role at Western New York Flash and as a consultant for Washington Freedom, she returned to the UK and wondered if football was for her after all. All the admiration and awards seemed to count for nothing. It must have been dispiriting. She went into the family business of Money Exchange. But after seeing the USA, Canada and Japanese sides at the London Olympics finishing in the medal positions and realising that she’d already coached 40 of them, it made her realise her calling was not in writing software and websites but in football.

This is when she took up the managerial role at Chelsea in 2012.

Despite only being nine years ago, these were very different days for Chelsea Women. It was so poorly funded they had to do all their own washing. But with an intense focus and dedication she set about transforming the team into one of Europe’s finest, developing a close relationship with Roman Abramovich in the process and securing far better financial investment from the Russian. But make no mistake: this was all achieved by her own focus and strength of will. It would not have happened without her.

In the subsequent years she has fought tooth and nail to get women’s football taken seriously. In 2016 this led to an MBE for services to the game.

She’s now led Chelsea to four league titles, two FA Cups and two League Cups. This year, for the first time, she took the Blues to the Champions League final.

Players speak so highly of her. She helped Fran Kirkby get through a severe depression and Katie Chapman, who played under her at Arsenal, Chicago and Chelsea, says she puts emphasis on personality as well as talent by searching for “a good person who you can trust and is going to fight for you”.

Why the love?
As a person, with a fantastic Camden accent, she seems thoroughly down to earth without any side to her. Seemingly very self-sufficient, her journey to the peak of the game has given her some inner steel and a deep knowledge from the grassroots upwards. With the strong support of her family, especially her father, she has climbed to the top of the game through sheer talent and force of personality. Chelsea were an amateur club when she arrived; to transform them so completely and take them to a Champions League final in nine years is nothing short of remarkable. It is one of the great football stories of this era.

It’s clear she inspires loyalty and affection in her staff and has had a talent to manage people on a personal as well as a professional level since she was in her early 20s.

She has worked on 5 Live a few times as a co-comm and as a guest. The impression you get is of someone who is totally across every aspect of the game, very self-confident and able to back up everything she says with real-world examples and not just general impressions. I have yet to hear anyone who is better at tactical dissection.

The Poland v Slovakia game was some people’s first introduction to her and safe to say, she blew many away. For everyone used to a less forensic and more, shall we say, impressionistic – some might say thought-free – approach to co-commentary, it was as though we”d been taken from junior school to university. It really felt like we’d stepped up about ten levels. In contrast to the more typical offerings this was a harsh lesson. It showed what co-commentary could be, perhaps should be.

Here was a proper coach, using the language of a coach, to help us understand what was going on. She explained in detail how to beat a low block, for example. I’ve never heard anyone do that before or during a game. It wasn’t aloof or drowned in jargon, it just made sense. This prompted Ian Wright’s comment: “Just listen to Emma Hayes feeding us insight and knowledge.”

She explained why Robert Lewandowski should cover the pivot after Poland had advanced their midfield forward ten yards. There was talk about how to dominate the transitions of play. Her quick mind impresses so much because football happens at pace and you have to be able to see changes, understand how they will affect play and call it out all in a few moments. This was clearly no problem for Emma – it seemed to come as second nature.

Why isn’t hers the default standard for co-commentary? Because here’s the thing: the football tourist who only watches occasionally, or is not a football disciple, doesn’t care who does the pundit or co-comms job. They have no demands. But those who are keen students of the game really do. To have a coach breaking down play as it happens in more technical terms is exactly what these punters want. So why not give your best customers what they want? TV producers have done a better job of weeding out most of the worst say-what-you-see types, but that shouldn’t be the end of driving standards up. If you’re just going to have someone there to make jokes – or worse, banter – then employ a comedian, not an ex-player.

There are football workers such as Don Hutchinson and Danny Higginbotham who are more detailed. Like Hayes, they’re quick to spot what is going on and break it down, in doing so explaining the underlying dynamic to the action. You can’t fake knowledge like this and it is very uplifting for us to hear. It feels like we’re being treated as interested, educated adults and not lager-soaked idiots who are nodding off on the sofa. Not that nodding off on the sofa is a bad lifestyle choice, but you don’t want a whole branch of the broadcast industry predicated on what it is thought your dysfunctional synapses will tolerate after eight pints.

If TV and radio producers can’t see why it is better to play to your dedicated fans rather than the general crowd, think of it this way. It’s like if you ran a pub and gave priority to servicing the once-a-year Christmas drinkers rather than looking after those who are there most days of the year.

In this way, Emma’s presence in football media is both important and revolutionary. This is the way forward, the new standard, and if those with power to hire and fire can’t see that then they must be blind. I hope she wants to do more media work and if she does, is offered as much as possible. It is a shortcut to having a more intelligent, perceptive show.

What the people say
It takes time for the general population to get with the programme and realise that times have changed, so I didn’t expect there to be avalanche in the postbag this week, but even so there was plenty of praise, starting with a 4_4_haiku:

‘She’s forgotten more about football than 98% of men have collectively ever known.’

‘She has said more insightful, interesting things about the match I’m watching than any previous co-commentator I can recall. No cliches, no hesitation, no bantz. Brilliant analysis for anyone who loves the game of football more than they dislike women or change.’

‘Explains tactical adjustments as they happen and highlights why things happen during a game. Great analyst.’

She is one of the greatest managers in the Women’s game, truly incredible manager and human being, to hear her voice on the ITV commentary team for the Euros has been truly refreshing.

‘She also made me realise that I try to tune out the co-comms in most games because it rarely adds anything – I felt like I sat up a bit straighter on the sofa when she was talking!’

‘Clever and able to convey complex concepts to idiots (me). She’s like having TMS on but for football.’

‘An incredible football brain, a brilliant motivator and most importantly, a great person. Deserves to break the glass ceiling into the men’s game.’

I learned more from her in first 10 minutes of Poland/Slovakia game than from all other co-comms in rest of the games. As well as her tactical knowledge, she’s very human and empathetic. Love listening to her on radio where pundits usually get more time.

‘No-one should have to tolerate listening to McManaman ever again whilst we have the expertise and know-how of this season’s most successful English manager.’

‘I love her authenticity.  She’s not trying for the cameras and most importantly her analysis is excellent, she can read the fluidity of games so well.’

‘Makes most of the other co-comms look amateur by comparison. Gives the viewer credit that we can see the pictures and explains what the thinking behind the moves/management are, the stuff we may not know. BT Sport pay attention, please!’

Emma Hayes provided more insight into her first 30 seconds then most pundits have done in years. Not only is she a great manager but she is now also a great pundit, who truly knows her stuff!

Swearing as we know, is both big and clever:

On the weirdness of only men being involved in men’s football:

Future days
Recently I suggested that if Daniel Levy had his act together – which recent events prove once again he doesn’t – he’d have approached her to take over at Spurs. She would probably reject it, but as he scrambles around Europe desperate to get someone/anyone to work under his increasingly pathetic, rather toxic regime, the idea that he wouldn’t or shouldn’t talk to her is nonsense.

We know men’s football is a lot less progressive and forward thinking than women’s. To hear Emma talk about how much work the game has to do with increasing diversity and making all feel as though football is a place where they can be who they are is to hear someone who seems not just on another page to some of the male dinosaurs, but reading an entirely different book.

The fact she’s had to overcome so much so far to get women’s football to be taken seriously, and has done so in personal adversity while losing a twin during pregnancy, speaks to someone made of stern stuff and who should be listened to far more than the usual toadies, lick spittles and blowhards.

I hope that TV producers have heard her work and send memos to all other co-comms to remind them this is the standard that is expected and if you can’t meet it, you’re out.

Hayes is one of this country’s finest coaches and finest media workers. She continues to set new standards and in doing so is making all our lives better.