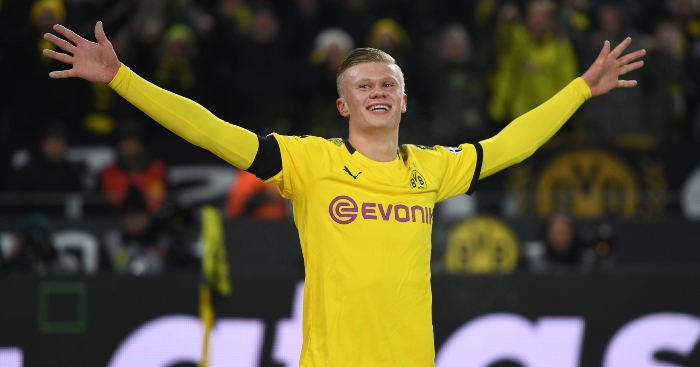 Who’s this then?
Erling Braut Haaland turned 20 in July, was born in Leeds and is a 6ft 4ins striker who plays for Borussia Dortmund. He is, by some distance, the most exciting and prolific striker in European football today.

His father was, as most know, Alf-Inge Haaland who forged a career in the English game with Nottingham Forest, Leeds and Manchester City.

Erling’s career began a mere five years ago in the Norwegian third division with Byrne FK2. His 18 goals in 14 games saw him promoted to Byrne’s first team in 2016. However, he failed to score in 16 games. Even so, his impressive form previously had attracted attention and Ole Gunnar Solskjaer took him to Molde in 2017.

After four games and a couple of goals in Molde’s second team, he was promoted to the first team at just 17. However, his 2017 season saw him net just four times in 20 games, then 16 in 30 the following campaign, winning the ‘Breakthrough Of The Year’ award. He’d scored four goals against SK Brann within the 21 minutes, the sort of goal-hungry performance that was already making waves all across European football.

Red Bull Salzburg signed him in 2018 and in his first full season he went bonkers, scoring 28 in 22 games, including four hat-tricks. Then he scored in five consecutive Champions League games, ending up with eight goals in six, breaking all sorts of records along the way.

The fact he was so dominant at this level meant he was wanted by every club in Europe with a fat chequebook (well they still have faxes so they must still have chequebooks). Sensibly he went to Dortmund for £20million which already looks like a massive bargain because he’s scored a shocking 33 in 32 games. In his last 57 games he’s netted 62 times. He is in excess of a goal per game with this season’s 17 in 14, which is starting to look like a habit rather than an exception.

But it didn’t stop there. Having made his international debut last year, in 2020 he’d already got six to his name in five games, coming hot on the heels of his successful U19 and U20 performances which saw him score nine in a 12-0 win over Honduras.

His performances are so dominant, no matter who the opposition is. Has there ever been a better 20-year old goalscorer at this level?

He is simply an incredible performer who never seems to miss.

Why the love?
There is something quite unearthly about the lad. There’s a touch of Deep Space Nine about him. You wouldn’t be surprised to see him in Quark’s Bar as a shapeshifter who hasn’t quite got his human form right yet.

This isn’t a criticism in the slightest, it adds to his exoticism and mystery, to his ‘otherness’, because not only doesn’t he look or play like any other footballer, he isn’t like any footballer I have ever seen in 50 years.

We must bear in mind that he’s only 20 and as such is surely still only learning the game (though he seems to be fully-formed and operating at a high setting). However, he displays the fearlessness of youth that we must hope he never loses. If you watch how he plays the game, he rarely takes a second touch, nor does he waste time in getting his strike off. Hit it hard and hit it early seems to be his motto.

He is already master of being the first to a through ball and a shot being his first touch, and also of positioning himself to score a tap-in. Time and again he does this. It looks simple but if you slow down clips of his goals you’ll see him constantly looking at the space he’s got to run into and in doing so, judging the timing of the run perfectly. He is making a tricky art look easy. Even the six yard tap-ins are the product of perfect timing and positioning.

And yet for a ruthless prolific striker, he isn’t a rhythmic machine of a player. He isn’t elegant in the conventional sense. Rather he’s messy, with arms and legs everywhere. He doesn’t look fast but he is, and when you add height and strength into the mix, no-one can get near the boy. Time and again he is a metre ahead of the defender when the ball is played through his mix of anticipation, pace and timing.

While he can come in off either side, he tends to play within the width of the goalposts to make his play direct and deadly.

With the huge goal tally has come defensive fear. It’s clear that opponents don’t know whether to stand off or get close. They can’t beat him in a race or for strength and they can’t rely on him missing any half-opportunity presented to him. He’s a nightmare and as yet, no-one has worked out how to deal with him. In a recent game he delivered a second-half four-goal rout of Hertha Berlin scored in 32 minutes. It all looked ridiculously easy in a men versus boys sort of way. Yet he’s all but a boy himself

However, he’s currently out until January with a hamstring injury and it is to be fervently hoped that this isn’t going to be a recurring injury. People who are built in an extraordinary way need to have their fitness looked after in special ways. His speed and size and power must be some load to carry.

He had some criticism in the media for being ‘uncooperative’ during interviews, all of which sounds like the media’s massive and limitless sense of its own exceptionalism at play. I am told there are journalists and TV people who think they’re as important a part of the game as the players, and that players widely mock those people. His supposed ‘crime’ is merely to answer the usual questions with a single statement rather than uttering four sentences of cliches and empty garbage. Contrary to what TV people might believe, this is actually a good thing.

He often looks bemused at the vacuity and pointlessness of the post-game interviews that he is presumably obliged to do. He’s also replying in a second language which is inevitably going to limit your vocabulary. I wish more would strike the same attitude as he does, it might put an end to the “how do you feel?” culture of interviews and the obligation to stand in front of a wall of logos being asked to explain something that either needs no words or is impossible to answer properly in the allotted 30 seconds when English isn’t your mother tongue.

I look forward to him telling some vacuous talking heads to feck right off with their empty questions. We need more punks on football TV and less obedient corporate nodding donkeys.

‘I refuse to support any player who reminds me of advancing age. He’s ridiculously good though.’

‘A couple of years ago, he played for Molde against my Irish team, UCD AFC, in the under 19 / youth Champions League. He played in the away leg and scored in the peno shootout. This has gone into legend – along with the legend that Socrates played for UCD (false).’

‘I wrote in to F365 that he looks like the Ronaldo statue.’

One of the truly generational talents presently playing top level football, so good he’ll fit in any team from FC Barcelona to AFC Flyde. Excellent striker whom I hope to watch grow and attain the best of all his abilities guarantees. A witty lad too. Love him.

‘It’s too soon for love. It’s mainly lust at the minute.’

‘He might be all that, but he’s yet to do it on a winter’s night at Motherwell.’

‘I ponder the fact that he is as qualified to play cricket for Yorkshire as Geoffrey Boycott and Fred Trueman quite frequently.’

Has a particularly bemused, innocent smile. And is the same size and nearly the same speed as Usain Bolt.
Looks and is built like (and about half a foot taller than) my younger cousin.
Will be the best player in the world some day.

Three great moments
His four goals against Hertha Berlin were typical. Two scored with a first touch, one with two touches and one a solo effort with defenders bouncing off him:

His ability to latch onto a through ball first and hit it early is second to none:

How often do you see anyone score (nine) goals in a game?

What now?
He’s contracted to Dortmund until 2024. Whether he will see that out or not remains open to debate. His value in the somewhat depressed transfer market is currently put at around £90million but it would surprise no-one if he was sold for a lot more than that. If he stays reliably fit, he is a guarantee of a huge amount of goals. In today’s game, with defensive talents in very short supply and physicality all but outlawed, he’s free to rampage through any defence at will. Who is really going to stop him for long?

Already this season he’s got six Champions League goals in four games. Absolutely nothing fazes him. He seems to have ice in his veins and never a flicker of doubt in front of goal.

With Mino Raiola as his agent, there seems to be an inevitability around his transfer to one of richest clubs such as Manchester United or Barcelona. It is to be hoped that if it happens, they do not drag him down to their level. It’d be nice to see him at Dortmund for three or four years, but you’d fancy Bayern Munich are eyeing him up in a couple of years as a natural replacement for Robert Lewandowski, who is now 32 and actually has two more Bundesliga goals this season to his name.

If he continues to score at his current rate, he’s going to end up as one of the game’s best ever strikers and while he’s got a long way to go, there is no sign that this is merely a purple patch he’s going through. It seems to be his innate state.