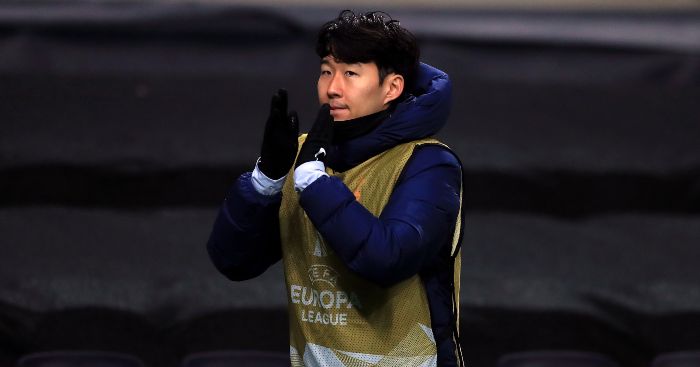 Who’s this then?
Heung-min Son is an ageless 28-year-old, 6ft striker currently playing for Tottenham Hotspur. Born in Chuncheon, Gangwon, South Korea in 1992, he’s played all his professional football in Europe, joining Hamburger’s youth team aged 16 and making his Bundesliga bow at just 18. He’d come through the youth ranks at FC Seoul and was a standout player from an early age.

He spent three years at Hamburger and although his best season only saw him score 12 times in 34 games, his overall play was so impressive Bayer Leverkusen forked out a club record €10million for his services in 2013. In his two seasons at Die Werkself, his 29 goals helped them to two successive 4th-place finishes.

At which point Daniel Levy turned up jingling the change in his pocket and licking his lips, put €30m on the table and took Sonny home, gift-wrapped as a present for Harry Kane to play with. This made the South Korean the most expensive Asian player in football history.

He has been playing for his country since breaking into German football and has racked up 89 appearances and 29 goals. Their victory in the 2018 Asian Games meant he could avoid national military service, though he still had to do basic training which he did while everyone else was having time off due to Covid-19.

At Spurs his reputation has grown and grown each season. A versatile striker, he can pretty much play anywhere. Essentially two-footed, scoring almost as many with his left as with his right and being lightning quick has made him indispensable to this season’s title challenge. His 96 goals in 246 appearances across six seasons only tell half the story because he’s also developed a superb partnership with Kane, with 32 assists in the Premier League alone.

“I don’t have a favourite position. I’ll be anywhere and always on the throttle,” he says of his own approach; that’s a pretty good summation of his game.

This season seems set to be his most successful yet as the club has a tilt at the title. He now has 13 strikes in 17 games, the latest a breathtaking curling 35-yarder.

Rarely injured, he’s played over 40 games in each of his seasons in north London.

Why the love?
There are three basic reasons we all love Sonny. First, he runs around a lot and just never seems to get tired. No-one could ever accuse him of not putting in the hard yards. If you want someone to run down a ball or relentlessly press the opposition defence, he’s the man for the job. And he now has a manager who demands everyone, no matter where they play, have a lot of miles on the clock at the end of every game.

Secondly, he is unselfish, working as a wholly committed team player, albeit one who is capable of incredible individual skill.

And third, everyone loves a low maintenance player who just turns up, is really good and then goes home again. Aside from the story about understandably avoiding military service, do we know anything at all about Sonny? And in today’s febrile football media where anything a player does, from walking down the street to eating actual food is deemed newsworthy, at least by the desperate page fillers of the vomitorium-dwelling press, that’s quite remarkable. The proverbial manager’s dream player, he seems 100 percent dedicated to his job. Probably the player you’d least expect to be caught breaking social distancing rules at a sex party.

Oh and he’s great at football, too. I forgot about that! His most successful modus operandi is, in essence, to time runs perfectly with speed and incision and strike the ball with one or two touches. If you watch reels of his goals, time and again, he’s running in behind a defence onto a through ball and absolutely no-one can ever catch him. Couple that with fierce shooting accuracy and you’ve got the perfect striker.

He’s now been at Spurs for six years – time flies, huh – and yet, at least until relatively recently, he’s felt like one of those players who isn’t high profile, flies under the radar and little fuss is made of. Certainly, far worse-performing players get far more attention, and that’s probably how he likes it.

And it’s no wonder he’s a favourite with fans when he won Premier League Goal of the Season with this amazing strike. Very few players could do this.

There’s no sense that he’s one of those itchy players who is always angling for a self-aggrandising transfer to earn ever more unspendable amounts of cash. He feels so reliable and solid as a character.

But it is the wide range of his skill that impresses. He can be a solo performer who can rescue or win a game all on his own by taking the ball and just running with it. He can play wide on either side and be a provider to Kane. He can play as a 10. He can be a close-control trickster who can wriggle out of a tight spot as an advanced midfielder. He can play on the shoulder and use his pace to get in behind, or he can simply leather the living feck out of the ball and score from almost any distance. With Kane often dropping deep, Sonny is the perfect versatile player to get the most out of his strike partner and gave him so many options.

What the people say
You’d have to actively dislike football as a sport not to be thrilled by Son’s performances in recent years. Clearly he’s got a lot of fans. We start, as ever with a 4_4_haiku:

Always full throttle
Pressing that suffocates you
Choking on his dust

‘Dynamic, hard-working, effective, scores and assists all the time…and seems like a really nice guy (who enjoys a little foray into red cards, which is fine by me). Might be my favourite PL player at the moment.’

‘Came to Spurs a relative unknown, endured an up and down first season yet you could see his qualities. He just gets better and better and I don’t think UK-based supporters appreciate how big he is in South Korea, and that’s because he stays humble and let’s his football to the talking.’

‘He’s brilliant. Before Jose came in, I thought the wheels were coming off at Spurs and he might be up for grabs. He’s the most Klopp player I have seen who doesn’t play for Liverpool. Found myself going full Gollum, muttering ‘I wants him. I wants him for my own.”

Every transfer window I wait for a mega bid to come in for him and to my relief, none are incoming, he is not even subject to the rumour mill. Must be to do with how happy he is at Spurs and not having a blood sucking agent, take note Paul Pogba

‘Previously the scorer of many blinders that were brilliant but not decisive. He has changed that this season with loads of key goals so far…especially impressive given how much less time he has on the ball in JM’s system.’

‘As a Burnley fan his wonder goal was very frustrating to watch but undeniable.’

‘When we signed him a bitter West Ham fan gleefully texted me, “he’s too weak and wishy washy for the Premiership”. I smile every time I think of that.’

‘The type of player everyone wants at their club. From a human side to the on the pitch stuff, it’s hard to find a single fault. He’s a complete enigma. He’s just got better and better but you struggle to find a point as to when he actually was recognised as one of the best.’

‘It’s not just the amount of goals he scores, it’s the sheer quality. Look at any highlight reel, there’s hardly any tap-ins, scuffed shots or penalties/free kicks. His finishing is astonishing and the number of Goal of the Month contenders is off the charts.’

Plus you watch him amd he can turn a defence into an attack. Its hard to fathom out why he’s so good but he is. He just knows when to run, when to pass, his control is immaculate and his shooting is world class. Unselfish but selfish. He just knows what to do and when to do it

‘I don’t love that he plays for Spurs and not United, but I do love his attitude, his energy and his work rate. He’s Park Ji-Sung with flair.’

‘Some players when they score radiate anger, relief or passion. When Son scores he radiates joy and happiness. Pace, two good feet, movement, skill and deceptive resilience make him a world class player.’

In his pomp he’s breaktaking and far too frequently he makes me squeal outloud with delight (Burnley, Arsenal this weekend). Frankly we should resign Kevin Wimmer just to make him happy. I. Love. Him.

‘I once saw a Spurs sticker they’d left in an away end that just said ‘Rhythm is a dancer, Heung-min Son’s the answer’. Feels about right, to me.’

‘He’s got a bit of dickhead in him. Not a criticism as every player needs that. The tackle on Andre Gomes, when he kicked up at Rudiger. There’s a bit of bite there.’

‘Like Mane for Liverpool, Son is the player that would be missed the most if he left. People look at Kane but the team is more dependent on Son.’

a perfect human in every respect

Three great moments
Just the four for our man and all pretty much the same goal each time. It’s all about speed, timing and deadly finishing:

Fantastic positioning for this header:

His red cards show he’s got a bit of bite in him:

What now?
It seems as though he is on the verge of extending his deal and Spurs will certainly want to tie him down for a few more years given how he and Kane are working together as one of the killer partnerships in the league. He is a massive star in South Korea and as such a hugely bankable asset for Spurs. Their purchase of him almost six years ago must rate as one of the most shrewd of recent years, both in terms of football and finances.

It is impossible to see him losing any degree of fitness in the coming four of five years as he’s one of those people who seems to have a low body fat percentage built into his DNA and thus is destined to always be really fit.