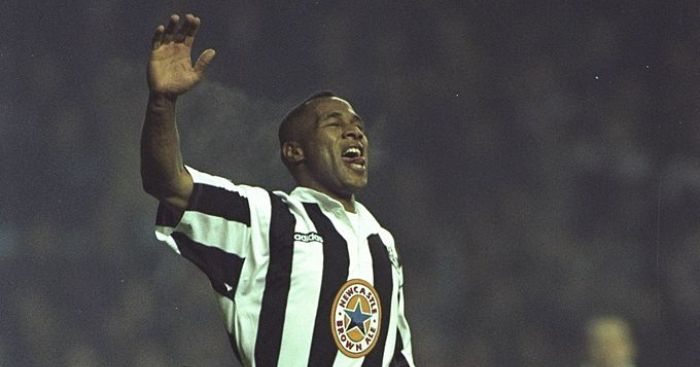 Who’s this then?
Now 53 years of age and looking at least 10 years younger, Les was one of the finest English strikers of his generation. He played for Hayes, Brentford, Besiktas, Queens Park Rangers, Newcastle, Tottenham, West Ham, Leicester, Bolton, Reading and finished on Watford’s books just before turning 40. He’d played 523 games and scored 215 goals in total.

He was PFA Player of the Year in 1995/96 after an excellent season with Newcastle, scoring 29 in 44. He played for England 17 times, making his debut in February 1993 against San Marino, scoring the final goal in a 6-0 victory at Wembley. He was part of the Euro 96 and 1998 FIFA World Cup squads and scored five goals for his country.

A dapper, rather aristocratic gent who was loved by all the fans of clubs he played for. He had cool, he had style, he had poise and grace and wonderful thighs. Plus, he could seriously batter you if you wanted to get physical with him. Built for power, he also was explosively quick, capable of accelerating away from any defender, especially in his QPR and Newcastle days.

He also featured, albeit vicariously, in this classic documentary:

I bet even now rarely a day goes by without someone shouting “Hit Les!” at him.

Many believe he and Dennis Wise were responsible for wrecking the Blue Peter garden in 1983 as they lived nearby but, in fact, this is just an urban myth which had gas put into it by Les making a joke about it.

Why the love?
Excitingly physical, he was a tall (while only 5′ 11″ he appeared to be 6 and a half), imperious figure with a head that looked carved out of granite and a prodigious leap. He was a quintessential No. 9 in an era where having a big lad up top was the go-to tactic for most English clubs.

To dwell on his heading ability for a moment, while CR7 rightly amazes with his ability to jump high, hang and head, he is but a Sir Les imitator. In his QPR and Newcastle days it was not uncommon to see a cross come in, Les to go up for it, be head and shoulders above the defender, pause, light a fag, take a sip of tea, peddling thin air like it was his own personal unicycle, until the ball arrived to be nutted with power into the net. I kid you not. He defied the laws of gravity.

He was also from the school of striking which said that when you hit a ball it should stay hit; he scored some absolute belters. In so many ways he was exactly what you want a striker to be like: big, strong, great at heading, speedy and with a thunderbolt on him. He had it all.

His QPR and Newcastle days were where his legend was forged and why those fans still feel so fondly towards him. After 50 goals in 84 games it was remarkable that Newcastle chose to sell him to generate cash. A six-season spell at Spurs was regularly interrupted by injury but his year at Leicester ended with him picking up their Player of the Year.

But there is something extra special about him that isn’t just to do with how he played football. Not for nothing is he known as Sir Les. He has an air about him which somehow, almost by psychic osmosis, commands respect. He exudes trust and honesty, as well as bonhomie and good vibes. One of those people who, when you see him, just makes you smile.

What the people love
Les is a man that is easy to like and has brought us all much pleasure over the years, so I wasn’t surprised to get so many lovely comments about him. He seems loved by all and sundry.

‘Sir Les…great sport. Humble, grateful for what fell his way in the game. Always approachable. Villa Park, early in the ’92/93 season. Dalian Atkinson played a blinder and near the end rammed in the crucial goal for Villa. Sir Les stood on the centre circle, applauding as Dalian ran back – then stretched out a congratulatory hand. Loved at every club. Scored Newcastle’s winner once at QPR and the Rangers fans wouldn’t let him off the pitch till he’d gone over to acknowledge their acclaim. At the same time the Newcastle fans were lauding him at the other end. Never forgot where he came from. If every pro footballer was like Les Ferdinand… In my Favourite Players’ XI. Scorer of great goals – like Mark Hughes. Net busters!” – Pat Murphy, journalist and broadcaster.

‘I have absolutely nothing personal against Les. He was a great player, I’m sure he’s a nice man and I’d have loved him to have played for Everton. That said, most Everton fans hated him because he always scored against us! 16 goals in 19 games against us!’

‘I swear he had a grappling hook in his fringe. He seemed to hang in the air for ages for headers.’

Watched him play for Spurs and England then became his agent then friend 15+ years ago. I can safely say in any crisis, whatever the circumstance, wherever I could be in the world, if I called Les he would be there. https://t.co/OLpCNTy5NE

‘A bloody wonderful force of nature.’

‘One of the few people in football who has moved clubs regularly and it seems like fans of all those clubs still hold him in respect. A true gentleman but a warrior on the pitch. Alan Shearer rated him his favourite striking partner – there’s no higher accolade than that!’

‘He had a head like a traction engine. I’m sure he could head the ball harder than most could kick it.’

Met him via @MellyChaps and honestly couldn’t believe he was such a lovely man. Thought it was just politeness but worked out over many meetings since he really is that lovely. I guess I shouldn’t doubt her taste really. I learned that!! She doesn’t do assholes.

‘Forget the 2000’s England golden generation. For strikers I don’t think England ever had it better than the mid – late 90’s. Shearer, Cole, Ferdinand, Sheringham, Sutton, Wright, Fowler, Owen. Every one of them better than Harry Kane.’

‘My all-time QPR hero. Went to England v Poland at Wembley and when he scored I whipped off my jumper to show my QPR kit. Would be worth £50m plus today.’

‘One of the few people in football who has moved clubs regularly and it seems like fans of all those clubs still hold him in respect. A true gentleman but a warrior on the pitch. Alan Shearer rated him his favourite striking partner – there’s no higher accolade than that!’

‘Saw him at a black tie dinner. Couldn’t believe his height, yet I rate him number one in the air in Premier League history. So disappointing the entertainers blew a 12-point lead; he deserved a medal.’

Sir Les is the only person I have ever played with or seen and or probabaly ever in the history golf at the Old Course, St Andrews, too thin two wedge shots on the first hole, go in the burn, come out of the burn and then make par, all with a smile on his face. Top man. pic.twitter.com/vjBxiXPVGG

‘If Les was playing now, he’d be England’s number 9. Incredibly strong, surprisingly quick for a stocky lad, the best I’ve seen in the air, great finisher. I believe at his best he was as good as Shearer. I can pay no higher compliment.’

‘Seen an interview with him where he said his relationship with Keegan was never the same. Disgusting of us to sell him when we did. And we tried to get him back when shearer got injured. Les obviously told us to get stuffed, but also says he regrets that and should have swallowed his pride and stayed at Newcastle. Wonderful player, absolutely adored him as a kid.’

‘I remember going home and showing mum a signed Spurs programme after a match. The picture was of Les topless, saying “even I can’t get my hands on the new kit”. She said ‘so you met Les then?’. I had to tell her no, I got Neil Sullivan to sign it!’

‘One of the worst decisions the Toon made was letting him leave. Gave up his number 9 shirt for Big Al and didn’t complain one bit. Absolute legend and true gent.’

Three great moments
Look at his speed and power. Just no stopping him.

2:09 is a classic Sir Les header for QPR. Up he goes, waits mid-air for a second and batters a header in.

What now?
Sir Les is now director of football at QPR and absolutely looks the part. It’s a role that would seem to suit his talents very well, combining his natural charm and communication skills with his footballing experience. I imagine he is a very inspirational figure to work with. Interesting that he’s never gone down the managerial route. Perhaps he’s just too nice to be beastly to players. But whatever job he’s doing he will always be the one, the only, Sir Les.