Home Johnny Nic Neuer: The quadopus who changed how the game was played 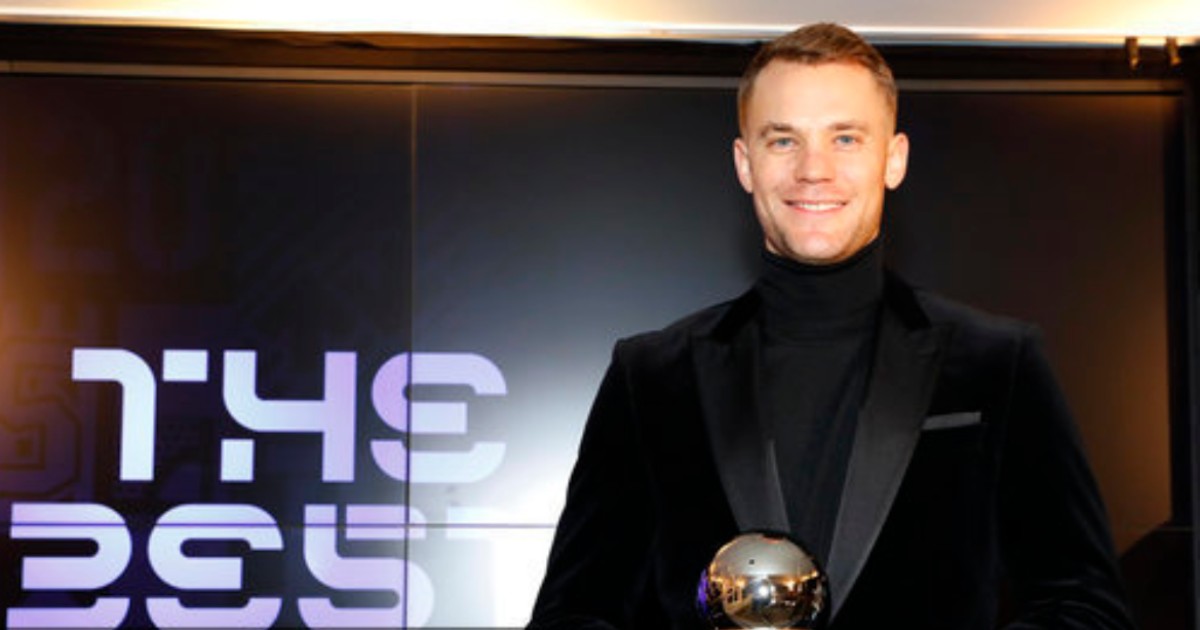 Not many footballers can honestly claim to have transformed an entire position with their playing style. Manuel Neuer was and is different.

Who’s this then?
Manuel Peter Neuer is a 34-year-old goalkeeper who stands 6ft 4ins tall and was born in Gelsenkirchen, in what was then West Germany. Widely regarded as one of, if not the very best goalkeepers of the modern age, he redefined the role into that of a sweeper-keeper, capable of distributing the ball as well as any outfield player.

He has only played for two clubs so far in his 17-year career: Schalke 04 and of course the Bayern Munich machine. Coming through the youth ranks of Die Königsblauen, he debuted in the first team in 2006 aged just 20, playing 203 games for them across five seasons. With Schalke he won the DFB-Pokal in 2011 and the DFL-Ligapokal in 2005.

When his contract expired he was signed by Bayern, whose supporters were initially hostile towards him but after a meeting between fan representatives and the club, they agreed to be nice towards him, which was lovely of them.

In 2014 he was third-placed in the Ballon d’Or behind Those Two, in itself a remarkable achievement for a keeper. The most recent to be nominated was Oliver Kahn, who had been the Bayern keeper until 2008.

At Bayern he has hoovered up a lot of trophies including eight Bundesliga titles, five DFB-Pokals, five DFL-Supercups, two Champions Leagues, two UEFA Super Cups and a FIFA Club World Cup in 2013.

He made his international debut in 2009 and won the 2014 World Cup. He’s now made 96 appearances for Die Mannschaft, 415 for Bayern and 647 club appearances in total.

He has been voted World’s Best Goalkeeper four times. In 2014, he was chosen as European and world Athlete of the Year. Impressive.

Why the love?
A great goalkeeper is an exotic beast. There are ten outfield players plus substitutes but only one goalie. This makes them known to all and the focus of attention. The fact there is no place to hide for the person between the sticks means that almost by default they are an unusual bird.

Manuel fits that bill in that he has moments in a game of zen-like calm. There’s no chest-beating and yelping like a stuck pig; quite the opposite. This gives him a huge aura and an unnerving presence. So calm and cool does he appear even when under pressure that it feels intimidating to strikers. It seems like he knows something that they don’t.

Over here, many first saw him in a game for Schalke against Manchester United, which though they lost, saw him make some great saves.

It is still quite shocking to see a keeper take the ball out of his box and run upfield with it, let alone doing a Cruyff turn in his own box. But that’s Manuel’s gig. Some find this arrogant but most of us bloody love it. This is why we watch football, not for the percentage ball but for the hard stuff done brilliantly. And if he royally cocks it up, that’s even more fun.

He’s got that massive star leap in his locker as well, which must be bloody scary if he comes flying through the air at you with legs and arms extended like a nuclear-powered octopus, or possibly a quadopus.

Maybe he has always had the air of a man who finds the game a little too easy and thus has to make it harder for himself. Some of his more outrageous saves have arguably been as a result of being out of position. But then, are you really out of position if you can still make the save? Doesn’t that actually make you the boss? Yes, he does occasionally make terrible errors, but you’d trade those every day of the week for all the brilliance. He is proof of how being conservative does not pay off.

After watching a lot of him, in terms of shot-stopping I think where he’s a difference maker is in his super sharp reactions for close-range strikes. He seems able to twitch his arms out in a split second but keep them strong enough to deflect snap shots. It doesn’t always look athletic or smooth or cat-like, but he is brilliant at it. Some of the saves on this reel are out of this world and watch how firm his hands are in saving penalties. It’s amazing stuff and totally out of the ordinary. This is a very, very special player.

But it is his work as a sweeper-keeper that thrills. The Cruyff turns in the box are just the start of it. He can lay off a pass from one teammate to another with the outside of his foot. He can throw it well over the halfway line directly to a player. He takes throw-ins while leaving the goal entirely exposed. He might come racing 15 metres out of his area to meet a breakaway striker, or he might fly out the box like a German Superman, or an exocet missile, arms by his side, to head a ball clear. He’ll distribute a ball from behind his own back or he’ll take a penalty if needs be.

While other keepers now do these things, it is pretty much in homage to what has always been how Manuel played the game. He may not have been the first to play as though he was an outfield player but he certainly popularised it and made it almost a default for the modern day keeper to at least try and match. Any keeper who just wants to be a keeper and boots it downfield is now pretty much outlawed at the higher levels of the game. That is largely down to our man.

And while in a one-on-one he has that zen calm, if his teammates need a bollocking he’s going to give it to them, screaming into their faces. And after a victory, the mask of tranquility drops. He’s not a machine, he just plays football like he is.

Four great moments
A Cruyff turn in front of your own goal? Oh alright, then. I need some excitement:

This save from CR7 is a classic Neuer hard hand:

A long-range power strike is swatted away like a fly:

The boy can throw it:

What the people say
There’s no doubt that Neurer has made a big impression in his career. How could he not have? I suppose those of us who are excited by the eccentric, the different and the maverick were always going to embrace the style and distinctive behaviour of this unique keeper. He might not be a mainstream favourite but then, if you’re in the middle of the road, you just get run over. All the fun happens in the gutters and at the edges.  We start, as ever, with a 4_4_haiku:

Charging cavalier
Defined by revolution
Not the odd mistake

‘Capable of making other worldly saves, and then Taibi-esque gaffes. Wonder how he’d be viewed if he weren’t part of such a dominant side as Bayern, but then the sake could be said of Buffon, Schmeichel and Khan as well, I guess. Top players are, after all, often part of top sides.’

‘Many forget just how key he was in taking Schalke 04 to the Champions League Semi Finals back in 10/11, that season they won the DFB Pokal and just managed to stay up, Manuel playing a key role throughout.’

‘I still believe his palms are made of steel.’

‘Still kind of think of him as a young keeper, but that’s just me getting old. You wonder how many lesser keepers started shitting themselves that the boss would want them to play as a sweeper keeper like that incredible German fella.’

His name has become a generic term in our house: any time a keeper leaves his area to kick or head the ball, one of us has to shout “Neuer”. That’s it. He will always be the shorthand for goalkeepers doing anything other than goalkeeping

‘I guess he’s a high-risk high reward keeper. He makes mistakes, but some of the stuff he does is incredibly entertaining.’

‘I worked as a doorman for years and I always got the impression Neuer was the sort of fella who’d say ” Do you know who I am? ” if the doors were shut.’

‘Phenomenal keeper but you also need a bit of luck in life. Enke dies then Adler suffers an injury. 3rd choice Neuer is elevated to  #1 in South Africa. Lamps scores the goal of his life against Neuer & it’s disallowed! No more moaning about the ‘66 final please, Germany!’

‘Zdenek Zeman championed the concept of sweeper-keeper at Serie A upstarts Foggia back in the early 90s, and everyone thought he was mad. Manuel Neuer must be Zdenek Zeman’s wet dream.’

15 years ago a goalkeeper simply had to stop the ball from going in the goal. Now, with thanks to Neuer, keepers need to be quick, great with their feet, have a mind like an outfield player and make football more exciting to watch.

‘I can’t believe he doesn’t get more sh*t for scooping out the ball from his net on at least 2 separate occasions. Maradona, and to a lesser extent Henry had their careers tarnished by their handball indiscretions. Neuer knew exactly what he was doing, yet it’s never mentioned.’

‘He’s got to be the best in the world. Can’t see a weakness in his game. He’s probably got the skill of an outfield player too. I’ve noticed he can play a long ball out to the flanks with either foot with pin point accuracy. He’s a machine.’

What the future holds
It seems likely, with Bayern already seven points clear at the top of the Bundesliga, that he will pick up another title this season. Last year, he extended his contract at Bayern until 2023 by which time he’ll be 37. There’s a very good chance of playing in the 2022 World Cup whenever that takes place, which would be a good way to draw a line under his career, especially if Germany win it.

That makes the coming couple of years crucial. If he keeps his form, then who knows, he may play on until he’s 40. Perhaps he will return to Schalke, currently due for relegation (after being managed by David Wagner and now Christian Gross), where it all started, to wrap up his career.

Whenever that time comes he will have a phenomenal time in football to look back upon. Not many can say they changed the way their role on a football field was played, but that will be his lasting legacy. Prost, Manuel!