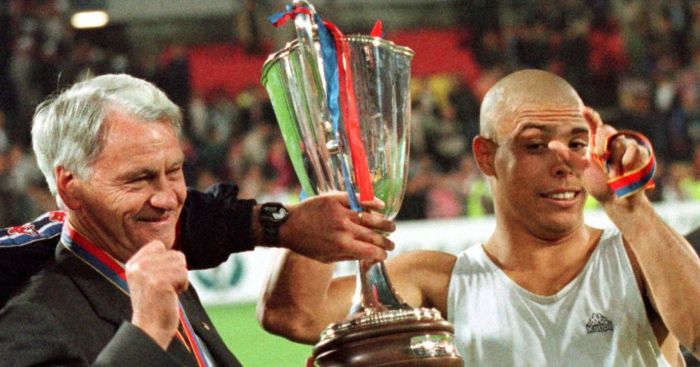 In a new series Johnny celebrates the people and things in football that we all love. We start with the glorious Ronaldo.

Who’s this then?
Ronaldo Luís Nazário de Lima, aka the Real Ronaldo, is a 43-year-old chap from Brazil. For a few years in the mid to late ’90s he was simply the most thrilling striker on the planet.

His career began at Brazilian club Cruzeiro in 1993 aged just 16, scoring five in a game against Bahia. Two seasons and 44 goals in 47 games later he moved to PSV Eindhoven and was a huge success with 54 goals in 57 games. This took him to Barcelona where, shockingly, he was a revelation with 47 goals in 49 games. Perhaps this was his finest season, when he redefined what it meant to be a striker.

It was only at his next club, Inter Milan, where he suffered his first real setback, missing the best part of three seasons with severe and persistent knee knack. Things improved when he moved to Real Madrid in 2002 but, in truth, while some of his performances were fantastic, his total of 104 goals in 177 games across five seasons reflects the debilitating effect those three injury-ravaged years had on him. He went to AC Milan for a couple of years but his body wouldn’t work the way it once did and injuries limited his appearances. He wound up back in Brazil at Corinthians for a last hurrah before calling it a day with 19 trophies won and an incredible 67 personal awards.

But it wasn’t all about club football; his legend was cemented by an international career that included 62 goals in 98 appearances and two World Cups. But it was their 1998 loss to France which put him at the centre of much controversy, after he had a fit before the final, was off and then on the team sheet and played as though witnessing the match from behind double glazing. All sorts of rumours swirled. Some say he was nobbled, others state he never should’ve been allowed to play. Somehow, it just made him seem even more ethereal and special. This was no ordinary man.

Why the love?
At his peak there was something elemental about how he played the game, something connected to the forces of nature, unforced and innate. To see him perform those surging runs from midfield, unstoppable as a freight train, wasn’t just thrilling but awe-inspiring. For a while he seemed elevated beyond the mortal; a myth or legend who lived in his own space and time.

To watch that trademark elastico at speed was to see one of football’s finest ever tricks, one that was more like some sort of dancing or performance art.

And yet for all this fantastical talent and physical prowess, he appeared to be an average Joe. This was no preening peacock of a man, rather he looked quite goofy, almost cartoonish in some ways. Father Ted’s Dougal named his hamster after him in 2002 he had a haircut that seemed to be based in shape upon a typical pubic triangle. This just made him all the more endearing. His was a talent that seemed utterly natural, a gift from God that was something he didn’t even have to work at. There was no sense that he had hewn these skills out of the granite of hard work and dedication. It seemed to just pour out of him.

One of the most remarkable aspects of how he played the game was that, in what was surely some kind of optical illusion, he appeared to move quicker with the ball than without it, as though possession pumped rocket fuel into his footballing tank. Despite this, he didn’t look like he was sprinting at a high pace the way some speed merchants do. In another trick of the mind, his speed made defenders appear slow rather than him particularly fast.

He was also a remarkable physical specimen who, even as a skinny teenager, couldn’t be knocked over with a wrecking ball. As he thickened out into his 20s he became the wrecking ball. This physical prowess combined with speed made him unstoppable. It wasn’t unusual to see opposition players literally bounce off him.

To see him strike a ball was a thing of wonder. He rarely seemed to hit it with anything less than full power and from any angle you like. Lionel Messi later said he “could shoot the ball better than anyone I’ve seen”.

‘He shifted boundaries, challenged convention, just as much as Messi and Cristiano Ronaldo have altered our perceptions of what a winger might be. Ronaldo, the original Ronaldo, inspired a phalanx of imitators, players we see on our screens every weekend. But he also turned the game so that it will always look just a little bit like him. More than most, he made that No. 9 his own.’

Three great moments
He was only at Barcelona for a season but this goal might just be the best he ever scored. His manager’s reaction, the lovely Bobby Robson, just perfectly expresses the wonderment at what he had just seen.

The first goal in his legendary hat-trick for Real Madrid against Manchester United was a classic unstoppable thrash from wide. Oh, the power!

And any chance to see the 1998 Brazil World Cup advert must be taken as our man plays a starring role. Hard to believe that you now pretty much have to be 30 to remember this being broadcast.

What the people love

Dance around the ball
Goalkeepers fall to worship
The phenomenon

‘The excitement before France ’98, before the days where foreign football was readily available, at the prospect of watching RONALDO. The first match v Scotland he did things from a different footballing planet. He didn’t disappoint, it was like a kid tasting sugar for the first time.’

‘Played (other worldly) football with a smile. Fought against constant injuries and illnesses with a smile now lives his life with a smile. An inspiration on and off the field.’

‘There are some footballers who give you the impression that being a footballer is a natural state of being, others are talented employees (nothing wrong with this). The first group exudes a joy that we can all relate to. Ronaldo is joy.’

Outside of all the goals, the runs, the pure creature that seems to have been invented just to be the perfect centre forward… it’s the fact that even after everything Cristiano has achieved, we still refer to him as the real Ronaldo, as if they’re not even in the same league.

‘Step overs in front of the goalie were just beautiful.’

‘His interviews in the Bobby Robson film, in sweetly stilted English, showed not just respect, but love. A man who can feel that and then express it so naturally, is a rich man indeed.’

‘The one player above all who I wish remained injury-free throughout his career. Would probably have gone down as the greatest centre forward of them all, rather than ‘just’ one of the greats.’

‘Because he played like everyone wants to be able to play. More so than anyone else in my opinion – no buggering about, no fancy danning. Just direct, incredibly skilful, fast, strong and totally brilliant. The video game centre forward.’

The story of Fabio Capello getting in an hour before him just to padlock the fridges and freezers at Real Madrid’s training ground is better than anything he ever did on a football pitch – and bloody hell was he special on the pitch.

‘I think it’s because in my mind all the goals I remember are incredible long dribbles and spectacular finishes, seemed a world away from any other player at the time.’

‘First all-time great player whose career I witnessed from start to finish. Scored 47 in 49 at 20. He was putting up Messi/CR7 #s over 20 years ago. If he played in the social media era, he would have been LeBron multiplied by two, rightly so.’

‘Because he was the best. The greatest. When he played, no matter who he was on the park with, he was the best player playing. Even in that ridiculous Madrid side he stood out. He had NO peer.’

‘One of the best players I’ve ever seen and so quick and skilful. He also played with a smile on his face and played with that joy you also see Brazilian’s play with.’

‘He perfected the double lollipop and I’ve not seen anyone get close to his technique. His performance in the UEFA Cup final for Inter v Lazio was outstanding. Oh and that hat trick at Old Trafford. Phenomenal.’

He was the first really phenomenal player I remember watching as a kid, you don’t forget the first real superstar you see that didn’t play in your league as it were.

‘Because when he was completely out of shape he was still one of the best in the world! An inspiration to fatties like myself!’

‘I don’t think anyone ever did what he did, the way he did it, at such speed. Truly phenomenal. Messi’s talents need no explanation, but he seems to do things at a more leisurely pace – somehow. Ronaldo though was quick all the time – somehow.’

‘I love him because he doesn’t feel like a human, he’s at the same level as Bowie for me – he’s perfect due to his imperfections.’

‘His haircut at the 2002 World Cup and the fact he kept bouncing back from serious injury to show his greatness, what a force of nature he was when healthy.’

‘His season at Barca where he was simply unstoppable, clever, strong, quick and technically brilliant.’

Two videos. One where the french team are discussing what he’s like to play against like and it’s like they’ve never encountered anything like it and the other when zlatan just looks on in awe at him.

‘All the best bits of Messi and Cristiano rolled into one.’

‘Started watching football around ’97, didn’t have Sky so only saw MOTD and concentrated on my own team. So I thought the pinnacle of football talent was Collymore, Stig Inge Bjornebye et al.. summer ’98 – World Cup on TV – ooooh who’s this guy! My all-time favourite since then.’

‘Quite simply the best player you would want in a one on one with the keeper. The way he could always dribble past the keeper was beautiful.’

‘The natural ability of Messi and the strength and pace of Cristiano Ronaldo. If he had looked after himself better and avoided injury he would’ve been a contender for best ever.’

Because he was the best. The greatest. When he played, no matter who he was on the park with, he was the best player playing. Even in that ridiculous madrid side he stood out.

He had NO peer.

Lionel will always have a cristiano shaped ? Next to him.

Portrait of an icon: Ronaldo

What now?
These days he’s majority shareholder and president of Real Valladolid and seems to live entirely for pleasure. Although hyperthyroidism (undiagnosed during his playing career) has put some weight on him and he seems to have enjoyed a private life which might be best described as busy (including a three-month marriage whose ceremony had cost £700,000 and the sort of prostitute blackmail scam that Brazilian footballers tend to get caught up in), he is one of those figures whose happy presence somehow makes the air more rarefied, who brings an indefinable charisma with him wherever he goes. While Cristiano’s achievements and statistics are rightly lauded, he isn’t cool; he is not the real Ronaldo.

There will only ever be one Real Ronaldo and as Zlatan Ibrahimovic has said, “…as a football player, he was complete. There will never, in my view, be a better player than him.”