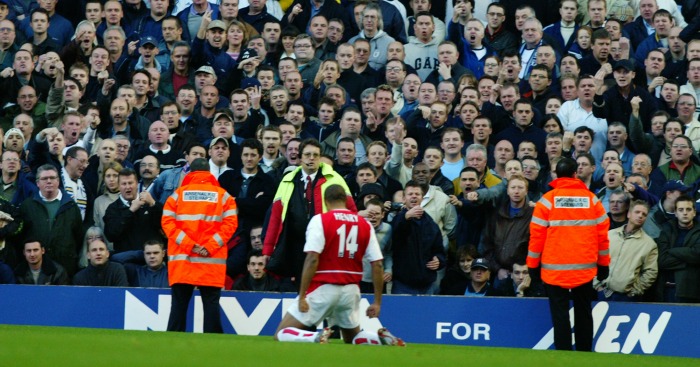 Thierry Henry was genuinely unplayable at times. What an absolutely sensational player he was for Arsenal and beyond.

Who’s this then?
Thierry Daniel Henry is now an ageless 43 years old. He was born in Les Ulis, Paris on August 7, 1977. A 6′ 2″ forward, he is widely considered one of the finest strikers to have graced the modern game.

He joined Monaco as a youth player under Arsene Wenger, making his debut in 1994 shortly before the manager left. His early career was spent on the left wing and while he showed promise, it was a stuttering start for a couple of years. However, by 1996, he’d hit his stride and was named French Young Footballer of the Year. In 1997 he won the league with Monaco and got his first international cap in 1998. That year Monaco got to the semi-final of the Champions League and he scored seven goals in the process.

He played 141 games for Monaco, scoring 28 times, before a £10.5million transfer to Juventus. It was a move which just didn’t work out as he was played on the left wing and as a wing back, so after just 19 games and three goals, he went to Arsenal for £11million in 1999 to reunite with Wenger and set about creating his legend.

Across eight seasons in north London he only scored fewer than 22 goals in one season – his last. For five consecutive campaigns he scored over 30 goals, his peak being in 2003/04 when he found the back of the next 39 times. In total he scored 226 (some list it as 228) goals in just 369 games for Arsenal and as such is the club’s all-time greatest goalscorer. He holds a whole host of records for them: Most league goals (175); most European goals (42); most Champions League goals (35); most Premier League goals in a season (30, 2003/04, joint with Robin van Persie); most Premier League hat-tricks (8); most European appearances (86); most Champions League appearances (78); fastest to 50 Premier League goals (83 appearances).

His 20 assists in the 2002/03 season remains an overall Premier League record.

He also racked up 123 caps for France and added 51 goals to his total, in doing so winning a World Cup and a European Championship.

Though only 30, he left Barcelona for New York Red Bulls and played five seasons for them as he picked up a shedload of easy cash and wound down his career, finally retiring in 2014 having played 135 times and scoring 52 goals. During that time, there were that odd seven games for Arsenal on loan when he scored twice, one on his second debut for them.

Once retired he set about being a charming presence in the TV studios for four years before taking up the reins back at Monaco. His 20% win ratio and -21 goal differential suggested management isn’t his game. He’s currently at Montreal Impact where he’d won three in ten before the break and he still doesn’t really seem suited to management.

He played 792 games in his career and scored 360 goals and rarely can anyone have made scoring goals look more effortless.

Why the love?
Before we get into this, we obviously have to deal with the Irish problem: that handball. In some quarters he remains unforgiven; so be it.

Obviously, anyone who is a prolific goalscorer is going to become a hero to many supporters of their club, but TH14 had something that took him beyond mere home fan worship. At his best, he played the game with the liquid grace of an interpretive modern dancer, not so much running across the grass as gliding without friction on invisible wings. There was an insouciance to his play born out of supreme confidence in his own skill and ability that destroyed many an opponent and was impossible for all not to admire.

There are few players of whom it can honestly be said that they were actually unplayable when at their peak but Thierry absolutely is one of them. There were times when no defender could get near him. He was so elusive, capable of skipping away and free from any defence. There were no sort of goals he couldn’t score, no angle too acute, no distance too far. Free-kicks or 75-yard mazy runs, power headers or tap-ins. He could do it all.

If you were supporting anyone playing Arsenal, there was, for what seemed like years, that sickening feeling in your stomach as soon as he picked up the ball in the front third. It didn’t matter what position he was in, if he had any room to move at all, you know that he’d use it to maximum effect. There was a period around 2003/04 when he just didn’t ever seem to miss. Every chance, every half chance, seemed to end up in a goal for him or someone else.

So there is plenty of football genius to love about TH throughout his playing career, but since retiring, away from the pitch he’s proven to be an entertaining pundit. Unusually, perhaps uniquely, he brings a vaguely camp quality to the gig, such as when hearing of Brendan Rodgers’ sacking:

Or being reminded of his handball against Ireland:

He doesn’t seem to take things overly seriously and that is usually the only sane way to approach a sport that has become far too serious, for far too many people, for far too long. One imagines he only lives for pleasure, wearing the softest cashmere, quaffing the finest wines and exuding the scent of wild mountain thyme and lemon verbena everywhere he goes.

What the people love
Hard to believe that it is now 13 years since he left Arsenal. So anyone under 20 is likely not to remember him in the red and white. However, he is one of those players who will always be transcendent of the era he played in.

‘His pace, his eye for goal, that Va Va Voom, do I need say more? I almost think he increased the sale of Renault cars due to his appearances in the adverts, iconic adverts may I add.’

‘Poetry in motion. Grace, technique, flair with the strength of a boxer and the pace of an Olympic sprinter. The finest all round forward the Premier League has ever seen. We were blessed to have such a player in or midst. An absolute marvel of a player.’

‘A fantastic footballer. One of the best players never to win the Ballon D’or. He – and Kanu – was the reason why I’m an Arsenal fan.’

‘When he came back in 2012 and promptly won the FA Cup tie vs Leeds at the Emirates. How the stadium erupted remains etched in memory as were his comments declaring that he’d finally scored as a fan and not just a player. What a legend.’

This won’t go well. But as an Irishman i have no problem. If Robbie Keane has done it, we’d have been selling inflatable hands with the slogan “I handed Ireland a World Cup Ticket”. One of the best players to ever grave the Premier League

‘Apparently Wenger went to his house once and couldn’t really get his attention, as he was properly engrossed in some lower league English game on Sky. Arguably the world’s best player at the time being into Rochdale v Scunthorpe is hugely endearing. He’s a massive football geek.’

‘I just remember when I first got into football, as a kid I used to play Saturday mornings. Getting home, sometimes when the football had already kicked off, I’d be surprised if Henry hadn’t scored, it was just a regular occurrence.’

‘At his best he moved around the pitch with the grace, guile and confidence of a predatory leopard hunting down its prey.’

‘Maybe some players at their peak who’ve reached a similar level but not over the same duration that Henry did it.’

No personal anecdotes but – as a total neutral – for me he’s the greatest player to ever play in the Premier League. Ronaldo went on to better things but Henry’s the only guy I saw playing in the UK and thought – “He’s the best in the world right now.”

‘This will be such a tricky one for all the Irish Arsenal fans (myself included) because of you know what. I still love him though. That goal against Man Utd at Highbury, different class.’

‘Looked lost at Juve out on the wing before Wenger made him a superstar after throwing him up front at the Arse where Va Va Voom shredded pitiable EPL defences each week before a more global audience. Was a lot more subdued in the UCL…oh and the Irish just LOVE him.’

‘My earliest football memory is watching Premier League highlights in the food court of my local mall in 2002/2003 (I think). The way Henry moved, behaved, scored, and made defenders look foolish was the reason I started watching football and supporting Arsenal.’

‘Only one of two players in the premier league to be considered the greatest in the world at one point. (Ronaldo). Even those who don’t support Arsenal love him.’

Was lucky enough to meet the great man and have him sign a printed copy 🙂 pic.twitter.com/yTemfgMHGy

A mere 75-yard run before spanking it in:

Speed, power and a dummy for the goal. Easy:

What now?
He seems intent on trying to be a manager but he’s not fooling anyone. He’s earned the right to give it a go for as long as he wants but the feeling that he’ll eventually end up back in the studio is irresistible.

Perhaps he could coach, but it must be a thankless task trying to get players to do something half as good as you could do it and taking five times as long. All of which points to the difficulty of the legendary former footballer. He’s only 43 with likely over five decades left to live but with a net worth estimated at $60million he has no need to work for money ever again.

So what do you do? While some are happy to play golf until they drop dead, the more intellectually curious need something else to fill up their lives and give them purpose and meaning. A rarely considered by-product of the massive wealth available in modern football is how it steals away meaning from life once your playing days are through and leaves a gaping hole that is hard to fill.

Doing nothing and living a life of luxury sounds easy but what is the point, really? Everyone needs something to aim for, to pursue and if that doesn’t have to be paid work, you would need to build a new life from scratch to give you that purpose. That’s why so many must go into management: just because it fills up the time and offers structure. But then, all you’re doing is taking the job of someone who needs to earn a living. A rich, famous kid clogging up the system because he’s nothing else to do, that’s how some might think of them.

It’s one thing if you turn out to be a genius, quite another if, like so many, you’re somewhere between alright and not very good. Then what do you do? A couple of hours per week in the TV studio is a shallow existence and not likely to satisfy the thoughtful or curious, as much as we’d all welcome Thierry on the telly.

It’s also not hard to see the downsides of being an ex-player who was so good. You know nothing in your life is going to reach that peak, that you have had your moment in the sun and anything you do in the future, you will not be so stellar again. That must be hard to live with. At 43 to know your best days are already behind you can’t be psychologically easy.

Still, he’ll never have to buy a drink in north London and will always have the comfort of knowing he has given so much pleasure to so many. We should all be so lucky.