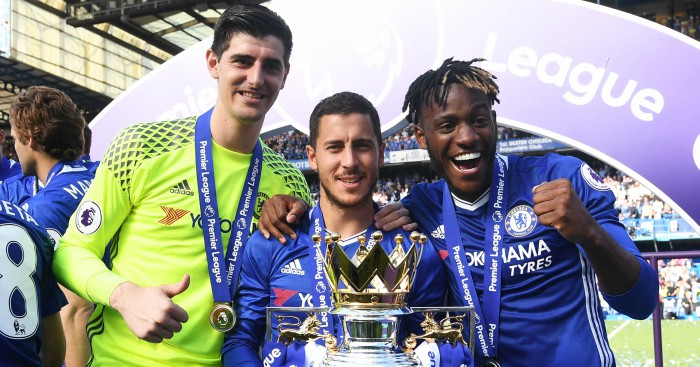 David Luiz has discussed the possibility of Chelsea losing both Thibaut Courtois and Eden Hazard.

Courtois has a year remaining on his contract and has been repeatedly linked with a move to Real Madrid. Chelsea risk losing him for a reduced fee in January or for free next summer.

Hazard, whose deal expires in 2020, has stalled over a new contract offer and has long been the subject of speculation over a move to Real.

Head coach Maurizio Sarri on Sunday, following the Community Shield loss to Manchester City at Wembley, said he would sanction Courtois’ departure if the goalkeeper expresses a desire to leave.

And Courtois reportedly stated his wish to the Italian on Monday.

The transfer window for incoming players to Premier League clubs closes this Thursday, so time is against Chelsea if they are to recruit any would-be replacements.

David Luiz has urged Courtois and Hazard to stay, while insisting the Blues have enough quality even if the pair leave.

“Chelsea wants for the best players to stay,” Luiz said.

“If they decide to leave, I think we will continue with fantastic players.”

Luiz knows what life is like away from Chelsea, having spent two seasons at Paris St Germain before returning to Stamford Bridge in August 2016.

He played a crucial role in Chelsea’s title triumph in Antonio Conte’s first season as head coach before injury and a rumoured fallout saw him sidelined.

He insists he never contemplated leaving Chelsea for a second time and is now keen to show he can be a key figure for Sarri’s Chelsea.

“I was just working and trying to do my best,” Luiz added.

“Everybody has the opportunity, you just have to show him character, physical quality, technical quality, so since the first day I’m trying to do that.”

Sarri has torn up Conte’s three-man defence, replacing it with a back four, in the three weeks since his appointment.

The 59-year-old Italian’s style has been likened to Pep Guardiola’s.

But while Manchester City afforded the Catalan time to adjust in his first season in England, there is precious little time for Sarri.

“I hope we can understand it quickly and can fight for all the titles,” Luiz added.