Home Burnley Everything we knew about Burnley is no longer true… 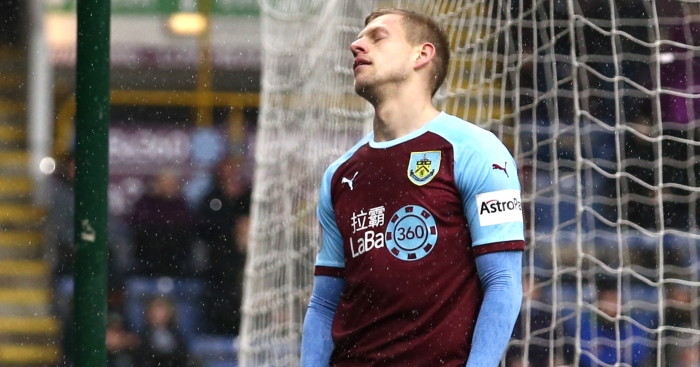 Because of how these things work, clubs who sit outside the Premier League’s elite become defined by one or two stereotypes. Crystal Palace are Wilfried Zaha and the Holmesdale ultras. Bournemouth are Eddie Howe. Wolves are the Jorge Mendes XI. Southampton are buy low and sell high to Liverpool. These stereotypes are usually unfair and almost always highly reductive, but that’s kinda the point.

Burnley have their own stereotypes. A more casual Premier League supporter might discuss their success through back-to-basics football, their strong home record at Turf Moor (‘difficult place to go’ klaxon), a sturdy defence and a wonderful underdog story all wrapped up in Sean Dyche’s gruff, gravelly voice and gruff, gravelly demeanour.

But Burnley are struggling. After a run of eight unbeaten league matches between December and February appeared to have lifted them well away from relegation trouble, four straight defeats have coincided with the teams below them picking up points regularly.

Dyche’s side have played a game more than Southampton directly above and Cardiff City directly below, and are out of the bottom three on goal difference alone. Four of their final seven league games are against teams currently in the top seven. Away trips to Bournemouth and Everton make up two of the other three.

There is no single reason for Burnley struggling this season – having flourished in 2017/18 – but this is a club that has lost the qualities which fed those stereotypes.

The strong home record? Burnley have played 40 league games at Turf Moor since February 2017 and won only 13; this season, only Fulham, Crystal Palace and Huddersfield have taken fewer points at home.

That sturdy defence? Burnley have faced more shots than any other Premier League team this season, and the gap to Fulham in second is 57 – that’s bigger than the gap between Brighton in third and Crystal Palace in 14th. They also rank second for shots on target faced and only Fulham have conceded more goals. Finally, Burnley have conceded four or more goals on six separate occasions in the league. That’s also the most in the division. Resilience has been shattered.

It would be a stretch to say that Burnley have shaken off the back-to-basics stereotype, but their improvement post-Christmas actually came not just with a change of goalkeeper, but with the introduction of Dwight McNeil into the starting XI. McNeil’s second career league start came in the 2-0 home win against West Ham on December 30 that followed a run of four points from 11 games and started that unbeaten run.

Not only did McNeil become the first teenager to start a Premier League game for Burnley, he linked midfield and attack in a way that Dyche had barely tried before. He accounts for three of the top four highest completed dribbles in a Burnley match this season. He ranks third for completed dribbles in Burnley’s squad (one behind Jack Cork in second) having played 40% of the minutes of those above him.

But Burnley have fallen back into their old ways. Against Leicester before the international break, Harry Maguire’s early red card should have allowed them to take the game to their opponents and secure crucial points. Instead Burnley went back into their shells, struggled to cope with the pressure to be proactive and lost to a late Wes Morgan winner. That defeat has caused understandable worry among supporters.

And so to the final stereotype: Burnley are not even underdogs in this relegation fight. Cardiff have the worst starting XI in the league, suffered the Emiliano Sala tragedy in January (regardless of the questionable actions of the club in the wake of that tragedy) and are favourites to be relegated alongside Fulham and Huddersfield. It is Neil Warnock that has nothing to lose, not Dyche. The fixture between the two on April 13 is monumental. Will Burnley cope with the pressure as badly as they did against Leicester?

At any other club, taking a side down from seventh to 17th would be a sackable offence. Dyche’s achievements at Turf Moor have quite understandably made him untouchable, to the extent that they have effectively become Dyche FC; without star names, his successes and failures are their successes and failures. For all Dyche’s championing of British managers and apparent bitterness at not being regarded for considerable promotion, it is difficult to know where else he would fit. For the first time in two years, Dyche is making mistakes that merit scrutiny and it is not blasphemous to suggest as much.

Clearly part – a large part – of this is ‘victim of success’ syndrome. Burnley are a Championship club that gatecrashed a high-end party in their stonewashed denim jeans and faded t-shirt; Dyche earned them VIP entry. We took notice of Burnley when they flew high and we take notice when they fall, but pay little attention in between. That’s on us, not Dyche.

But Burnley might be reaching a juncture where the ‘story’ isn’t enough. If that says more about our obsession with the ‘narrative’ – one pound placed into the swear jar – some Burnley supporters are having similar thoughts. If Burnley do stay up, what happens next? More of the same is the only logical answer.

More immediately, Dyche needs to find a way out of this latest rut. Burnley’s manager must choose whether to have faith that what always used to work will suddenly start working better, or accept that necessity might need to be the mother of his invention. Continue to lose games and leak goals at their current rate, and the Burnley fairytale will quickly become an identity crisis.