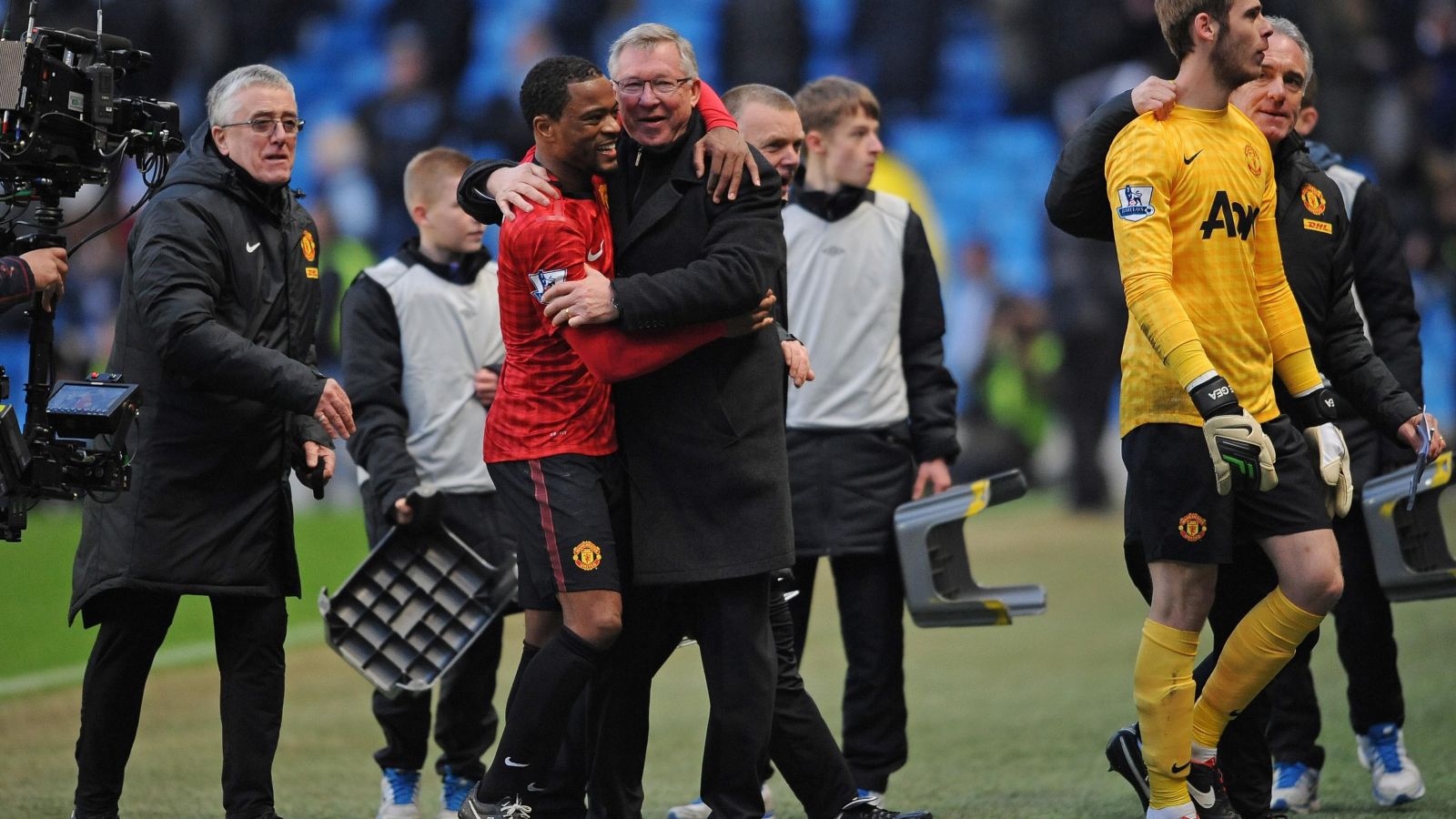 Patrice Evra reveals Sir Alex Ferguson told him that he would stay for “another ten years” at Man Utd before leaving at the end of that season.

The Red Devils have struggled to hit the heights of their time under Ferguson in recent years after the Scot retired from football management in 2013.

Man Utd have failed to come close to winning another Premier League trophy in that time but former left-back Evra has revealed that Ferguson was planning on staying another decade before a disagreement with the board.

On United’s current struggles and what Ferguson told him weeks before leaving, Evra told Betfair: “I never thought we’d have to wait this long to lift the Premier League trophy again.

“It was really sad to hear that Sir Alex Ferguson was leaving, because two weeks before the end of the season, I remember Ferguson came to me and said: ‘Patrice, I see in the press they’re saying I’m going to leave, but trust me I’m going to be here another ten years.’

“He told me we need to win the Champions League again, and he needed two players. One was Cristiano Ronaldo, the other was Gareth Bale.

“It was something like £200m to get both of those two players at the club at the time, and United, the board, didn’t agree with that. Now you can see we’ve spent even more money than that and look where we are.

“That’s why it was really painful, that last league trophy. Of course, I didn’t expect to wait for so long.

“After David Moyes came, it didn’t work out, so we changed managers. We need consistency, we need to trust and I don’t want to become a club where every year or two years we change the manager because we won’t achieve anything by doing this.

“Nobody expected that, none of the players. I didn’t expect to leave the club either. So there were many decisions that were massive surprises for us after the last league trophy.”

Evra won five Premier League titles, three League Cups and a Champions League during his time at Man Utd but he admits he had a shaky start at Old Trafford.

The former Man Utd defender added: “I remember I had Liverpool, Inter and Manchester United and my agent said to me ‘those clubs are interested,’ I told him that I would pick United, and when he asked me why I said: ‘Because of Cantona, he’s a role model.’

“Then, I didn’t really know what it was about, I was playing in Monaco in front of 8,000 people, and sometimes I could even hear a fan’s cell phone in the stands. So, when I arrived to Old Trafford, I remember it was a cup game that I wasn’t registered in time for, we were playing a side from the fifth division and I remember I asked Louis Saha if people would show up, because in France when you don’t play against a big team people don’t show up, and there were 75,000 people there. I said: ‘OK, this is a new world.’

“My first game was a disaster, I remember we played against City. I’m not a breakfast fan, and at nine in the morning I saw my fellow teammates, Louis Saha and Mikael Silvestre eating pasta and beans, and for me it was the first time I was playing a game at 12 so I started eating breakfast too and I was feeling really full. I went into my room and I was vomiting. I was sweating, feeling sick and I just had three training sessions with my teammates after coming in January.

“Imagine me being in Monte Carlo, nice and sunny, then arriving in Manchester in January. It was a massive change. We started the game and were 2-0 down at halftime, after the first five minutes I was elbowed and got cut, I remember I was against the post talking to myself saying: ‘what the hell am I doing here? The football is so fast, so strong, I was chilling in Monte Carlo, I was named the best left-back four seasons in a row.’

“I was thinking I’d made it and that I was a big player. Then at half time, that was the first time I was introduced to the hairdryer by Sir Alex Ferguson. He destroyed everyone, and he came to me and said: ‘You now are going to sit next to me and learn English football.’

“So imagine, I played for the French national team, I’d been in the final of the Champions League, and in my first game for United I was subbed after 45 minutes.

“It got worse, I went home and my agent looked at me, put his hand on me and said: ‘Patrice, I’m sorry, I shouldn’t have brought you to Manchester United, you should have stayed at Monaco, it’s going to be really tough for you.’ Imagine your own agent doesn’t believe in you anymore, imagine the pain.

“I remember this was a big wake up call for me, and I always say that this was one of my favourite moments. I thought I was a big player and my feet were brought right back down to earth.

“I had to work hard, I missed the pre-season with them, the year after I went to South Africa for the United pre-season and won the man of the tournament and I remember Mike Phelan shaking my hand and saying to me: ‘now you’re a Man United player.’ The rest is history.”