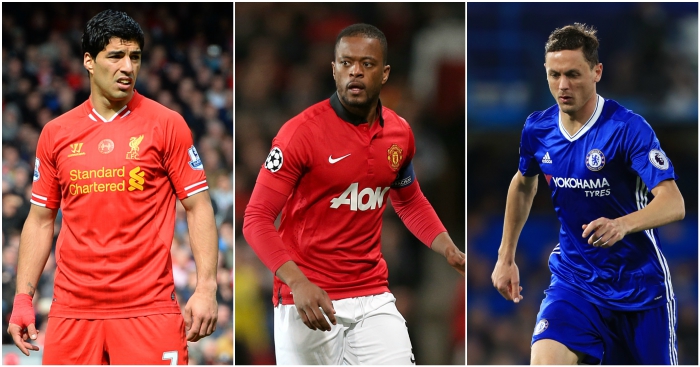 We had the worst ten last week, so what did you really think was coming?

10) Wilfried Zaha (Crystal Palace)
Given his current swagger and links to some of the Premier League’s elite, it’s easy to forget that Zaha has already had and blown one chance at the top. The Manchester United move came too early in his career and contained too much David Moyes for him to thrive. Rio Ferdinand blames Moyes for not giving Zaha enough chances, but the truth is that an under-pressure manager found it hard to trust a winger still finding his feet.

Still, all’s well that ends well. A loan at Cardiff City was sandwiched by similar spells at former club Crystal Palace, and Zaha was then allowed to rejoin Palace on a permanent deal for a fee of just £6m. That looked cheap in 2015, but three years later – and with Zaha at the top of his game – it was a steal. Palace are fortunate that he will presumably think twice before leaving Selhurst again.

9) Christophe Dugarry (Birmingham City)
Having left Bordeaux for Milan in 1996, Dugarry had never been a prolific goalscorer. Despite playing for Milan, Barcelona and Marseille, three 90s football stalwarts, the striker scored 22 league goals in six years. When his return to Bordeaux was equally unsuccessful, Dugarry was made available for loan.

Birmingham City were the unlikely destination, where Steve Bruce had created a squad desperately low on flair. The club captain was Steve Vickers, his vice-captain was Jeff Kenna and the top scorer was Stern John; you see the point. Into this scene was plunged a maverick Frenchman with long hair who captured the hearts of Blues supporters.

Dugarry actually only scored five league goals, but it did not matter. They all came in a bizarre two-week period when Birmingham won four straight league games and moved from 17th in the Premier League to 12th. Safety – and Dugarry’s cult hero status – were assured.

8) Clint Dempsey (Fulham)
When Dempsey joined Fulham from New England Revolution, he became the most expensive American football import in Premier League history. Yet at £2m and with no fanfare, Fulham supporters didn’t expect too much.

Dempsey established himself as a cult hero by scoring the goal against Liverpool on the final day of 2006/07 that guaranteed Fulham’s survival from relegation, but that was only the start. He would score 50 league goals, including 17 in his final season (becoming the club’s highest scorer in the Premier League era), was named their Player of the Season in 2010/11 and 2011/12, their top scorer in both of those campaigns and led them to the Europa League final in 2010. The chip against Juventus still makes me smile now.

Eventually leaving for Tottenham after Fulham fell out with Liverpool over his potential move, Dempsey is now back in MLS with Seattle Sounders. He’s somehow still only 34.

7) Brede Hangeland (Fulham)
Yet ‘The Deuce’ Dempsey isn’t even the highest-ranked Fulham player on this list. That honour goes to Hangeland. Fun fact: Dempsey and Hangeland were born only 140 miles away from each other in Texas.

The Norwegian was linked with moves to multiple Premier League clubs in 2007, with Liverpool, Manchester City and Newcastle United amongst them. He eventually settled on Fulham because he knew Roy Hodgson from his time at Viking. It was a wonderful coup.

Hangeland was arguably the most consistent defender in the Premier League between 2008 and 2013, and certainly gave the best value for money. He missed 11 league games in five seasons, playing a total of 230 club games for Fulham in those campaigns alone. And then he was dismissed by e-mail having been advised to treat an injury with cheese. Good old Felix Magath.

6) Nemanja Matic (Chelsea)
Matic would have been higher on this list had Chelsea not had to pay £21m for a midfielder they included as part of a deal to sign David Luiz. Yet Matic left Stamford Bridge as a box-to-box or advanced midfielder and returned as a defensive stalwart.

He immediately became one of the most effective players in the Premier League, the perfect Jose Mourinho disciple and described by his manager as “a giant, not for his size but for the way he plays”.

Matic won two Premier League titles in three seasons at Stamford Bridge as well as the FA Cup and League Cup. That Chelsea sold him to Jose Mourinho, knowing what they knew, remains one of the great mysteries.

5) Philippe Coutinho (Liverpool)
I shall await the accusations of big club bias, but it’s difficult to argue with any member of a top five that opens with the second most expensive player in the game’s history. Coutinho arrived from Inter in January 2013 having started just three Serie A games in five months. At least Inter included a huge percentage of next sale clause – somewhere around 1.5%.

Said it before and I’ll say it again: Liverpool did brilliantly to get that type of money for Coutinho. He is a gem of a player, but to receive the second highest fee of all time for a player without a natural position in the team and who had made it abundantly clear that he had no intention of sticking around beyond January is a fine effort. I’m doubtful that Coutinho will make it into a La Liga version of this list, but he belongs here for individual skill and the profit made.

More from Planet Sport: Analysing every one of Coutinho’s touches on his full Barcelona debut (Planet Football)

4) Mikel Arteta (Everton)
A Liverpool and Manchester United cartel broken up by Everton’s Mikel Arteta, who must surely rank as one of the greatest bargain signings in Premier League history. Initially joining on loan and then making the transfer permanent for £2m, Arteta became one of the most popular players in Everton’s history until his departure six years later.

As evidence, the Guardian’s Andy Hunter quotes a passage from Everton fanzine When Skies Are Grey on Arteta’s comeback after 11 months out with career-threatening injury:

“As I saw him run on to the Goodison pitch after far too long away, tears streamed down my face and my wife looked at me with a mixture of disbelief and resignation. It was a wonderful moment and proof to me that, along with Duncan Ferguson, Peter Reid and Bob Latchford, he will always be, forgive me for a Kenwright-ism, a God to me.”

Both halves of that chant might have been true. Vidic arrived at a time when ball-playing central defenders were becoming the must-have, but if Rio Ferdinand provided the grace then Vidic looked after the guts.

Signed for £7m from Spartak Moscow, Vidic proved himself worth at least five times that price. His commitment became legendary amongst Manchester United supporters, and even if he hung on at Old Trafford slightly too long, the reputation could never be tarnished. Not when you’ve won 15 trophies and only one non-British or Irish player has won more Premier League titles.

2) Luis Suarez (Liverpool)
It’s very easy to forget given his supreme form in his final two seasons, but Suarez wasn’t always prolific at Liverpool. The Uruguayan scored 15 league goals in 44 matches in his first 18 months in England, a period that included his eight-game ban for racially abusing Patrice Evra.

Yet Suarez’s Liverpool form was transformed after signing his new contract in August 2012, scoring 54 times in 66 Premier League games thereafter, including five hat-tricks in 18 months. Yet like Alexis Sanchez at Arsenal, Suarez’s spirit made him Liverpool’s leader as much as his goals. He became the first non-European to be named PFA Player of the Year, and only the seventh player to score 30 goals in a Premier League season. His 31 came in just 33 matches.

1) Patrice Evra (Manchester United)
Being French, brilliant and kung fu-kicking a spectator makes you a Manchester United cult hero, and if Eric Cantona is the most popular foreign player in the club’s history then Evra cannot be far behind. If Cantona was their biggest bargain in the Premier League era at £1m, the £5.5m paid in January 2006 for Evra must also come close.

Evra was the perfect modern full-back for United, comfortably eclipsing the work of Mikael Silvestre and Gabriel Heinze as Alex Ferguson finally found the rightful heir to Denis Irwin. He was happy to overlap his winger and provide support in attack, but was never guilty of dereliction of defensive duties.

Most of all, he just got it. Even post-Marseille sacking, Evra retains an enormous amount of goodwill in the game because he understands both his role within it and his responsibility to make a connection with football supporters. He is one of us amongst a sea of them.