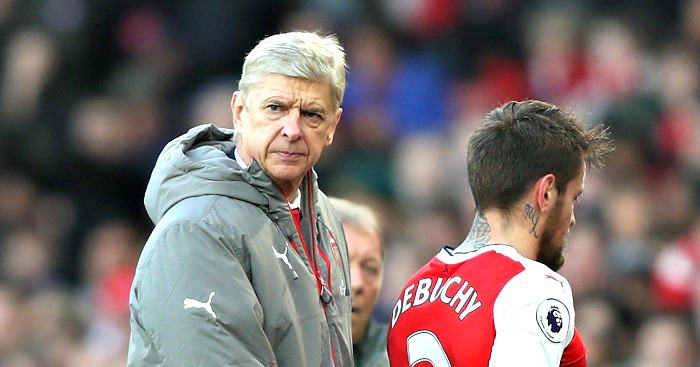 Former Arsenal defender Mathieu Debuchy has hit out at Arsene Wenger over a failed move to Manchester United.

Debuchy eventually got a move to Ligue 1 side Saint-Etienne on a free transfer on deadline day after his deal at Arsenal was terminated.

The Frenchman made just 29 appearances for the Gunners in over three years at the club, and two years ago he was the subject of interest from United.

However, a move to Old Trafford never materialised, and he instead joined Bordeaux on loan, despite Debuchy’s wishes.

“I would have liked to have left Arsenal earlier and to have played for a different club,” he told RMC Sport.

“There were moments when I was angry with the manager.

“There was an approach from Manchester United and he did not want me to leave.”

Last year, Wenger praised Debuchy for his professionalism despite limited opportunities at the Emirates Stadium.

The Arsenal boss said: “His future is down to his performances now and I opened the door for him many times because he didn’t play and because he has [Hector] Bellerin in front of him.

“We have as well Ainsley [Maitland-Niles] now who can play right and left, but I consider him like anybody else and I must say I have a huge respect for his professional side and how much he did fight to come back to the top. He’s a tough, tough guy. Tough worker.

“He’s mentally strong. I’ve said many times in this job you can never give up, no matter what happens for you and always be ready in case you’re needed. Not many can do that, but Mathieu can do that.”