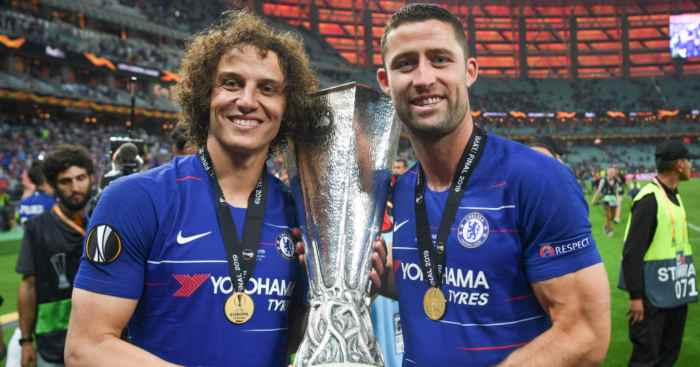 Cesc Fabregas thinks Maurizio Sarri should have given Gary Cahill the captain’s armband in their Europa League final success over Arsenal.

Eden Hazard’s brace helped the Blues on their way to a 4-1 victory that saw Sarri pick up his first major trophy on what could prove to be his final match at the Stamford Bridge helm.

Cahill has definitely played his final match for Chelsea as he looks for a new club in the summer when his contract expires.

Cesar Azpilicueta was the captain for their Europa League triumph but Fabregas feels Sarri missed a chance to be classy and hand the armband to Cahill.

“A fantastic servant for the club. I mean, if there is one thing that I am missing tonight, it was this touch from somebody,” Fabregas told BT Sport.

“Especially it should come – and I know it’s his [Sarri’s] night, I don’t want to say anything negative tonight – but a little touch to Gary Cahill, five minutes to go, 4-1 against Arsenal, put him on, give him the armband.

“Let him leave as a proper hero as he deserves. I missed that to be honest. But anyway, great night for Chelsea football club.”

Another former Chelsea player Eidar Gudjohnsen, who was also in the studio, agreed: “That is absolutely spot on. I am not sure it even crossed Sarri’s mind, because maybe as a coach he was so focused on everything that goes on.”

Fabregas added: “But that’s why you have people around you as well that help you.”

To which Gudjohnsen responded: “Yeah, people that say, “Listen, five minutes to go, 4-1 up, show the respect that he deserves”. He’s been a fantastic servant to Chelsea.”