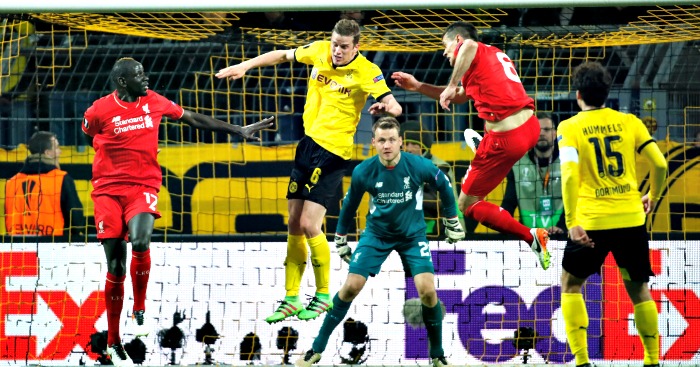 Dortmund travel to Liverpool on Thursday for the second leg of their Europa League quarter-final, with the tie finely-poised at 1-1 after an exciting first-leg draw.

Divock Origi opened the scoring last week in Germany, handing the Reds a crucial away goal, while Mats Hummels powered home an equaliser for Thomas Tuchel’s side.

A 0-0 draw would be enough to see Liverpool reach the competition semi-finals for the first time since 2010, but Freund, who played for Dortmund for five years from 1993 before joining Tottenham in 1998, believes he has identified the club’s “weak link”.

“A good start in the game would be very good,” he told Sky Sports. “Dortmund should attack very early in the first ten minutes. They should try to force Liverpool to make mistakes.

“The central defenders of the Reds are the weakest links – Dejan Lovren and Mamadou Sakho. If they are under pressure, they make mistakes.

“Just don’t be intimidated,” Freund added, advising Dortmund’s players. “It’s the last chance for Liverpool to make it in the Champions League next year. In the Premier League they won’t qualify.

“It’s a very special stadium. It’s so tight, loud and emotional. But Dortmund should have got used to that kind of atmosphere from their own stadium. They have probably the best stadium in Europe.”