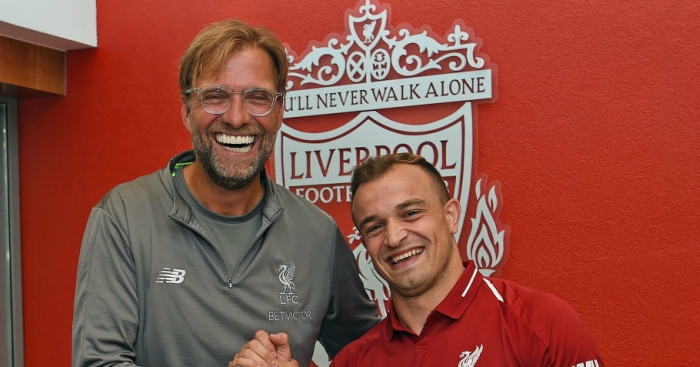 Jurgen Klopp targeted Lyon’s Nabil Fekir early in the window, only for issues to arise in Fekir’s medical.

Liverpool then turned to Shaqiri as a cheaper option, happy to be a squad player after relegation from the Premier League with Stoke.

Speaking to Sky Sports, Thompson believes that Shaqiri could work out well but pointed out that he is not know for his work rate.

“He’s a player, as we know, who is maybe not a workaholic at the moment like Klopp would like,” Thompson said.

“But my goodness he’s got an assist, he’s got a goal, set plays.

“So that’s the great thing Jurgen has done with the transfer market. He has identified the areas which he needs to improve his squad and gone for it.

“Shaqiri, yeah maybe a few problems about him, but he’s got this in his locker. Set plays, corner kicks, he delivers into dangerous areas.

“He’s going to a club now which in all intents and purposes is a bigger club than what Stoke is. I think the expectations and the demands on him will be as it should be.

“At £13m it is a snip and I hope upon hope that this goes right for the boy. It could be a Balotelli move, then again it could be a Mane move and that is the thing.

“He’s got to learn and that is the only thing, this high-pressure game that Jurgen demands from everybody. Everybody has to fit in and Shaqiri has to bring that to the table.”