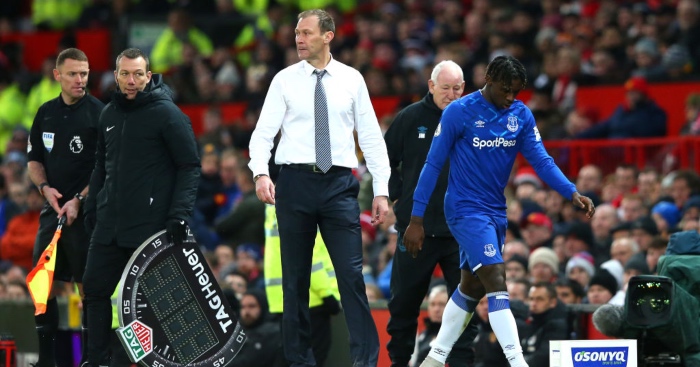 Duncan Ferguson insists his decision to substitute teenager Moise Kean after just 18 minutes against Manchester United was “nothing personal”, but John Arne Riise believes the Everton boss should have been more “human”.

The striker, a £27million summer signing from Juventus, was brought off the bench in the 70th minute of the 1-1 draw at Old Trafford but was then hauled off two minutes from time.

Interim boss Ferguson blanked Kean as he walked past him and the 19-year-old walked straight down the tunnel.

Kean, who has yet to score for the club, looked devastated and Ferguson’s treatment of the teenager has sparked criticism from some quarters.

Former Liverpool left-back Riise, told talkSPORT: “Sometimes in football you have to think about the human part.

“He doesn’t even shake his hand. Give him a hug – he’s a young boy. That is the worst thing you can do for any player but especially a young boy who doesn’t speak the language very well.

“He destroyed that young player.”

Former Everton manager Sam Allardyce also felt Ferguson got it wrong, but put it down to his inexperience as a manager.

Allardyce told talkSPORT: “He probably should have embraced him when he came off. The people around him should have said ‘gaffer, don’t do that’.

“He is in the pressure pot for the first time, he’s at Old Trafford, he’s getting a result and in his mind he’s thinking ‘he’s not doing what he should have done, get him off’.

“Someone should have said ‘do you think that’s right gaffer?’ He’s done fantastic [Ferguson] but under the pressure we all make mistakes. That is why your staff is there.”

Defending his decision, Ferguson insisted it was ‘nothing personal’ against Kean: “I was just doing it for fresh legs. Unfortunately he was the one I decided to bring off.

“I see why he’s upset, but it’s about the team.

“I just needed to make a substitution to kill a bit of time. I’ve got so many strikers on the bench, I just decided to make that change.

“It was nothing personal to Moise Keane really.”

A Victor Lindelof own goal had given Everton a first-half lead but the hosts claimed a deserved point in an enjoyable Premier League encounter with a 77th-minute equaliser from substitute Mason Greenwood.