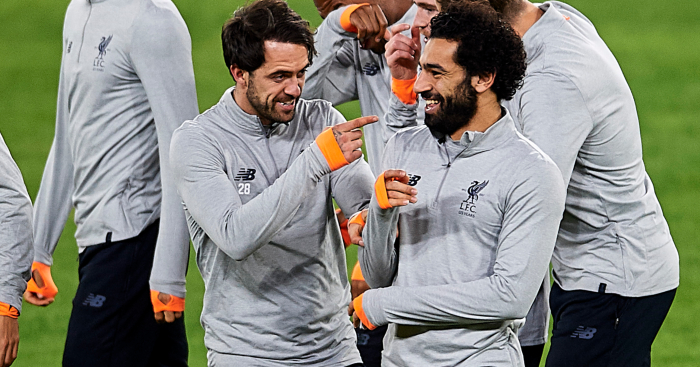 Danny Ings says he struck a a gentleman’s bet with Mo Salah when he left Liverpool for Southampton this summer.

Saints beat off stiff competition for the signature of the former Liverpool forward last month.

Winchester-born Ings returned to Hampshire and joined Southampton on an initial 12-month loan contract, which will become permanent next summer until 2022 in a deal that will cost Saints £20million.

Southampton boss Mark Hughes said the 26-year-old would “have a point to prove” on the south coast after his time on the fringes at Liverpool and already he has scored twice in four Premier League games.

And Ings has revealed he and Salah, who also has two goals from four games, have agreed an ambitious wager over who will bag more goals this season.

“[We’ve got] a little one. Mo is Mo. One of the best players in the world,” Ings said. “It was more of a bit of banter between us. Mo’s a good friend of mine. Everything he gets he deserves.

“There’s not many more humble players in football. It’s a bit of a laugh. Hopefully, we’ll both score plenty of goals this season.

“Can I beat him? It would be incredible wouldn’t it? I’m just working every day to improve. I’ve missed a lot of football.”

But after Salah’s incredible 44-goal haul last season, Ings admitted there was no money involved.

He added: “I wouldn’t be stupid enough to put any cash on it! It’s just a bit of banter. People would think I’m mad to take on that bet if there was cash involved. He proposed it on messages when I left.

“I don’t have a target. I don’t want to limit myself on what I can achieve. As long as we’re winning I’m happy.”