Home All The News Ex-PL ref: Salah should have been punished for diving 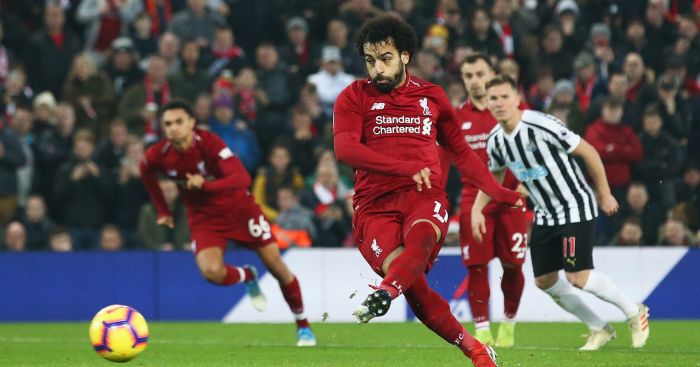 Former Premier League referee Mark Halsey reckons Mohamed Salah should have been punished for his “act of simulation” against Newcastle United on Boxing Day.

Salah went down in the area to earn a penalty – which he scored – in the 4-0 Boxing Day win over Rafa Benitez’s men.

He tumbled after pressure from defender Paul Dummett, who appeared to put his hand on the Egypt international.

And the Football Association has decided not to pursue a charge as there was contact, so the incident did not meet the threshold for a diving charge.

However, Halsey thinks Salah should have been banned and he claims many other people he knows agree with his viewpoint.

“I find it incredible Mo Salah’s act of simulation was not even passed on to the FA’s independent panel,” Halsey told The Sun.

“Surely cases of this nature should automatically be looked at by the panel. Otherwise, what’s the point of it?

“Elsewhere, cases of an alleged act of violent conduct unseen by match officials, but caught on camera, are passed on to the three-person panel of ex-referees and the same should apply for simulation.

“This is not about Salah. He’s a wonderful player for Liverpool but this is about ALL acts of simulation.

“What was the difference between Salah’s act of simulation and Oumar Niasse of Everton against Crystal Palace last season?

“The verdict on Niasse was that there was ‘clear and overwhelming evidence the player exaggerated the effect of normal contact in order to deceive the referee’.

“That ruling is no different to what Salah did against Newcastle.

“I have spoken to ex-pro footballers in the last 24 hours and they are all in agreement with me.

“Simulation is a disease in the game and it’s getting worse. Stronger action is needed and that has to come from the FA.”