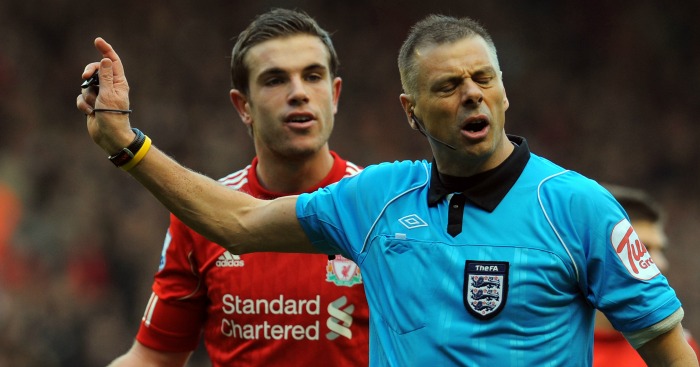 Former Premier League referee Mark Halsey has admitted he booked a player who asked for a caution so he did not miss a big top-flight derby game.

Halsey, who took charge of fixtures in the Premier League between 1999 and 2013, revealed the story in a discussion regarding the possibility of players deliberating earning bookings.

Asked by CNN Sport whether a player had tried to get booked in a match he was refereeing, Halsey replied: “The answer, honestly, is yes, I have.

Asked whether he did caution the player in a game in 2011, Halsey added: “Yes, I did.

“I said, ‘Listen, when I give a decision against you next time’ – because I knew it would happen because he was always getting cautioned anyway – ‘just boot that ball 50 yards down the other end and I can then caution you for dissent by action’. He thanked me after the game.”

In 2013, the Football Association gave then-Leyton Orient midfielder Romain Vincelot a one-match ban for deliberately picking up a yellow card to trigger a suspension.

Vincelot was due to miss a Football League Trophy match, rather than a League One game, after incurring his fifth booking of that season.

However, the FA’s suspension meant he was sidelined for Orient’s league contest with Preston too.

Halsey later replied to a user on Twitter saying he had told the player to “do something stupid” if they wanted to be booked.

He wrote: “It’s all in my autobiography John that came out 4 years ago my friend, was asked I need a caution I replied do something stupid and you will get cautioned,and he did end of story.”

It is understood the Professional Game Match Officials Limited (PGMOL), the body which oversees match officials in the top flight, had not previously been aware of the incident Halsey referenced.

PGMOL declined to comment when contacted by Press Association Sport.