Home Arsenal Ex-teammate lays into Henry: ‘He’s still a player in his mind’ 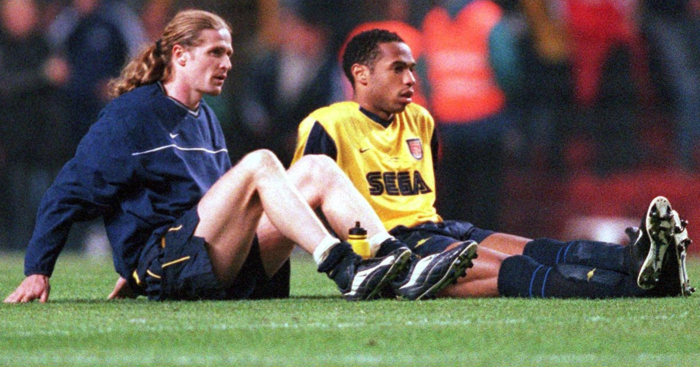 Thierry Henry “is still a player in his mind”, according to former France and Arsenal teammate Emmanuel Petit.

Henry is set to be sacked from his first ever managerial post just three months after being appointed by Monaco.

The 41-year-old, who was rather critical of an opposition player’s grandmother recently, has failed to rescue Monaco from their Ligue Un relegation battle.

Sources have claimed that members of the Monaco squad have complained about Henry’s treatment towards them, with the Arsenal legend having publicly shamed one player in particular.

Petit believes the former Sky pundit is simply struggling to cope with his new career as a manager, and that he “is still a player in his mind”.

“In his short time at Monaco, we have seen too many times his frustration on the bench,” Petit told Goal.

“Also, he has made too many weird comments after games and he lets his frustration become too much.

“It looks to me like he is still a player in his mind and he has to understand how to be 100 per-cent a manager. Maybe that has been his biggest problem at Monaco.

“Sometimes when you are a great player and then a TV pundit, you make comments that you might not make if you realise what it is like to be a manager.

“I don’t think Thierry saw that coming when he went into Monaco. Maybe he felt his personality would be enough to turn this team around, but it hasn’t worked and as a manager, this will be a very big lesson for him.

“He understands that when you are a manager, you can have an impact on your team, but now he knows what it is like to feel helpless on the bench.

“When you are a player, you have the power to change what it’s happening on the pitch. Now he is not a manager 100 per-cent as he is still learning what it is like to have some of his power taken away and, as well, how to behave.

“He is still learning how to pick a team, set up his tactics, his man management skills and, on top of that as well, his body language and his communication needs to improve if he is to succeed as a coach.”