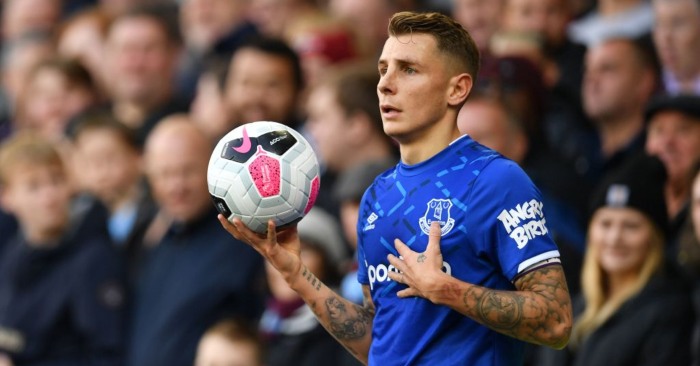 What does a full-back do?

Okay, a silly question. We all know the answer. A full-back sends in crosses, stops opposing wingers and, where appropriate, refuses to shake John Terry’s hand. But in truth a full-back’s job is much more complex, and when you fully follow a full-back for a full 90 minutes you gain an understanding of their various duties.

That’s what I did last weekend, and in this space I’ll tell you what I learned. The full-back in question is Lucas Digne, who played left-back in Everton’s 2-0 win over West Ham at Goodison Park. In some ways it was an atypical match: Everton dominated so thoroughly that Digne’s average position was in the opposite half. Also, as we’ll see, Digne never found himself in two of the most common full-back situations. But over the course of the match he managed to do almost all the things a full-back normally does, and we can easily fill in the rest.

(A couple of notes. First, we’ll leave out Digne’s frequent set-piece duties and stick to the demands of the specific position. Second, West Ham, like Everton, played with full-backs and wingers, and that’s reflected in the match-ups discussed below. With wing-backs, things would look somewhat different.)

Let’s start with defence, and the most basic full-back task: tracking the opposing winger. At various times West Ham deployed Pablo Fornals (first 25 minutes), Felipe Anderson (rest of first half) and Andriy Yarmolenko (second half) in that position. When Everton were defending, or when the ball was up for grabs in midfield, Digne kept an eye on his man, at appropriate moments moving a bit forward and back as his opponent did so.

But that wasn’t always possible. At one point West Ham unexpectedly broke quickly through midfield, and Digne was forced to track striker Sébastien Haller, leaving Yarmolenko alone on the wing. Fortunately, the Hammers couldn’t get him the ball.

Back to tracking the winger: because Everton frequently pressed high, a related task was to body up to the winger when it looked like he would receive the ball. Digne did this consistently and well, once forcing a turnover.

On a related note, Digne never actually had to contest a ball when a cross came in from the other side to the back post. But in the few cases when such a situation threatened, he got into the appropriate position.

A final tracking case is when the full-back is in line with the other defenders, and the winger makes a diagonal run into the box, hoping for a pass. Then the full-back has to decide whether to track the run or stay in position. Both times when Yarmolenko made the run, Digne initially followed, but when it became clear the pass wasn’t coming, he got quickly back in line.

We are back , we are TOGETHER 👊🏻😊🏟 what a spirit and what an atmosphere again 😍💙 @everton #nevergiveup #victory #headup pic.twitter.com/KYJrmS93Rk

This could change under certain circumstances. In one case, Digne was marking winger Felipe Anderson, but Anderson then retreated, allowing Digne to challenge Fredericks when he got the ball. In another, the situation required Digne and Bernard to communicate so that Bernard took Yarmolenko and Digne took Fredericks.

What happens, though, when you face a quick passing sequence and your winger can’t or doesn’t do his defensive job? The full-back can be on his own then. This happened twice, when Bernard couldn’t follow either Fredericks or Mark Noble. As Fredericks/Noble went up the line with the ball, Digne had to move quickly to defend. He made a fine tackle on Noble for a throw-in, but Fredericks got by him.

Next are the wide variety of cases when the winger has the ball and the full-back is faced with 1-v-1 defending. For example, if the full-back is facing the opposing goal and the winger is positioned in front of him, he has to decide whether to advance and challenge, or stay in the back four. Digne always played this conservatively, and in one case Yarmolenko was able to start a passing sequence that led to a West Ham free-kick in a dangerous position.

Another common case came when a switch in play found Yarmolenko with the ball in space near the touchline, and he drove directly at Digne in the area. Digne got into position well and won the ball.

Yet another situation found Yarmolenko moving into the middle of the pitch with the ball on his favoured left foot, a fair distance from goal. In this case the full-back has to choose to let him go or mark, and Digne marked until Yarmolenko switched play with a diagonal ball.

Oddly enough, Digne never had to face the classic 1-v-1 with the winger driving toward the line. But in the case noted above where he and Bernard switched men, Yarmolenko did get to the line, and Digne had to adjust and perform another standard full-back task: blocking the cross. The cross actually got through and West Ham managed a decent scoring chance.

One more: a full-back sometimes has to face his opposing winger used as a target man. Several times the ball was sent long to Yarmolenko. Although there were no pure aerial duels, once Digne bodied up to his man, and Yarmolenko did well to control the ball on his chest and pass to a teammate. Another time the long ball missed its target and Digne moved over to provide a headed clearance. Since West Ham didn’t accomplish much in attack, Digne didn’t have to clear the ball often, but of course the clearance is a fundamental part of a full-back’s defensive duty.

Finally to something we’ve left out, because it’s the default setting: unless specifically called upon to do otherwise, the full-back has to stay in line with the rest of the back four. Digne did this extremely well; in fact, the whole back four held its line efficiently throughout the match.

Now to attack – or not quite yet. That’s because the full-back is expected to cover the entire length of the pitch, and one of his most important tasks is to decide when to go forward and when to stay back. The decision sometimes has to be made in a fraction of a second, and can have crucial consequences.

Let’s look at the easiest case first. When his team is attacking on the opposite side of the pitch, the full-back will often stay back, and Digne did this consistently. But equally consistently, when it looked like play would be switched, he raced up the line to be available for a pass. Several times he wound up receiving the ball in space, where he could deliver a cross.

Sometimes, though, the choice is more difficult. At one point Digne’s diagonal pass to Bernard towards the middle of the pitch was intercepted, and Digne was faced with going forward to win the ball back or retreating to defend. He chose the first option, unsuccessfully, and was well out of position, although West Ham couldn’t take advantage.

Even what appear to be simple choices don’t always work out. At one point, Digne saw Bernard in possession and started up the line, but a turnover left him stranded. Anderson got the ball and was able to drive forward into the vacated spot.

An instructive moment came when Digne had to reverse his decision in relatively short order. Everton had a throw-in on the other side of the pitch not far inside the opposition half, and Digne took up a spot level with the thrower. The throw-in went back to Everton’s half, so Digne walked back, increasing to a trot when Tom Davies came under pressure. But Davies turned and sent a fine pass into the attacking half, so Digne reversed and started forward. A moment later Alex Iwobi, playing as a number 10, had the ball and was attacking toward Digne’s side, and Digne had to speed up the line to be available for a pass.

Moving now to the attack per se, let’s deal with those crosses. Three came from situations where the play was switched and thus Digne had space to deliver, and a fourth after he timed a forward run after a throw-in. He’s one of the best crossers in the league, but on Saturday he had little success. His first was a perfect ball to striker Richarlison, who volleyed home, but was whistled for a clear offside. The other three were fair to poor.

You’ll have noted that none of the crosses came from the standard full-back overlapping run. That’s because, quite remarkably, Digne didn’t make a single overlapping run behind his winger. Three times, though, he underlapped (I don’t like that word, but I can’t come up with better), and made himself available near the edge of the penalty area. As it turned out, in none of those instances could his teammates get him the ball.

There were other situations where Digne went up the line. Everton’s set-up included a play where Bernard started forward in an inside left position, at which point Digne would send him the ball and advance to receive a return pass in the attacking half. In one instance Bernard instead passed back to Andre Gomes, and Digne continued his run, taking Gomes’ long ball in space well up the pitch.

There didn’t need to be a set play for Digne to advance. At one point Everton had the ball on his side of the pitch in midfield, and he judged that a pass might be on if he made a forward run. He was right, but the pass hit him in the heel, and as it happened he was offside anyway.

Let’s now briefly cover a few of Digne’s miscellaneous attacking contributions. A few times he had the ball with space in front of him, and started up the line himself. A different situation saw him receive the ball in an advanced position and send a pass for Richarlison making a diagonal run. He also sent one long ball for Richarlison, and twice served as the out ball from Jordan Pickford.

There’s still one very distinctive full-back duty left. Take ten seconds to figure it out…five…three…one…zero. Yes, it’s the throw-in, the particular preserve of full-backs at all levels of the pyramid. To my knowledge, unlike their Merseyside neighbours, Everton don’t employ a throw-in coach. But someone evidently told Digne always to take the simplest option, since that’s what he did. A player would make a run to get close, and Digne would throw it to him. Incidentally, Digne also had the long throw-in job, but that’s not always a full-back’s duty, so we’ll let it lie.

We’re approaching 2000 words, and that’s not the whole story. There were several one-off situations arising from the natural flux of fluid play, and a share of moments when nothing was really happening, and Digne simply passed the ball back to Pickford or over to Yerry Mina, the left-sided centre-half. But we’ve covered all the major points.

Thus a full-back’s day job, variations on which you can explore any time with a match video and a stop-start-rewind remote. It won’t be a celebrated movie from a novel by a Nobel laureate (‘The Full-back’s Anxiety At The Overlapping Run’?), but it’ll be educational from kick-off to final whistle. And football education, as you know already, is always the best kind.