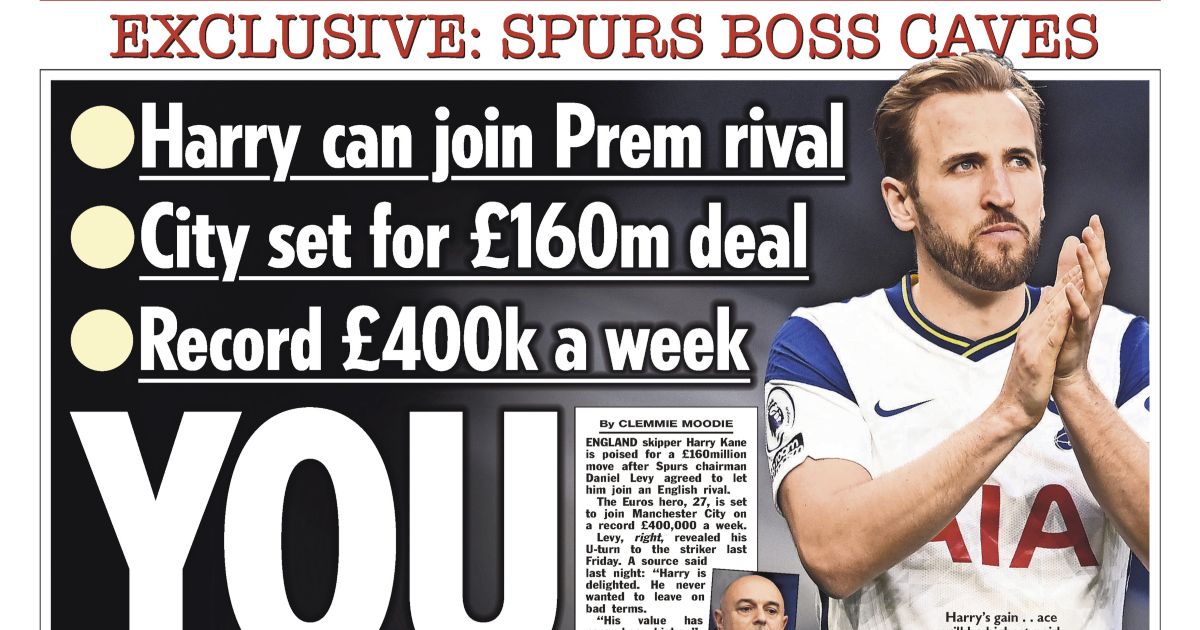 The first thing to say about this Harry Kane story in The Sun is that it’s objectively funny that a showbiz reporter has produced the football transfer scoop of the summer just by going to a wedding at which the groom was using his nuptials to share the news that his brother (Harry Kane) had been given the go-ahead to leave for £160m by Daniel Levy. That the newspaper’s actual football reporters then had to write as if that were all unquestionably true – regardless of their own contacts – makes that doubly funny.

We have detailed elsewhere that all the particulars seem believable, but what The Sun’s story stops short of saying – either by accident or design – is whether City are actually going to spend that £160m. And that’s quite important. It seems that Clemmie Moodie either did not ask or was not told that information.

Obviously that does not prevent a sub-headline of ‘City set for £160m deal’ on the front page of The Sun, which might well be news to Manchester City themselves. She then writes that ‘ENGLAND skipper is poised for a £160million move after Spurs chairman Daniel Levy agreed to let him join an English rival’. Hmmm. This is beginning to sound like one of those celebrity ‘hall passes’ that smug married couples give each other to allow a fantasy night with Megan Fox or George Clooney.

She adds that he is ‘set to join Manchester City’ and on the inside pages, she writes that Kane ‘told of his joy at the pending £160million Man City move’. We cannot help thinking that Kane might have told of his joy a bit too bloody soon as Tottenham are busy telling everybody on Friday that it’s bollocks.

The real amusement comes from looking at the sports pages, where the journalists battle manfully on with this indisputable information, despite it not really making any sense. So Martin Blackburn’s back-page exclusive talks of a ‘£225m summer spree’ for Kane and Jack Grealish alongside the revelation that Kane ‘is poised for a British record £160million move if Daniel Levy rubber-stamps the deal’.

Also, ‘Bernardo’s up for sale to fund rest of Kane bid’ is a hell of a reach from ‘Bernardo seems most likely to make way’.

On the inside pages, Paul Jiggins is here to write about the ‘news Tottenham fans have been dreading’.

‘Their chairman’s acceptance of defeat in his battle to keep the England captain has realised their worst fears – and shown how far the North London club has fallen in the last couple of years.’

And yet it was Jiggins – in partnership with Duncan Wright – that told us in May that ‘Spurs chairman Daniel Levy has placed a massive price tag on the Prem’s 22-goal top scorer’ and that price tag was named (by them) as £150m. Now you are acting surprised in July when Levy reportedly agrees to sell for £160m? And it’s a sign of how far Tottenham have fallen? Something does not quite make sense here.

‘Of course, there are still plenty of hoops still to be jumped through before Kane can seal the transfer he desperately wants to Manchester City in his pursuit of honours’.

You don’t say. Like the small matter of Manchester City offering to pay £160m, perhaps? That might be a pretty high hoop.

‘But the biggest one was navigated when Levy told his star player he is now looking for the right fee, instead of a reason to keep him.’

Nah. That’s not the biggest one. And you literally wrote two months ago that Levy would sell for £150m, when he was also presumably ‘looking for the right fee’.

Is it though? It doesn’t feel inevitable. Tottenham have told everybody who will listen on Friday that Kane is staying, while there is no indication that City have actually made a £160m bid.

Indeed, this is what Pep Guardiola said earlier this month:

“At the prices we are not going to buy any strikers, it is impossible, we cannot afford it. It’s impossible.

And we are supposed to believe just a few weeks later that City have agreed to pay £160m? Over double their transfer fee record?

Of course, no reports of an actual bid are not stopping others writing as if that is now a matter of record…

Elsewhere, the news is not quite official but close…

Somebody is going to wear out their ‘ key.