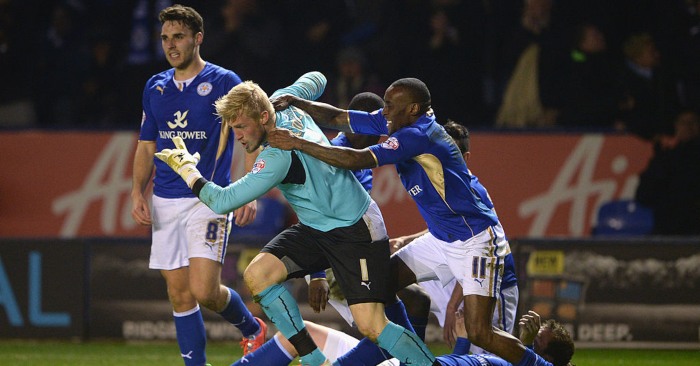 Fans absolutely love it when a goalkeeper scores. Often seen as football’s outcasts, keepers are perceived as a bit of a mad bunch – the drummer in the band, forever living with that unjustified tag of ‘not good enough to play outfield/sing’. It’s probably why we revel so much when goalkeepers score.

Of course we can appreciate a nimble reaction save, or a reckless dive to smother the ball at an attacker’s feet – but one can only imagine a keeper experiences an altogether different type of satisfaction after scoring a goal.

It’s their opportunity to remind us that they’re also highly skilled professionals.

Researching this article I came to understand two common threads concerning this type of goal. First, goals scored by goalkeepers are usually scored by the home team. Second, if you’re a keeper looking to score goals, Germany is the place to do it.

Indeed I have also been led to ponder, why is it that so many goals scored by goalkeepers are quality finishes? Perhaps it’s the lack of expectation or the absence of a fear of failure that leads to such exquisitely taken goals.

Also, while we’re at it, why do they always seem to have so much space in the box?! As a defender, surely the differently coloured shirt would be a prominent target in your peripheral vision. You shouldn’t really lose him.

As you mull over these questions, here is (to my knowledge) every awe-inspiring goal scored by goalkeepers currently plying their trade in one of Europe’s top four leagues (Premier League, Serie A, La Liga and the Bundesliga). Might they add to their tallies this season?

Claudio Bravo: Real Sociedad v Nàstic – Segunda División (14/2/2010)
Easily one of the most recognisable names on our list, Bravo has enjoyed a glittering career that has seen him play for European sides including Real Sociedad, Barcelona and Man City. The Chilean – now on the books at Real Betis after leaving City in the summer – is also the scorer of one of the more memorable goals in this category.

In February 2010 Bravo’s Sociedad found themselves locked in a four-way promotion tussle with Betis, Levante and Hércules. A particularly dark time in the club’s recent history, home games were a pressurised cauldron of expectation. This home tie versus Catalan side Nàstic was no different.

Just before half-time, with the game at a deadlock, Sociedad earned a free-kick on the edge of the box. Much to the delight of the crowd, Bravo trotted forward to take it…

A sweet strike to be sure, though not the most well-manned wall you’ll ever see. A bit of an anomaly too, in that it wasn’t scored in the dying minutes of the game.

Sociedad would go on to win the league that season, securing promotion back to La Liga after three long seasons in the Segunda División.

In October 2018, Gikiwicz’s Union team were enjoying an eight-match undefeated run that began on the opening day of the season. It was Union’s ninth consecutive season in the second tier of German football, and they were desperate for promotion to the big time.

1-0 down at home against FC Heidenheim and with seconds remaining on the clock, Gikiewicz, who had only signed from Bundesliga side SC Freiburg earlier that summer, endeared himself to the Berlin faithful in the best way possible.

Thanks to this late equaliser, Union maintained their unbeaten run, which stretched to a total of 17 matches. Union went on to secure promotion to the Bundesliga via the play-offs, relegating VfB Stuttgart in the process.

Gikiewicz was signed by Bavarian outfit FC Augsburg on a free transfer this summer.

Mark Flekken: VfL Osnabrück vs MSV Duisburg – 3. Liga (7/8/2016)
At the ripe goalkeeping age of 27, Flekken is the youngest player in this collection by quite a margin.

The Dutchman was signed by Duisburg in the summer of 2016, joining a side that had just been relegated to 3. Liga, the third tier of German football. Just two games into his Duisburg career, Flekken would become a cult hero…at least for a time.

After winning their season opener against Paderborn, Duisburg were away to Lower Saxony side VfL Osnabrück in their next match. Trailing 1-0, they won a corner in the dying seconds. Throwing caution to the wind they sent 6′ 2″ Flekken forward, then this happened:

You can’t help but feel there was a missed opportunity for some catchy commentary lines here. How often does a Flekken score with a flick?

Duisburg secured their promotion to 2. Bundesliga later that season, but have unfortunately since slipped back down to 3. Liga.

As for Flekken? Well, it hasn’t been all roses for the keeper, who now finds himself second-choice keeper at Bundesliga side SC Freiburg. In February 2018, while still at Duisburg, he had this moment to forget:

Now that’s how to take the word ‘hero’ out of the desccription.

Kasper Schmeichel: Leicester City vs Yeovil Town – The Championship (25/3/2014)
Ah, the good old days before goal-line technology. It’s moments like this one that brought about the technological advancement of our modern game.

The only non-goal on our list, this injustice occurred during Leicester’s 2013-2014 promotion-winning season. 1-0 down at home to rock-bottom Yeovil Town, and with time running out, Kasper, son of Peter (the first of his name) pushed up front, emulating his father’s heroics for Aston Villa back in 2001.

Thankfully Chris Wood was there to follow up, but the ball is very clearly over the line by quite some margin. In the aftermath, the league’s dubious goals panel backed the officials ruling on the day and Schmeichel was stripped of his glory.

If I were Mr Schmeichel I would be seething to this day.

The first is his close-range finish in the dying embers of a fiery Bundesliga tie against Leverkusen back in 2015.

After three consecutive seasons in the top tier of German football, Augsburg had firmly established themselves as a club on the up. In late February they met a sixth-place Leverkusen in a Champions League qualifying crunch match – with Augsburg siting one place higher in fifth.

With Augsburg trailing to the visitors 2-1, and mere seconds left on the clock – enter Swiss international Hitz…

Leverkusen would however have the last laugh that season, qualifying for the Champions League at the expense of fifth-place Augsburg.

Unfortunately for Hitz he will also be remembered for a rather public case of unsportsmanlike behaviour. In a 2015 match against FC Köln, which Augsburg went on to win, he sabotaged Anthony Modeste’s penalty:

Hitz was subsequently fined €122 by Köln for the damage caused to the pitch – which he paid, having promptly apologised for his actions.

Despite this incident he will mostly be remembered for his goal, which has to go down as one of the greatest Hitz of the decade (I couldn’t help myself).

Philipp Tschauner: FC St. Pauli vs Paderborn 07 – 2. Bundesliga (1/4/2013)
As a youngster at FC Nürnberg, great things were expected of Tschauner, a regular fixture in the German U20 team, but his club career didn’t really get going until he joined Hamburg side St. Pauli in 2011.

Fast-forward two years and Tschauner had established himself as first-choice keeper at St.Pauli. In early April of 2013 they played fellow mid-table side Paderborn in a match that will live in infamy, at least in the Tschauner household.

With his side trailing 2-1, Tschauner could be seen rushing forward, demanding the corner be struck in his direction…

‘Es war Tschauner!’ is a phrase that should send chills down any St. Pauli fan’s back.

Tschauner is now at RB Leipzig, but, since joining in 2019, he has yet to make a league appearance for the Saxony club.

Silvio Proto: Germinal Beerschot vs K.A.A. Gent – Jupiler Pro League (28/9/2008)
Silvestro ‘Silvio’ Proto is a Belgian goalkeeper, currently on the books at Lazio, and the scorer of one of the most impressive finishes by a goalkeeper you’re ever likely to see.

37 year-old Proto, who has earned 13 international caps for Belgium, was on loan at Flemish side Germinal Beerschot from Anderlecht for the 2008–2009 season. Their north-western opponents Gent were a side pushing for European qualification that season, while Beerschot were expected to be part of a relegation battle.

2-1 down, and with seconds remaining, 6ft Proto timed his run into the box to perfection – powering a header into the corner of the net beyond a static Ljubojević in the Gent goal.

My apologies for the quality of the video – the finish is a lot more visible on the subsequent replays.

Iago Herrerín: Atletico Madrid B vs Getafe B – Segunda División B (8/1/2011)
Basque-born Herrerín’s moment of glory came during a two-year spell at Atletico Madrid, while playing for their B team against Getafe B in the third tier of Spanish football.

By all accounts this Madrid derby was a real epic encounter, played out in horrific conditions. The mid-season clash held significance for both sides, with Getafe pushing for promotion and Atletico hovering precariously above the relegation zone.

Rain bucketing down, Atletico raced into a 2-0 lead, before being pegged back to 2-2 by the visitors. In the 72nd minute Herrerín launched a free-kick into the Getafe box from well inside his own half. The ball skidded off the slick surface, deceiving Getafe keeper Gonzalo, and ended up in the corner of the net.

Unfortunately I wasn’t able to locate footage of this goal, just a match report. If any of you readers can, I’d love to see it.

I do, however, have a compensatory offering in the form of a killer pass by the same keeper.

Our friend Herrerín holds another record for being the first goalkeeper to register an assist for Bilbao in La Liga in the 21st century.

Eldin Jakupović: Grasshopper Zürich vs BSC Young Boys – Swiss Super League (30/08/2007)
Swiss international Jakupović was brought to England by Hull City in 2014. In 2017 he moved to Leicester, where he remains as an understudy to this day.

While on loan at Grasshopper Zürich during the 2007-2008 season he scored a 94th-minute leveller, at home against top-four rivals Young Boys.

Oh and I have heard that Crystal Palace’s Wayne Hennessey scored a goal for Wales U-19, but I cannot validate it. Was it a stunning strike? If you’re reading this, Mr Hennessey, I’d like details.