Home Burnley Examining the facts and theories behind Burnley’s decline 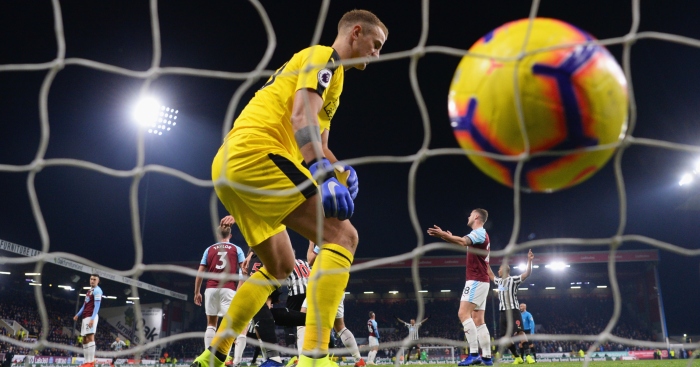 Things are going badly for Burnley this season. How badly? They’ve just appointed a Technical Director – who earlier in his career worked for Blackburn Rovers. That’s badly. But then we expected trouble at Turf Moor, right? The Clarets overachieved last year, and are just finding their level again, right?

Maybe. But no story is that simple, even in football. Burnley’s season so far has a number of intriguing features, both on and off the pitch. If we can’t find definitive reasons for the nosedive, we can at least present a few facts and theories, gleaned both from personal observation and reading/listening to Clarets fans on the web.

Fact: Burnley’s defence is terrible.
We know that Burnley set up to allow plenty of shots, but last year’s reasonable 14.8/match is now all the way up to 20.8. In the 13 full seasons the stat has been recorded, no team has allowed more than 18.2. And since xGA/shot shows that the shots they’re conceding this year are significantly more dangerous, opponents’ conversion rate has jumped from 6.9% to 10.0%. The Clarets are allowing almost exactly a goal per game more than last year.

Theory: It’s all Joe Hart’s fault.
It’s tempting. Although Charlie Taylor has taken over for Stephen Ward at left-back, the biggest change has been in goal. Nick Pope was brilliant last year, but a shoulder injury has sidelined him all season. The most comprehensive shot-stopping rankings have Hart ninth in the league, which isn’t bad at all, but can’t match what Pope did last season. With the extra volume of more difficult shots coming in, it’s all the more damaging.

Then there’s the much trickier matter of defensive organisation. With rare exceptions – Shay Given is the textbook example – it’s hard to know how a keeper affects the back line. At the moment, though, anyone can see that Burnley’s defence doesn’t have last year’s discipline. James Tarkowski has looked particularly uncertain, and the unit as a whole are allowing deeper penetration from attacks. Is it to any degree Hart’s fault? Sean Dyche doesn’t seem to think so, because Tom Heaton is still sitting on the bench.

And that’s the trickiest matter of all. Some Clarets fans have argued that by playing Hart over Heaton, Dyche has unsettled the team. Heaton was and is the team captain, and a keeper of proven excellence. He’s known to be extremely unhappy with the situation. Promoting an outsider of uneven reputation is not a move to be taken lightly. The players are professionals, but they’re also people. The overall atmosphere can affect performance in all areas.

Either way, a look at the relevant numbers favours Heaton over Hart. Opponents’ shot conversion in 2016/17 under Heaton was 8.2%, lower than under Hart so far. Opponents’ xG/shot that season was lower than even under Pope last year. So the defence was better. Of course we can’t say it’s all Hart’s fault – but it certainly looks as if he hasn’t improved matters.

Fact: Burnley failed to qualify for the Europa League group stages, in part because Sean Dyche didn’t always play his first eleven.
Dyche named his strongest side for both legs of the opening tie against Aberdeen. But against Istanbul Basaksehir and then Olympiakos, games which butted up against the Premier League, names like Phil Bardsley, Jonathan Walters, Kevin Long, Ben Gibson, and Dwight McNeil appeared in the starting line-up.

Theory: By not going all out to win the matches, Dyche may have alienated important players who wanted to test themselves in European competition.
Your guess is as good as mine on this one. Debates over Europa rotation are and will be endless. But it’s not out of the question. As above, they’re both professionals and people. Fans have a right to wonder.

Fact: Burnley’s attack is a little worse than last year.
Last year Burnley were hardly free-scoring. They managed 36 goals all season, not even one per match. This year they’re actually doing slightly better, with 13 goals in 13 games. But shots, shots on target, and xG/match are all down. At the moment they’re over-performing their xG by a couple of goals. At very best it’s a wash.

Theory: Sean Dyche’s tactics and personnel decisions have missed the mark.
For a stretch last season we saw a different Burnley. With a change from 4-4-2 to 4-2-3-1, the side kept the ball on the carpet more, and played some genuine possession football. Consecutive weekends in November produced a dominant first half against Swansea and a first 45 against Arsenal where the Clarets actually outpassed the Gunners.

But Dyche may never have felt comfortable with the extra man in midfield. At some point in the second half of games he would drop a midfielder (usually Jeff Hendrick) and bring in a second striker. In the latter part of the season, when the 4-2-3-1 wasn’t doing as well as before, and the extra striker was producing late dividends, he decided 4-4-2 was the way to go after all.

Fair enough, and you can’t argue with seventh place, although 36 goals aren’t the strongest return. This season Dyche at first went back to 4-2-3-1 plus second striker substitution, but as early as the fifth match, at Wolves, it was 4-4-2 again. Burnley lost 1-0. So Dyche tried something new: he brought in summer acquisition Matej Vydra to act as support striker. Instead of two big men, it was little and large, quick and strong. Successive wins over Bournemouth at home (Vydra scoring the opener) and Cardiff away followed immediately. The side had a system and a plan.

Then, inexplicably, Vydra was dropped for the next match, home against bottom Huddersfield. It was 4-4-2 with Sam Vokes and Ashley Barnes. The performance was dire. Burnley managed a 1-1 draw, but were outshot 19-6. Vydra was only brought on for Vokes in the 90th minute. He would start just one of the following five matches, four losses and a draw. Two of the games were against Manchester City and Chelsea, so the side would probably still have lost. But if a team wins twice with a new player in the line-up, it makes sense to give him a run of games and see how things turn out.

Last Monday night was particularly disheartening. A 4-4-2 strike pair of Vokes and Chris Wood had achieved little the previous week at Leicester, but in a six-pointer against Newcastle, there they were again. Burnley were down 0-2 within 23 minutes, and looked unlikely to compete at all until an out-of-nowhere 40th minute header by Vokes. He would go on to have a very fine game. But although Wood was off form, and it was clear Burnley were losing the midfield battle, Dyche, as is his wont, stuck with two big men. Hendrick and Barnes only came on in the 83rd minute, and although Vokes nearly netted a late equaliser, a draw would have flattered the side.

No one is claiming Vydra is the saviour – he’s unproven at Premier League level – but under the circumstances his absence has been hard to understand. Then there’s the Steven Defour situation. He’s a fine technical midfielder, but not really suited to a 4-4-2 with two big strikers. He’s at his best with passing combinations in a three-man central midfield, or with a quick-passing support striker. It feels like Dyche isn’t getting the maximum there. If Vydra isn’t up to it, maybe it’s time to bring Hendrick back.

You can argue the side isn’t doing much worse than last year, attack-wise. But the point is that the defence is significantly worse, and so the attack has to improve. The 4-4-2 with twin towers has reached its limits. And although no one expects another seventh-place finish, fans can reasonably hope for a longish Premier League stay, and for that you need progress. Tactically, the season so far looks like a step back.

Fact: The club has under-performed in the transfer market.
This is of necessity a matter of opinion. But since promotion, transfer window performance seems to have declined. Here’s the sequence, listing only the major contributors and/or biggest-money signings:

Brady and Gibson have had bad luck with injuries. At the moment Taylor is doing OK at left-back, and Westwood has made some decent contributions. But Cork and Wood have been unable to sustain their performance levels, and Lennon looks half the player he was last spring. As for Hart and Vydra, see above. Of the full list, only Pope and maybe Gudmundsson have been revelations.

Theory: The club hasn’t done enough scouting on the continent.
Clarets fans accept this as a given. Right now Defour is the only player on the entire squad signed directly from a continental club. Burnley don’t have a lot of money, so they need to cast their net as wide as possible for bargains. It looks as if management agree: hence the aforementioned Technical Director. His name is Mike Rigg, and the best item on his CV is Head of Player Acquisition at Manchester City 2008-2012, when the money was first rolling in. Since then he’s bounced around a bit.

His tenure literally starts tomorrow. He’s talked the talk about working closely with Sean Dyche, understanding the club ethos, and so on. The initial test will be the January window, only a month away. My guess is his first target will be a true holding midfielder, something the side sorely lacks. A creative midfielder would be nice too, but those are very hard to find at low prices. In any case, the decision can’t be made without consulting Dyche and considering his tactics. Their relationship will be crucial.

So in a sense, the season begins again Saturday at 3pm. If you wonder whether Burnley have had an unfavorable fixture list so far, the answer is no. In fact, it’s been on the easy side of the line. The next six matches include Liverpool (H), Tottenham (A), Arsenal (A), and Everton (H).

Saturday, though, it’s Crystal Palace at Selhurst Park. The Eagles are famously poor at home, having scored only two goals in six matches. They even lost to Southampton. So not only is this winnable, but three points and Burnley would leapfrog Palace in the table.

There are no certainties in football, but this is the closest I can think of: at some point during the telecast, the camera will show Mike Rigg in the VIP box, looking serious. Usually that’s just for show, but if Burnley want to stay up, seriousness is called for. You and I can afford to speculate about the problems; Rigg and Dyche will have to provide the solutions. Still, it’s fine margins at the bottom, so a few right decisions, even from a former Rovers scout, can yet take the troubles from Turf Moor.