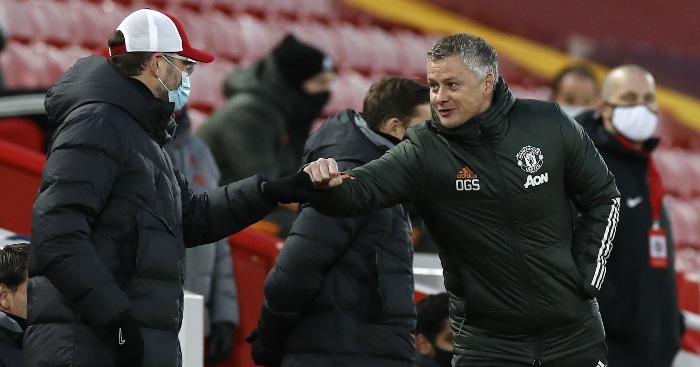 Liverpool’s Premier League clash with Man United last week was far from a classic but both teams will get another shot at each other when they meet in an FA Cup fourth round tie.

Speaking on the latest edition of ‘Big Weekend on YouTube’, Mark Smith and Sarah Winterburn suggested that Sunday’s game might not be too different from what we saw last weekend.

Winty said: “I’m not sure there’ll be too many differences just because both teams can’t afford not to play their first team again. We saw Liverpool, even against Aston Villa’s kids, play something very close to their first team.

“Certainly against Man United, no one will want to give ground there at all. No one is going to go ‘I’m going to rest Mo Salah’ or ‘rest Bruno Fernandes.’ At the moment there’s no chance that either one of these teams wants to throw this away.

“Let’s all forget and ignore the fact that Man City are going to win the Premier League and pretend that it’s all about Liverpool and Man United because that suits the media narrative. Neither of them wants to throw it away.

“I think you’re going to see a similar game, a tight game once again. The sort of game last week where it didn’t quite get going. It got going a little bit too late. It’s almost as if Man United realised too late in the game that Liverpool where there for the taking. By the time they realised and acted upon it, the time was running out really.”