Home Johnny Nic Expectation is destroying our love of football… 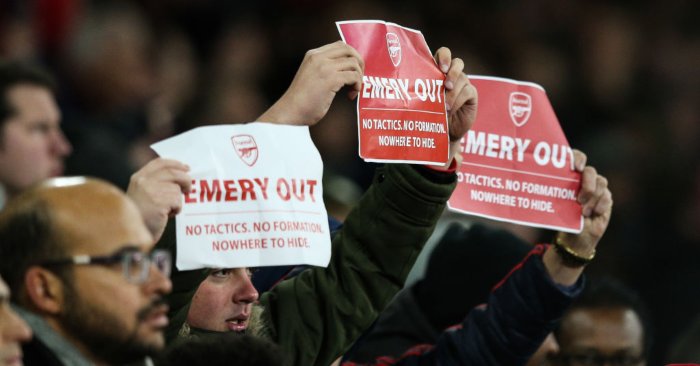 One of modern life’s more annoying manifestations is the one-star Amazon book review which says something like ‘I thought this was a thriller but it isn’t, it’s a cookbook’. In other words, the failure was of their expectations and not of the book. There is nothing worse than being judged negatively for not being what someone expects, when that expectation was born out of ignorance in the first place. On such habits are many divorces based, I imagine.

But one of modern football’s most powerful drivers and most corrosive elements is exactly that: expectation. If little is expected of the club, then it’s hard to disappoint; if a lot is expected, then it is very easy to disappoint and perhaps inevitable that you will. Today there seems to be an awful lot of expectations leading to disappointment and much waging of war on managers, players and officials when those expectations are not met.

This is a relatively modern thing. Before Big Money came into the game, certainly for fans of a club like Middlesbrough, I don’t recall ever having any real expectations of my club. We just went, we witnessed whatever happened and then returned home again, happy, annoyed or bored. At the start of a season we wondered how well we would do and hoped for some success, but expect it? No. It was what it was, whatever happened simply happened. I still have no expectations of them now. It just seems so presumptive and I don’t see what anyone gets out of it. Yes, have hope and dreams of glory, but do not under any circumstances expect anything.

Back in the day, the democratising effect of a flattened financial pyramid allowed the clubs that developed talent and recruited well to have a chance of winning a title or cup, or at least of doing quite well. Unpredictability was more common, which made any expectations little more than a vague guess. This is much less so today in the Premier League at least, so perhaps expectation is rooted in the contradiction of assumed predictability and that predictability is set in place by wealth. Money’s siren song manifests expectations.

We see football almost entirely through a financial lens so big spenders expect to be higher up the league than lower spenders, because that’s how life is sold to us under this economic model. The rich are better than the poor. The rich have succeeded, the poor have failed. The rich are hard-working and deserving, the poor are feckless and undeserving. We take this knowledge into football.

Once a player’s quality is wholly defined by the size of his transfer fees or wages, as though humans are predictable products that are as unchanging as well-made furniture, you’ve got a culture through which expectation is intricately laced.

We’ve paid a lot to watch this, we’ve paid a lot for you and we have made you richer than Croesus, so you’ll deliver and you’ll deliver now. This is the minimum of what we expect in a money-based culture because if we don’t expect anything for our money, what is it all for? Not believing in the superiority of wealth undermines everything. So we get dragged into believing in it and thus we have expectations.

This brutal commodification culture means players are judged in the same way we’d judge anything else we buy in the overly deified free market that is anything but free. If you buy an expensive car, you absolutely expect it to perform to the maximum immediately. You don’t expect it to have a period of adjustment or settling in. So when a player comes in for a substantial fee, there’s now a powerful, irresistible expectation that they will perform well straight away, like the car. Failure to appreciate that footballers are not products but organic unpredictable lifeforms, is one of the architects of modern-day toxic expectation. Big Money has warped our minds and turned sport into supply and demand economics while pretending decency’s death throes are really just dance moves.

History is also now used to impose expectations. Arsenal fans are disgruntled that their club is not in the top three or four because for a couple of decades they were, so their expectation is that they should be. But after winning the double in the 1970-1971 season, by 1973-1976 they were finishing 10th, 16th and 17th and there really didn’t seem to be quite the same sort of outrage about it. Obviously, there was no Fan TV to angrily fellate their own negativity to a messy orgasm of hate, but to expect that the future should always be a continuation of the past is a delusion that Big Money’s get-what-you-pay-for mindwipe has sold as an inviolate truth.

But more importantly still, this pressure of expectation is having big economic repercussions. It is one of the main driving forces behind the financial unsustainability of lower-league football, which in turn is leading to situations where the very viability of our clubs – and by extension some of the civic ties that bind us to our communities, past, present and future – are being put in jeopardy because the more that is expected of a club by its fans, the more demands to spend and the more owners will break the bank and put the club in danger to try and reach the land of milk and honey in the Premier League.

This culture of unthinking, unrealistic expectations has led to paying an average wage in the Championship of £16,000 per week when £5,000 is the sustainable maximum. And still there are many fans who want their club to buy more players and attract players with big wages, accusing those who won’t fritter away money that they don’t have as ‘lacking ambition’. I even see this at Middlesbrough now. Expectation, ambition and entitlement have been conflated into one very toxic, unhappy culture.

When did expecting little and just hoping for the best go out of style? If you have little or no expectations for your club on the pitch, you will never be disappointed, but you do stand a chance of being pleasantly surprised. That’s better for the future of the game and a better, happier way to live our football lives instead of forever feeling the club isn’t meeting our expectations.

Now, more than ever, in football and in life, give peace a chance.