Home Liverpool F365 Says: Liverpool must bring shock, awe and so much fire 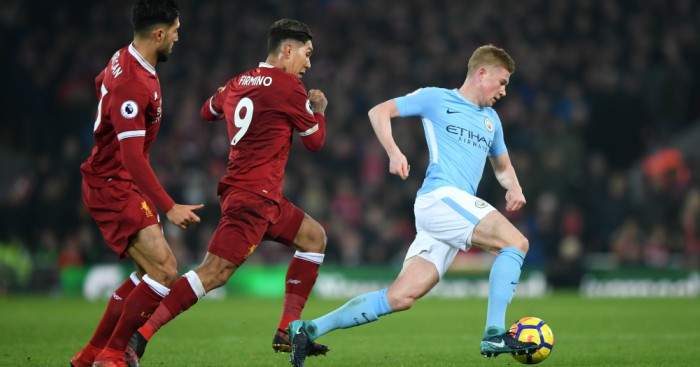 ‘They were pummelled into submission by a Liverpool side which grabbed their illustrious opponents by the scruff of the neck and never let go until all signs of life had been squeezed out of them.’

Liverpool fans would certainly welcome those same words being used again in an Echo report of their clash with Manchester City on Wednesday night; they will certainly need a similarly bombastic, breathless performance against one of the greatest English club sides in recent history. As Jurgen Klopp himself said: “There will be tactics but there will be fire.” In 2009 against Real Madrid, Rafa Benitez brought ‘fire’ and Madrid went home nursing third-degree burns. There was shock, there was awe and there was total destruction of a European superpower.

The BBC described Liverpool’s opening 20 minutes against Real Madrid at Anfield in 2009 as a ‘siege’; another report describes them ‘finally’ taking the lead in the 16th minute. I remember watching open-mouthed as Liverpool gave Madrid not even a second to acclimatise to the noise of Anfield, with Fernando Torres producing the devastating performance of a lifetime as the spearhead of this brilliantly dynamic team. They were utterly relentless.

In hindsight, it is easy to dismiss that Juande Ramos-coached Real side as weak and vulnerable, but this was a team that had been unbeaten in La Liga for three months. Read this line-up – Casillas, Ramos, Cannavaro, Pepe, Heinze, Diarra, Gago, Robben, Sneijder, Higuain, Raul – and argue that they should have been beaten 4-0 at Anfield in one of the great European shellackings. ‘Liverpool gave a provincial-looking Madrid a lesson in what Europe is,’ said one Spanish newspaper the following day. Benitez – a man so often derided as a defensive coach – had decided that the best form of attack that night was attack, attack, attack.

‘Esto es Anfield. Y que?’ was the question posing by Marca on the morning of the game. You do not need to be a linguistics professor to know that they were asking: ‘This is Anfield. So what?’.

By the end of the night, they knew exactly what. Marca, and Real Madrid, had learned what many had learned before – that if you give this Anfield crowd a reason to make noise, they will double your power. If you give nobody a minute to think, to ponder, to worry, fans will charge players and players will charge fans in an electrifying display of sustainable energy.

In 2009, Liverpool ultimately fall short. In 2005, when they ere triumphant, they mercilessly attacked Juventus at Anfield in the quarter-final. As then-manager Fabio Capello said: “The fantastic atmosphere at Anfield was like an electric shock for Liverpool’s players, who started the match at an astonishing tempo. They seemed unstoppable.” A few weeks later Chelsea were beaten, with captain John Terry later describing Anfield as “the worst and the best ground to go to”.

“In specific moments, we are on a similar level but they do it much more consistent, that’s why they have around 20 points more,” says Klopp, who was quick to point out that “in this game, it doesn’t mean too much”. This particular game is about 180 minutes in which Liverpool must somehow conjure enough ‘specific moments’ to triumph. And those ‘specific moments’ – as encapsulated in eight pulsating minutes in January – will come because (to borrow another Klopp word) they make life ‘unpleasant’ for City, by pressing and pushing and bursting through lines with intent and pace.

It has to be unpleasant. It has to be uncomfortable. It has to be unsettling. Liverpool must grab their illustrious opponents by the scruff of the neck and never let go until all signs of life have been squeezed out of them. It is their only way.