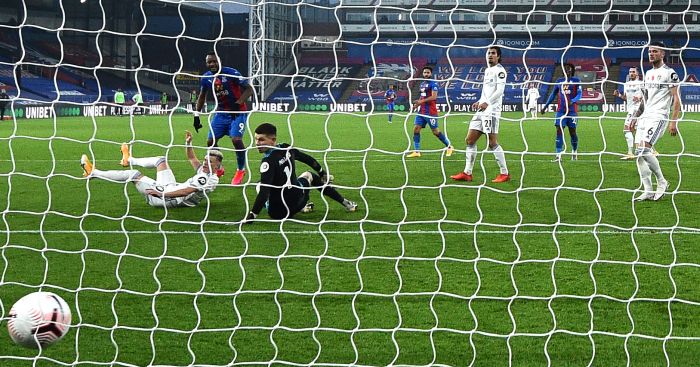 It’s all going wrong for Leeds. If you want to know just how bad things have got now, you need only look at the league table. They sit below even Manchester United. It’s a full-blown crisis, and Marcelo Bielsa is surely only days away from the tin tack.

Obviously not. Obviously this is not a crisis. In this congested table Leeds still sit one win away from fifth place in the table and only a point further adrift of fourth. Nothing is f***ed.

But in this of all seasons they are already in danger of wasting a glorious opportunity thanks to that troublingly leaky defence. The three goals they scored on the opening day against Liverpool quite rightly garnered more attention than the four they conceded. Loads of people concede four goals at Anfield, nothing about that was going to be shaping Leeds’ season in the same way the three goals they scored would be.

Now, though, conceding three or four goals a game is starting to happen a bit too often and against teams who aren’t among the best of the last 30 years. And now against a team with a dire home goalscoring record.

Crystal Palace away is nobody’s idea of an easy game – this win takes them sixth (itself a reminder of just how up for grabs things still are this year) and level on points with erstwhile title contenders Everton – but the one thing any competent side should feel reasonably confident about is not conceding a whole bunch of goals at Selhurst Park.

Before today, Palace had scored 18 home goals in their last 22 home Premier League games going back to the start of last season. They only managed 19 at home the season before that, and only reached even those dizzy heights thanks to one of those carefree, goal-laden, final-day-of-the-season games the Premier League does so well when they beat Bournemouth 5-3 in May 2019. That was also, until today, the only home game in the last two and a bit seasons where Palace had scored three goals. They reached that before half-time today.

If it was a freakishly successful day in front of goal for Palace, this was no one-off for Leeds who also shipped four to Leicester last time out and three in September’s home win against relegation fodder Fulham as well as at Anfield.

Harsh as it is to point out given we’re not yet halfway through the current round of fixtures, Leeds currently boast the Premier League’s leakiest defence. It is undoing so much good work.

There were plenty of caveats today. Kalvin Phillips is a big miss as a screen in front of that defence, while they didn’t have their full quota of attacking talents available either.

Most obviously of all, we’ll never know quite how this game would’ve panned out had Patrick Bamford’s equaliser at 1-“1” not been ruled out by a VAR offside call so thoroughly preposterous you’d imagine Stockley Park could come in useful if Donald Trump really wants to continue insisting he’s winning the election.

Yet the response to such a setback – and Leeds are not the first and won’t be the last to find themselves having to bounce back from such VAR grievances – cannot be as flimsy as this. Not from a team that still has so much potential to achieve something special this year.