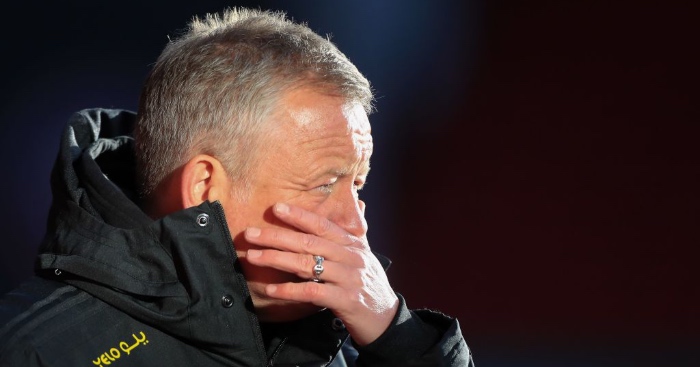 Sheffield United are only the the third team in Premier League history to have just one point after nine games. Both Manchester City in 1995-96 and Sheffield Wednesday in 1999-00 were relegated. Chris Wilder has got to find a way to create chances and score goals.

They are nowhere near as solid defensively as they were last season. They’ve conceded eight more than at the same stage and Wilder employed his fifth different back three on Sunday in an attempt to find a solution. But clean sheets won’t keep them in the Premier League; it’s the lack of attacking potency that is their undoing.

It’s not as though Wilder didn’t see the problem coming: he secured the club-record signing of Rhian Brewster in the summer. The striker hasn’t scored and didn’t really come close in his first three starts, but they were against Liverpool, Manchester City and Chelsea. To then leave him out of a game in which you would expect chances to be less of a premium was a bit odd.

Would Brewster have scored when Ollie McBurnie hit the bar? Or when he blasted it straight at the keeper? Would he have shown that little bit of composure amid two occasions of pinball in the first half?

It was Brewster’s brilliant control, turn and through ball having come off the bench that led to McBurnie’s crossbar-rattling shot. If the Liverpool academy graduate had been passing to himself, Sheffield United would likely have doubled their points tally for the season. Wilder has spent £23million on a striker able to convert the chances his other options consistently spurn: he can’t prove that if he doesn’t play him.

The Blades don’t create much and their xG of 0.69 against West Ham suggests the production of chances is just as much of a problem, and it is – the ever-changing overlapping centre-backs are having nowhere near the influence of last season and the midfield trio of Oliver Norwood, John Fleck and Sander Berge is looking more and more workmanlike with every game. But a season xG of 8.66 illustrates the woes of their ailing strikers when you consider they’ve scored just four. Wolves have an xG 6.92 and they have 12 more points.

West Ham really should have put the game to bed in the second half. But the goal for Sebastien Haller – a first-time strike from 20 yards – is worth more than any icing that could have been put on the cake. David Moyes will have been concerned that Michail Antonio’s injury would derail the Hammers’ more than serviceable start to the season: Haller chipping in will have delighted him.

Just five teams have ever scored fewer than Sheffield United’s four goals after nine Premier League games. Two of those have avoided the drop and Sheffield United of course still can. But the supreme confidence they built up last season has ebbed away; they need to start again.

This team can’t go back to basics, their style of football doesn’t allow it. West Brom next up is huge. Brewster has to start and someone has to score.