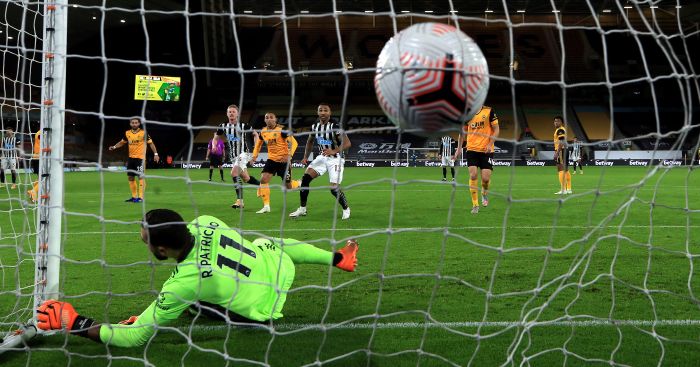 Whatever else happens in this world, it’s somehow reassuring to be reminded that Wolves are still Wolves. Lord knows we could all do with something familiar to cling to in this most baffling of seasons and traumatic of years.

But not for the first time we find ourselves looking at Wolves and asking why they have to be this way. Another non-event of a first half. Another Raul Jimenez second-half goal. Another missed opportunity. Another 1-1 draw with Newcastle – that’s four of those in a row now. In a table that has Everton at the summit of a top six including Villa, Leeds, Southampton and Palace, plus a bottom half that features Tottenham, Manchester City and Manchester United, where are Wolves? Seventh. Of course they’re seventh. They’re always seventh.

It’s worth noting that Wolves’ Plan A – which is also their Plans B through Z – had delivered successive 1-0 victories before this afternoon’s narrow failure to add a third, so it obviously isn’t a total write-off. If a 1-0 win over Fulham is too close for comfort, then a 1-0 win over Leeds is only going to look more and more impressive as the season wears on.

Yet that’s kind of the point. Wolves are the same beast no matter the opposition. Leeds away and Fulham at home are not the same test, yet Wolves’ approach remains the same. Snuff the game out for an hour, then try and grab a goal. In their third season in the Premier League they remain as capable as ever of a result against the best, and also of dropping points against the worst. They’ll go toe-to-toe with champions and then lose 4-0 to David Moyes, like some kind of largely Portuguese footballing Robin Hood.

Newcastle were absolutely there for the taking today, hampered by injuries and absences in midfield that forced them to play a team that on the face of it looked like harking back to the glory days of Kevin Keegan’s Entertainers. Ryan Fraser was handed a first Newcastle start, in central midfield obviously, and everywhere you looked there were wingers.

Yet it offered Newcastle the worst of both worlds. The myriad attacking talents never got the chance to do anything because they had a job on supporting a midfield that comprised almost entirely of Jeff Hendrick.

A team containing the quality Wolves possessed should have had a great time. But no. Wolves did what Wolves do. Newcastle sat back to such an extent that Wolves had 16 attempts on goal, yet with a total xG of just 0.69. Thanks to another familiar sight, a flash of genius from Jimenez, it was nearly enough. Only he will know what flash of inspiration led him to take up a position outside the box hunting the second ball from a free-kick on the left, but what a decision that would prove to be as he flashed a shot past Karl Darlow, who should have done better.

But it’s a high-wire act at both ends. Wolves were left not only relying on converting one of their low-quality chances but also Newcastle failing to take any of theirs. A wonkily-constructed wall and clever free-kick finish from Jacob Murphy later, and it’s all for nought.

Newcastle’s depleted side will be rightly delighted to sneak out of Wolverhampton with a point, and they deserve credit for the way they fought. But it’s impossible to shake the notion that they came up against an opponent who could have made it all so much harder.

Wolves are a very different side to Spurs in very many ways, but these late dropped points at home to Newcastle feel similar to Tottenham’s slip against the same side a month ago. It’s a failure of approach leading to a frustrating and unnecessary missed chance in a season that really could be full of opportunity.

On paper, Wolves are a better team than the one that has already finished seventh in successive Premier League seasons. They have no Europa League burden to make things harder this time. Every other team is wildly unpredictable and quite often rubbish. Wolves could do something truly special this season. They could be in the top four right now.

But they aren’t. And won’t be if they and Nuno Espirito Santo continue to insist on playing this way week after infuriating week.